The two new shows, ‘Neon’ and ‘Strides’ will be shown every evening…

It’s already home to a stunning light and laser display five days a week called ‘Light Up 2018’, and now the Burj Khalifa is the backdrop to two brand new LED shows. 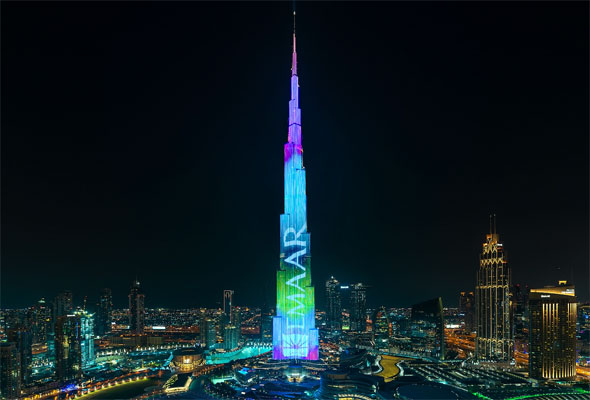 ‘Strides’, the first of the two shows, is described as ‘highlighting the duality between innovative technology and the breathtaking beauty of nature’. The second show, ‘Neon’ is set to be (as you might have guessed) focused around neon colours. So we’re expecting a kaleidoscope of bright colours in movement and plenty of Insta-worthy new geometric patterns.

These two new shows add to the existing light and laser show, currently displayed across the Burj five times a week.

Running until March 31, the New Year’s spectacle has also opened submissions for artists to have the chance to have their work beamed onto the Burj. Submissions can be made individually or as groups by those in the UAE or from across the world. The last date of submissions has just been extended- it’s now March 10.

Culture
News
EDITOR’S PICKS
Ramadan in Dubai: 38 iftars to try
READ MORE
Where can Dubai residents travel? Check out these 14 destinations
READ MORE
Rumours, facts and reveals: New Abu Dhabi bars and restaurants
READ MORE
UAE announces reduced working hours for Ramadan 2021
READ MORE
MOST POPULAR
5 ways to stay fit the fun way at Hudayriyat Island this Ramadan
How many days will we get off for Eid Al Fitr 2021?
Urban Outfitters' sister brand Anthropologie to open in The Dubai Mall
This double vacation offer includes stays in both Dubai and the Maldives
Dog of the Month: ubk launches unique social media competition
YOU SHOULD CHECK OUT
Our website uses cookies and other similar technologies to improve our site and your online experience. By continuing to use our website you consent to cookies being used. Read our privacy policy here.