Fresh from the news that two Dubai venues are to close down, a third Dubai stalwart is set to shut its doors, as Nasimi Beach has announced it will not reopen after May.

Nasimi is the latest outlet, joining Marina nightclub Societe and iconic outdoor Jumeirah bar 360, in the list of long-serving venue’s that will no longer be open for business.

But it’s not all bad news as Nasimi is set to bring Brit singer and producer Example for its final farewell party on Friday May 4. 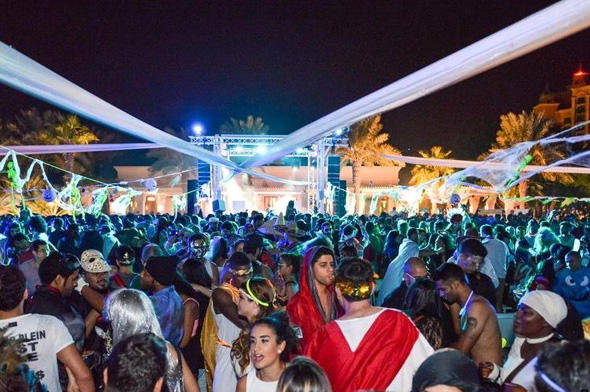 The day-to-night party will kick off at 11am, and entry will be free all day. In the day time, expect watersports, volleyball and lively acoustic sets beachside.

As night falls, Nasimi’s resident DJs will take to the decks, and there will be free drinks for ladies from 6pm to 8pm. Example is set to see out the night.

First rising to fame in 2009 when his second studio album debuted at Number 4 in the UK album chart, Example’s single Won’t Go Quietly, quickly climbed the UK charts. The singer and producer then went on to have a string of hits including Kickstarts, Changed The Way You Kiss Me, and Kids Again.

Special drinks deals of selected beverages at Dhs30 will be available all night.

In its eight years of operation, Nasimi has become the go-to venue for legendary Halloween parties, full moon parties and New Year’s Eve events. It’s also hosted an array of superstar DJs and artists including Hardwell, David Guetta and Avicii.

But it’s not the end for the space, as we’re advised that “an exciting new chapter” is set to open in the new season. Although details are being kept tightly under wraps, we can’t wait to see what it is.

Clubs
Nightlife
EDITOR’S PICKS
So, when is the next UAE public holiday in 2021?
READ MORE
All of the lavish new hotels set to open in Dubai in 2021
READ MORE
16 of the best pool passes in Dubai that are fully redeemable
READ MORE
All of the restaurants at West Beach, Palm Jumeirah
READ MORE
MOST POPULAR
Celebrate Christmas early with these 'Halfway to Christmas' brunches
Pics of the week: Your best photos of the UAE
What’s On The Bookshelf: Rom-coms great for reading on the beach
Book your holiday package from Dhs1,399 per person with Holidays by flydubai
Immersive cabaret concept The Theater Dubai opens its doors
YOU SHOULD CHECK OUT
Our website uses cookies and other similar technologies to improve our site and your online experience. By continuing to use our website you consent to cookies being used. Read our privacy policy here.