“Have you been to Namak yet?” That’s the question on everyone’s lips in the capital this month. The brainchild of celebrity Indian chef Kunal Kapur, Namak is one of the most exciting restaurant openings so far this year. So we signed up for a special tasting session to check it out.

Things got off to a quirky start with a novel welcome drink: a cold concoction called kalanamak, which blended lemon, toasted cumin and chaat masala creating a curious, warming sensation in our mouths and tummies, while the mini-kulcha amuse-bouche of green peas and cheddar made our mouths water. 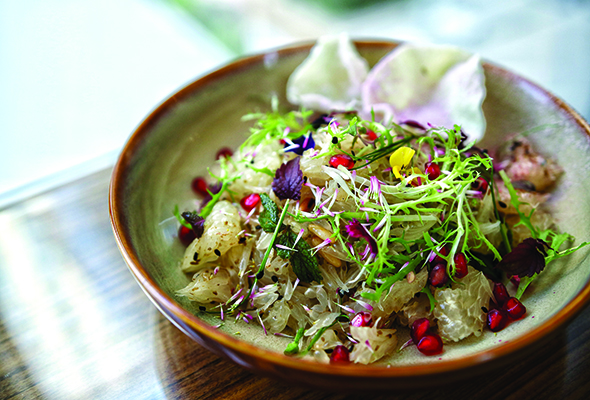 A smoked chicken soup starter was presented under a smoke-filled globe. Laced with hickory and cinnamon, it smelled like a campfire. It’s good but forgettable – ultimately tender pieces of chicken in a warm broth.

We couldn’t get enough of the Pomelo salad with black namak (Dhs50), however, where the contrast of roasted cumin with a fruity pop of pomelo and pomegranate was delicious. Another winning dish was the tacos (Dhs50): savory chicken tikka mixed with sweet apricot chutney, topped with crispy potato strings, and stuffed into a soft Tibetan tingmo bun.

ALSO READ: Review: The Oak Room restaurant at The Edition

The lamb chops starter (Dhs90/Dhs145), aptly labelled on the menu as fall-off-the-bone, arrived at the table very carefully, with our server handling the tandoori chops as though they were ancient artefacts. 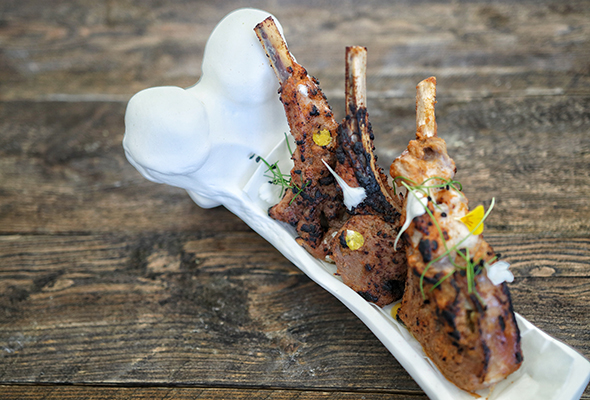 Another great example of Kapur’s ingenuity was the desi khao suey (Dhs 75/Dhs90/Dhs110). Typically a Burmese dish with crunchy noodles, Namak’s version used crushed poppadum’s, topped off with a rich, thick madras curry sauce. And probably the simplest item on the menu, but one of the best, the butter chicken (Dhs100) served with buttered roti was silken
and decadent.

If you’re not a fan of traditional Indian desserts, try the apple cinnamon shrikhand (Dh50) – a cinnamon flavoured yoghurt, which tasted just like rich and thick cheesecake.

Readers, here’s a tip: don’t just order one starter, main and dessert and be done with it. Instead, go hungry and take a food journey through Namak’s unique offerings. You’ll be glad you did.

Eat & Drink
Restaurants
EDITOR’S PICKS
So, when is the next UAE public holiday in 2021?
READ MORE
All of the lavish new hotels set to open in Dubai in 2021
READ MORE
16 of the best pool passes in Dubai that are fully redeemable
READ MORE
All of the restaurants at West Beach, Palm Jumeirah
READ MORE
MOST POPULAR
Abu Dhabi tourists can now get free vaccines through SEHA
Before and after: Stunning photos capture Dubai’s incredible transformation
Etihad wins Best Cabin Crew and Frequent Flyer Programme awards
Flash sale: This Dubai hotel has 40 per cent off and free attraction tickets
The best deals we've found in Amazon's Prime Day sale
YOU SHOULD CHECK OUT
Our website uses cookies and other similar technologies to improve our site and your online experience. By continuing to use our website you consent to cookies being used. Read our privacy policy here.