Review: The Oak Room at The Abu Dhabi Edition

Will Smith has waxed lyrical about this stylish steakhouse, but is it as good as the hype?

The opening of The Abu Dhabi Edition Hotel was big news in the capital. Designed by boutique hotel pioneer Ian Schrager, it’s the Edition brand’s first foray in the Middle East. For foodies though, the announcement that a top British chef was going to have three signature restaurants was most exciting.

Best known for being the youngest chef to be awarded a Michelin star (he was 26 when he received his first) Tom Aikens has teamed up with luxury hotel group Edition to curate the menus for three signature restaurants: healthy spot Market, Mediterranean-inspired Alba Terrace, and The Oak Room steakhouse, which we’re visiting first.

At The Oak Room, beef is the true star, with thick sides and cuts displayed behind glass reminiscent of the Crown Jewels in the Tower of London. 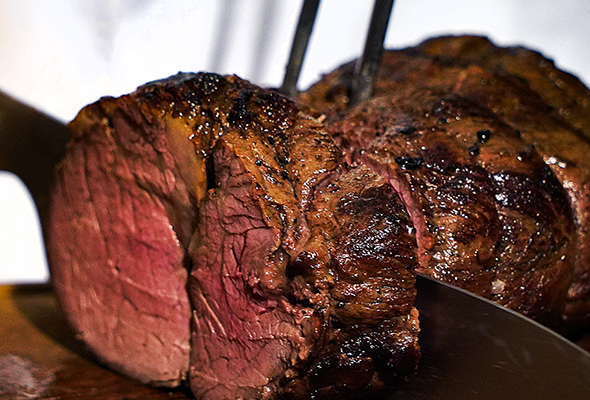 The 400g Spanish Rubia striploin, served bone-in came from a 30-year-old retired dairy cow, which the staff made sound like a good thing. All the rage in London in recent years, The Guardian described the Rubia trend as “the cool new thing is a hot old cow”. The Oak Room is the only restaurant in the UAE to stock this kind of meat, which upped our desire to try it. The generous, bone-in cut would have been truly satisfying had we not also ordered the 250g Black onyx striploin from Australia (Dhs150). It was a cut that required but a chew or two, simply melting in our mouths.

The mains are served with a delicate rocket and watercress salad, tossed in a tart shallot and lemon dressing. We also ordered buttered spinach and sweet potato fries (both Dhs30) as capable accompaniments.

The starters were great too: plump, Irish oysters ramped up with icy celery jelly, dill yoghurt and charred cucumber (Dhs170) and the finest beef tartare we’ve had in the UAE, served with pickled carrots, a dollop of parsley mayonnaise and confit egg yolk (Dhs100). Even the homemade sourdough bread with marmite butter deserves a mention.

The meal continued to make us smile during dessert, and it was a repeated clash of the spoons as we dug into a very unmessy Eaton mess (Dhs30) and a stellar sticky toffee date pudding (Dhs30).

If you rate actor Will Smith, who visited The Oak Room when he was in the capital for the Abu Dhabi Grand Prix, you might consider ordering the chicken, too. The chef told us Smith loved it so much on his first visit he returned the very next night – with a party of 16 – and ordered it again.

There is so much else to love about this restaurant, too: the hidden entrance, the heavy crystal glassware arranged by size behind the imposing bar, the leather chairs and velvet banquette seating, and the atmospheric lighting. And even on a Monday night, there were a respectable number of diners creating a lively din – prompting the kind of celebratory ambiance that’s rare to find in the capital on a weekday. A meaty marvel.

Best of
Eat & Drink
Restaurants
EDITOR’S PICKS
Ain Dubai will open with fireworks, live music and a drone show
READ MORE
Incredible Aura SkyPool to open in Palm Tower this November
READ MORE
Brit Grand Slam hero Emma Raducanu confirmed for Mubadala Tennis
READ MORE
What’s On Nightlife Awards 2021: Here are the nominees...
READ MORE
MOST POPULAR
Celebrate creativity at City Walk during this three-weekend event
This Heinz Beck brunch at Waldorf Astoria just got an upgrade
10 brilliant things to do in Abu Dhabi this long weekend: Oct 21 to 23
Experience Arabesque elegance at Asil's Saturday lunch
If there's one place to be this Halloween, it's Warehouse
YOU SHOULD CHECK OUT
Our website uses cookies and other similar technologies to improve our site and your online experience. By continuing to use our website you consent to cookies being used. Read our privacy policy here.