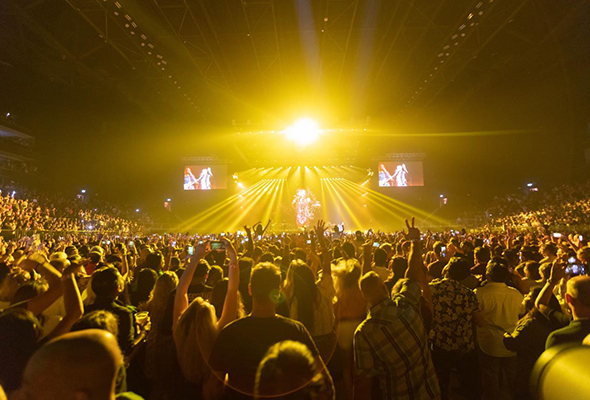 In case you’ve been living under a rock, you would know Maroon 5 played a sell-out gig at the Coca-Cola Arena this weekend. The band performed their hits songs to a crowd of 17,000 fans. Let’s see if they decide to squeeze in some sight-seeing before heading off again.

A post shared by Caesars Bluewaters Dubai (@caesarsbluewatersdubai) on Jun 11, 2019 at 1:53am PDT

Despite launching the Coca-Cola Arena with a stellar show over a week ago, funnyman Russell Peters decided to hang around in the UAE a bit longer. He stayed at Caesars Palace, being sure to sample all of the world-class restaurants the luxury resort has to offer, before moving on to Oman for another show.

Fashion queen Olivia Palermo is in Dubai launching her new collection with Karl Lagerfeld. The fashionista said on Instagram she is “ecstatic to see the #KarlxOlivia collaboration finally come to life at the Dubai pre-launch last night! Thank you to everyone who came out to support and especially the amazing Karl Lagerfeld team.”

Lisa Maffia, Romeo London and the rest of the So Solid Crew were in town to play a sold-out gig at The Hideout on Friday. The band also enjoyed a pool party at The Penthouse, while staying at FIVE Palm Jumeirah and a trip to the desert.

Chelsea’s Danny Drinkwater joins the stars and celebrities visiting #Dubai during the summer, to enjoy what the emirate has to offer from entertainment to sporting facilities. Dubai is considered one of the top destinations for stars around the world to visit during the holidays. pic.twitter.com/7nYruWAgvN

Chelsea footballer Danny Drinkwater is one of a host of footballing stars to make his way to Dubai this week. He was sure to keep his half a million Instagram followers up to date with his time in Dubai, describing the city as having “unreal weather, great restaurants, beautiful beaches, friendly people” in one post. We’d have to agree.

Barcelona player Ivan Rakitic has been enjoying family time in Dubai and Abu Dhabi, and keeping his followers updated as he goes. As well as paying a visit to Saif Belhasa’s farm, Rakitic shared pictures from Fairmont The Palm, dining at the beautiful Little Miss India.

English footballer Steven Taylor, has been in Dubai enjoying a relaxing time with friends. He stayed at Caesars Palace Bluewaters Dubai, according to their Instagram post, as well as checking out the Wow Suite in W Dubai – The Palm and Siddharta Lounge.

The Only Way is Essex star, Amber Turner has been sunning herself in Dubai with her beau and TOWIE co-star, Dan Edgar. The pair have visited DRIFT Beach Dubai, Toy Room Dubai, Bistrot Bagatelle, Sofitel The Palm and Nobu.

Spanish footballer Alexis Ruano, has been enjoying himself for a couple of weeks in Dubai. Kicking off the holiday with White’s closing party, the Al-ahli player also enjoyed a pool day at Zero Gravity before moving onto Jeddah, Saudi Arabia.

Love Island’s Ellie Jones and Ex on the Beach’s Bobby Ballard have been making memories in Dubai this week. Staying at Anantara the Palm, the pair have enjoyed a scuba diving session on the Palm, dinner at Asia Asia and a beach day at Zero Gravity.

Celebrities
News
EDITOR’S PICKS
So, when is the next UAE public holiday in 2021?
READ MORE
All of the lavish new hotels set to open in Dubai in 2021
READ MORE
16 of the best pool passes in Dubai that are fully redeemable
READ MORE
All of the restaurants at West Beach, Palm Jumeirah
READ MORE
MOST POPULAR
Review: Kinoya – from supper club to fully-fledged licensed restaurant
Abu Dhabi to relax certain rules in nurseries
Review: No. FiftySeven Boutique Café inside Mall of the Emirates
Al Ain Raceway temporarily closed after freak storm on Saturday
UAE 50: Here's your chance to have your photographs published in a coffee-table book
YOU SHOULD CHECK OUT
Our website uses cookies and other similar technologies to improve our site and your online experience. By continuing to use our website you consent to cookies being used. Read our privacy policy here.