Aladdin City is getting closer to becoming a reality...

It’s been a while since we’ve heard word of this magical new development, but it looks like plans for Aladdin City are ticking along nicely.

The spectacular location at Dubai Creek is now in “detailed design” stage, according to Dubai Municipality.

The development, inspired by the ancient legends of fictional heroes Aladdin and Sinbad, is made up of three golden structures designed to look like glimmering genie lamps.

“We have appointed Meinhardt Group as consultant and they are working on the design of the three buildings,” senior official Daoud Al Hajri told Arabian Business.

According to the latest promotional video – released earlier this year – the towers will be linked by air-conditioned bridges and walkways, and rise up over Dubai’s Dhow Wharfage.

The buildings – one 33-floor hotel and two commercial towers of 24 and 25 storeys – are expected to be designed in detail within 12 months.

“The concept design is there with the whole detailed design being completed in a year’s time,” Al Hajri told Arabian Business.

“We are not saying we will do construction tenders after that but it [the design study] will tell us a lot of things.” 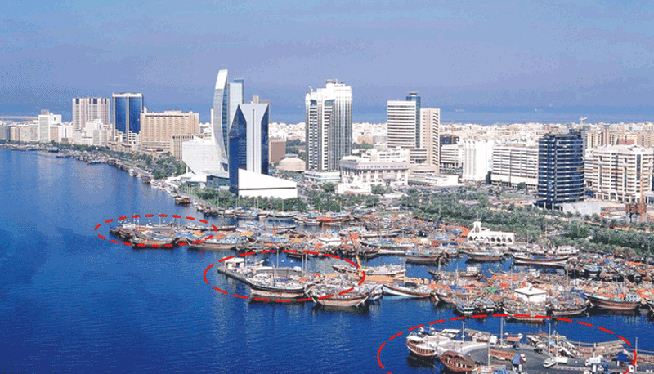 The towers will cover a total area of 110,000 square metres, while the attached bridges are said to be designed like dragons and lizards, further enhancing the mythological inspirations.

“The development of such a project in this area will have a global cultural and historical impact and pride for generations to come, and will contribute to the progress of the emirate and its dream to be No 1 in everything,” Hussain Nasser Lootah, Director-General of the Dubai Municipality, said when the project was announced in 2014.

“In addition, it is expected to boost Dubai economically in its long-term goals by increasing tourism in the emirate.”

The cost of the development and the projected completion date have not yet been revealed.