Here is Sheikh Mohammed's vision for the future of Dubai

Sheikh Mohammed has just launched the ‘UAE Strategy for the Future’, here’s what it’s all about…

So what is Dubai and the UAE’s future? We’re guessing the folk sitting around the emirates some fifty years ago didn’t imagine the city would look like how it does now in 2016.

What’s that you ask? Well, it’s a bit of a government roadmap to drive the UAE through its next phase of development, focusing on education, collaboration and strategy.

“As a nation, we have always been forward-looking and planning for the future, which has been a key driver of our success,” said Sheikh Mohammed. “The UAE Strategy for the Future is our new approach to planning for the future by predicting, analysing and implementing highly effective action plans that accelerate development.”

“To achieve its goals, we must work together and share responsibilities,” Sheikh Mohammed explained of the plan. “With our future planning model, we will serve as a model for the world. The citizens of the UAE are our most important resource in building our future. To nurture their skills, we will strengthen education and training initiatives.”

Here’s what we know about it so far… 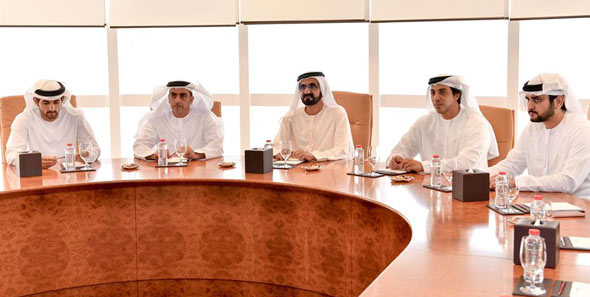 – The plan outlines the challenges for the future, and then points out long-term plans for meeting them and discusses the opportunities for development in the future. It’s split into three phases – short-, medium- and long-term. In the report, which we haven’t seen in full, there are benchmarks for each phase so that the progress can be meaningfully tracked.

– Mohammad bin Abdullah Al Gergawi, Minister of Cabinet Affairs and The Future, explained the timeline: “The short-term is the future we’re living today as part of the UAE Vision 2021 and the course of the next five years. The medium-term strategy will focus on planning for the period between 2021 and 2026; by then, led by the success of the short-term future planning, the government would be even more responsive and adaptable to future changes. The long-term strategy goes beyond 2026, and we will commence work now to both foresee and build the future of the nation.”

– A key part of the plan is to bolster the education and public school system in the UAE. Schools will focus on teaching subjects and lessons that will future-proof students (in universities too). You can read more about how they plan to improve schools here.

– The key sectors discussed in the plan are healthcare, education, social development and the environment.

– The plan will first set up a new operational model for the UAE government, it will then be all about building up the national capacity – creating the right people for the right jobs (and vice versa).

– The report will now be used to form the basis for government policymaking in the UAE, and there is a focus on building the competency of the UAE workforce in each area and developing specialised research and development labs to bolster these industries in the UAE. We can already see this with the Dubai Future Accelerators programme, which was launched in June. This involved 2,274 applicants from 73 countries submitting ideas and plans that will move the world into the next industrial revolution. The 30 groups have now, with the government of Dubai’s support, started incubating their forward-thinking ideas in Dubai (they’ll spend 12 weeks doing so). The Dubai government is committing Dhs1 billion to the project.

– Under this new strategy planning for the future will become a mandatory requirement for all government departments. Every government department will now have a Director of the UAE Strategy for the Future. The UAE Cabinet will also issue regular reports on future needs, trends and models.

– The strategy also looks out to the world – it has outlines in it about making the UAE a global destination for sustainability and the future. How? Through knowledge-exchange platforms to bring great minds to the UAE, and through strategic partnerships with future-focused people and organisations, including universities.