Here is Dubai Twitter’s reaction to the result, plus a look back on the discussion from the GCC during his campaign…

In a shocking result, Donald Trump is about to become the 45th President of the United States.

The man who praised Dubai’s airports but was incendiary about Islam has just given his acceptance speech. During it he promised to “double the growth” of the US, also saying that his nation “will get along with any nations willing to get along with us”. Remember, he doesn’t actually become President until next year.


So what does this mean for life in Dubai? Well we’ll bring you more on that soon, but for now here’s some of the reaction on Twitter from people talking about Dubai (or those living in Dubai): 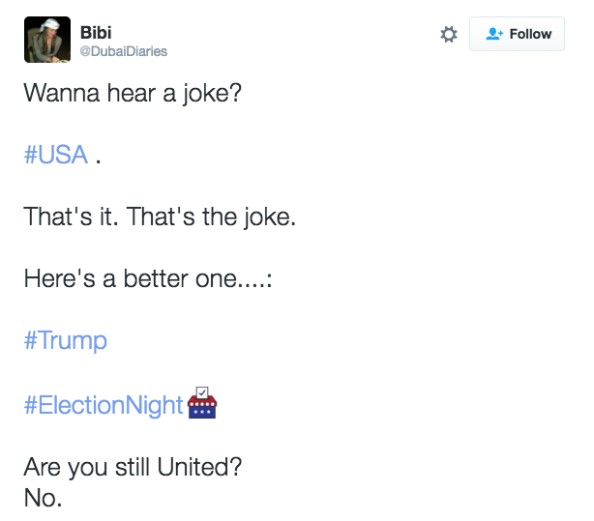 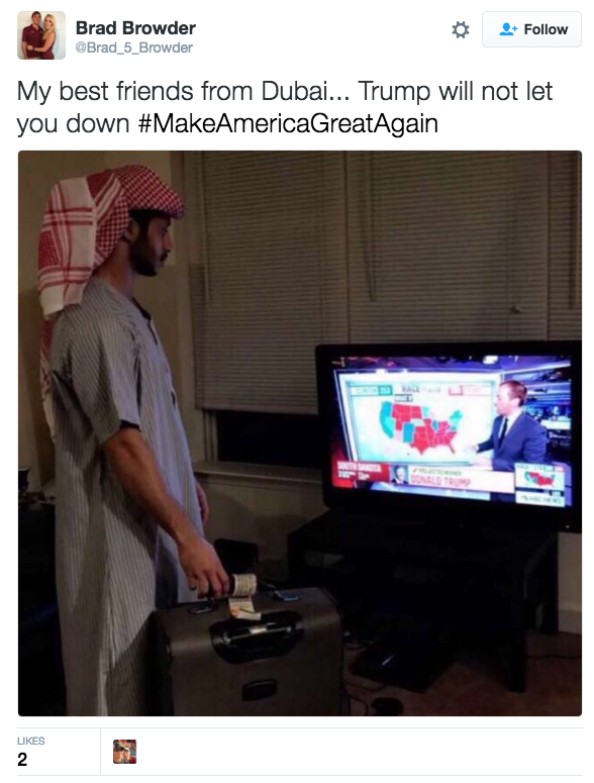 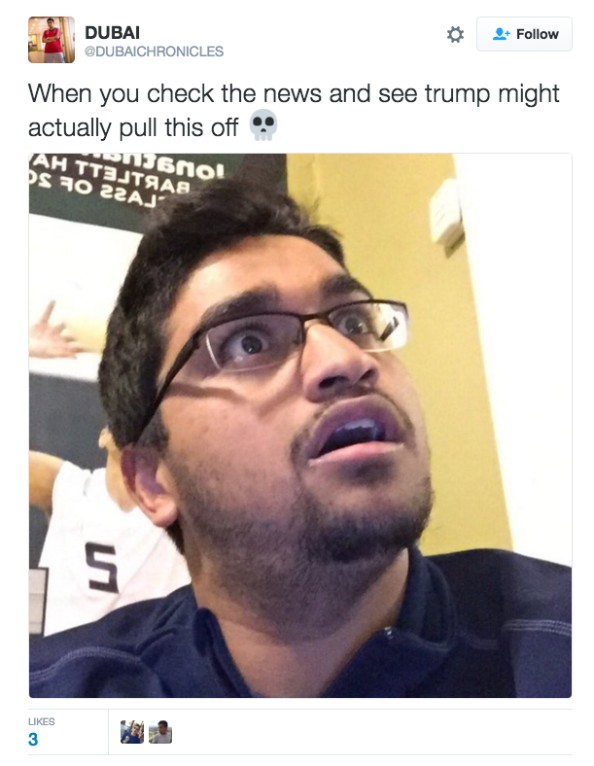 THE GCC ON TRUMP

Donald Trump at a press conference this month.

The prominent UAE businessman has provided words of support for Trump in the past, but it seems his closing borders stunt is a step too far.

Al Habtoor told CNN: “I view him as the biggest enemy of Islam. He is a man supporting ISIS… he is encouraging them, this is what they want to hear.”

The retail giant behind Splash, Centrepoint, Home Centre, Iconic, Emax and many other stores, has removed all Trump Home products from their 195 Lifestyle stores across the Middle East due to his anti-Islam statements. Read more about that here.

Lt. Gen. Dahi Khalfan Tamim, the deputy chairman of police and general security in Dubai, took to Twitter to warn that there would be a “clash of civilizations” if Trump won – which references political scientist Samuel P. Huntington’s theory that future wars in the world will be fought between religious and cultural divides rather than country lines.

Late last year he propagated what’s widely considered to be a myth about uninhabitable areas of Paris: “If you look at Paris [it’s] no longer the same city it was. They have sections in Paris which are radicalised where they police refuse to go there because they’re petrified. We have places in London and other places that are so radicalised the police are afraid for their own lives. We have to be very smart and very vigilant.”

The media statement began with: “Donald J. Trump is calling for a total and complete shutdown of Muslims entering the United States until our country’s representatives can figure out what is going on.”

After last week’s attacks in Brussels, Republican Presidential hopeful Donald Trump tweeted, “Incompetent Hillary, despite the horrible attack in Brussels today, wants borders to be weak and open-and let the Muslims flow in. No way!”

News
EDITOR’S PICKS
What’s On Nightlife Awards 2021: Here are the nominees...
READ MORE
It's back! What's On Lock In returns to Media One Hotel
READ MORE
Arts and culture: 5 spots we can't wait to visit at Expo 2020 Dubai
READ MORE
UAE petrol prices are set to decrease in September 2021
READ MORE
MOST POPULAR
Watch: Expo 2020's official song has been released and it's seriously catchy
A Shakespeare rom-com is gracing the stage at The Junction this weekend
Iris Dubai to open a huge pop-up at Expo 2020 Dubai
Work out with UK fitness trainer Courtney Black in Dubai this week
Exclusive reveal: Hola, an Ibiza-inspired rooftop bar in Dubai
YOU SHOULD CHECK OUT
Our website uses cookies and other similar technologies to improve our site and your online experience. By continuing to use our website you consent to cookies being used. Read our privacy policy here.