Donald Trump’s name disappears from a Damac development, but then goes up again a few days later. Details here…

On Thursday it was noted that Donald Trump’s name had been stripped from the frontage of the still-under-development Dhs22 billion Akoya by Damac project. The huge project on the outskirts of Dubai includes a Trump golf course.

These photos show the empty space, as well as what was left of Trump’s name in tatters on the ground outside the Damac development on Thursday:

The initial presumption was that it was taken down by the developers Damac, and that they had removed it due to the 69-year-old’s incendiary comments about Muslims entering America. He suggested, in the middle of his campaign to become the Republican Presidential candidate, that no muslims should be allowed entry into the US.

Despite the flurry of publicity and tweets, Damac refused to comment on the removal, and on Saturday Trump’s name had been put back up, meaning it looks like this again:

This suggests either that it wasn’t Damac that removed the Trump branding in the first place (could it have been vandalism?) or that contractual obligations mean the signage had to go back up.

The Trump International Golf Course will be in the middle of the 42 million square foot Akoya by Damac project in Dubailand, and it was announced in May 2013. Damac has a deal for two golf courses and a housing development with Trump’s name, and Niall McLoughlin, a senior vice president at Damac Properties, had this to say about it recently:

“We would like to stress that our agreement is with the Trump Organization as one of the premium golf course operators in the world and as such we would not comment further on Mr Trump’s personal or political agenda, nor comment on the internal American political debate scene.”

We’ll keep you updated with any further developments.

The location of the now-under-scrutiny project: 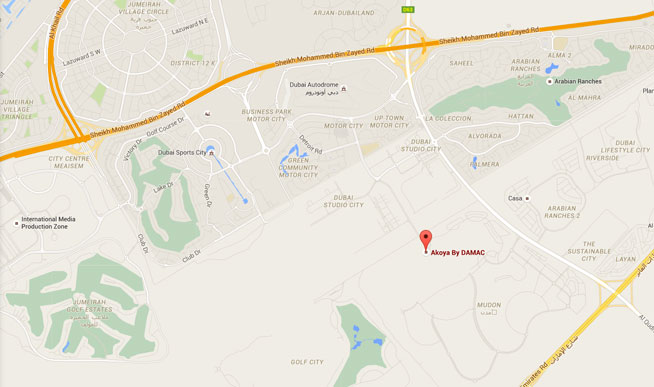 OTHER GCC REACTIONS TO TRUMP

The prominent UAE businessman has provided words of support for Trump in the past, but it seems his latest stunt is a step too far.

Al Habtoor told CNN: “I view him as the biggest enemy of Islam. He is a man supporting ISIS… he is encouraging them, this is what they want to hear.”

The retail giant behind Splash, Centrepoint, Home Centre, Iconic, Emax and many other stores, has removed all Trump Home products from their 195 Lifestyle stores across the Middle East. Read more about that here.

Donald Trump, who is currently running to be the Republican Presidential candidate, said on Tuesday via a statement that America should disallow any Muslims from entering the country.

The media statement began with:  ”Donald J. Trump is calling for a total and complete shutdown of Muslims entering the United States until our country’s representatives can figure out what is going on.”

However, a poll released on December 10 shows that 35 per cent of Republican primary voters support Trump, with Ted Cruz in second place at just 16 per cent.