Dubai history made: The Canal is open

Two weeks ago water was released into the Dubai Canal, then the waterfall along the highway starting flowing (you can read all about that here) and on Wednesday night the nine kilometre-long waterway was officially opened with a fireworks display along Sheikh Zayed Road (yes, that’s why the road was closed).

The boardwalk and two of the pedestrian overbridges from Business Bay to Jumeirah are now open. Want to visit? Drive towards the W Hotel and there’s RTA parking right there. In fact, there are now 1,602 RTA parking spots along the Canal. 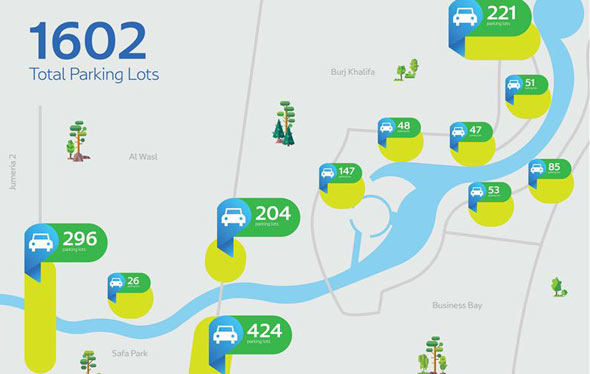 Putting together the final touches to reveal for you today #The_New_Face_Of_Dubai#HappeningNow pic.twitter.com/xCWEcLH5Bp

Here is H.H. Sheikh Mohammed bin Rashid Al Maktoum, ruler of Dubai and Vice President of the UAE, on one of the new pedestrian overbridges: 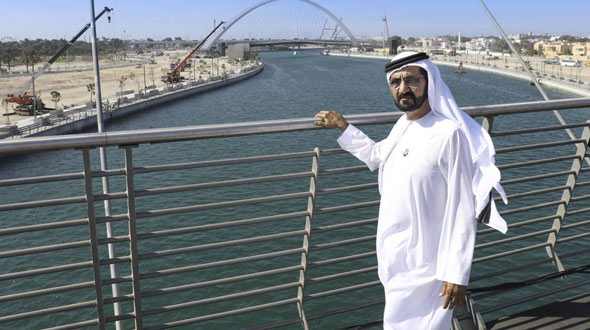 This image shows how the waterfall cascading off of the Dubai Canal bridge (that is motion controlled so will turn off when boats float past) lights up at night: 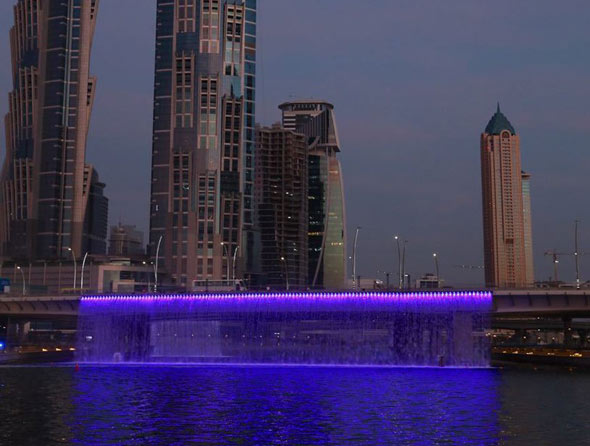 This video shows how the Canal was a vision born a long time ago, during the rule of Sheikh Rashid bin Saeed Al Maktoum:

And this photo shows Sheikh Rashid’s son, Sheikh Mohammed, at the opening of the new landmark:

While we don’t yet know what parts of the walkway around the Canal will be open yet, we’ll let you know as soon as we know. What we do know is that the nine new marine transport stations in the waterway are now open (you can read all about the locations of those here). In fact, dignitaries were already out on the new ferry on Wednesday night.

Also, this week the first image of the full canal from space was released by the DubaiSat-2, which is owned and operated by the Mohammed Bin Rashid Space Centre.

Here’s an image of the Canal before the water started flowing in mid-October: 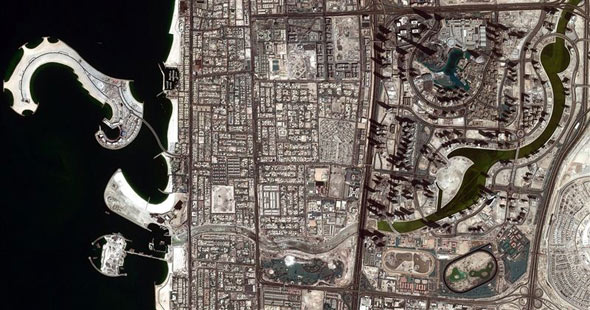 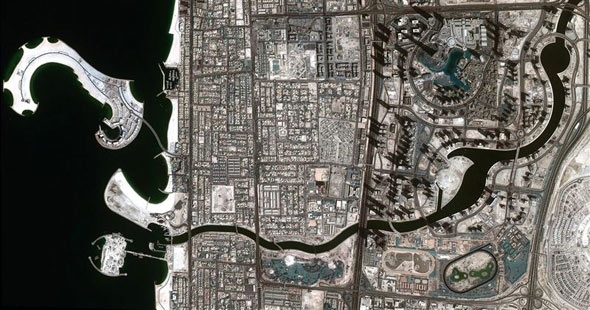 The latest photo also shows just how much Jumeirah’s beach and shoreline has extended as part of the project.

It gives you an overview of the location of the new bridges to cross the canal and how much of the city has been built to sit snugly along the water’s edge (an indication perhaps that the canal was in the works long before we all knew about it).

Here’s a video from the opening:

Here’s a photo from Dubai Media Office that shows the water running from Sheikh Zayed Road, past Safa Park, all the way to the beach in Jumeirah: 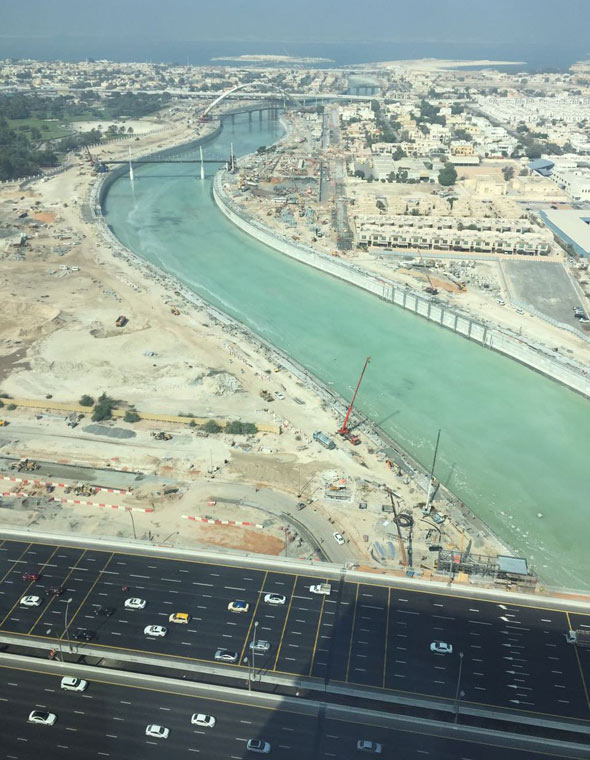 Here’s a video that shows the Canal from the W Hotel in Al Habtoor City:

The 3.2 kilometre canal links Business Bay with the Arabian Gulf, and has turned areas of Dubai like Satwa, Downtown, Zabeel, Oud Metha, Karama and Bur Dubai into one huge island (as they are now completely waterlocked).

This Google Maps image shows the entire area that is now an island (if you consider that the blue lagoon from Ras Al Khor now runs all the way to the beach): 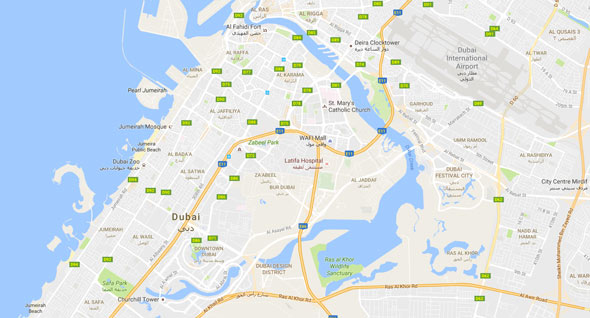 Here’s what it will look like from above when completely finished (including the extension to Jumeirah Beach):

When the entire project is finished we’ll get a new Jumeirah Beach Park, a mall with a park on top of it, a 7km running track and apartments that look over Safa Park.

This month all of the major roads and pedestrian bridges will open along the Canal (however it will then take a while for the residences, restaurants and hotels etc to be built and opened).

In fact, both of the bridges over Sheikh Zayed Road are complete and open, both the the Al Wasl Road and Jumeirah Beach Road bridges are finished, and the pedestrian bridges over the canal near Safa Park look to be almost finished.

WHAT DUBAI CANAL WILL ADD TO THE CITY…

There will be three pedestrian bridges that will run along the three-kilometre-long Dubai Water Canal, there will also be running tracks, sitting areas looking over the water, smart lighting (that can be controlled by an app) and lots of greenery.

‘The Walk’ at Dubai Water Canal will connect with the current Jumeirah Beach running track, meaning a 7km-long continuous track for joggers.

The area will also be very safe, due to smart surveillance cameras focused on pedestrians with face-recognition technology.

So will we be able to live, stay and shop along the canal? Of course! Property developments will run along both banks of the canal – with 5,345 residential units planned, as well as 948 hotel rooms. The areas will be called Gate Towers, Jumeirah and Peninsula.

There will be four residential towers linked with Safa Park, as well as 211 residential units right on the water.

The Gate Towers mall is seen in the centre of this photo.

In other good news, Jumeirah Beach Park will reopen, and the stretch of beach on the much-loved, currently-closed park will extend by one kilometre as it will run out over the Canal’s peninsula. The peninsula area will also feature 60 marinas, 1,817 residential units, 957 five star hotel rooms and 347 retails outlets and restaurants.

The Gate Towers bridge at the entrance of the canal to the Arabian Gulf will feature a three-level mall that will be built above the Canal and span 300,000 square metres. The mall will hold 434 retail outlets and restaurants.

The coolest bit? The roof of the mall will be a park – yes, as in greenery, and it will look out over Safa Park.

The huge project was split into three contracts by the RTA:

1) Phase one was made up of the Dhs580 million development of eight lanes of bridge in each direction on Sheikh Zayed Road, and the course for the Canal that will flow under Sheikh Zayed Road. This has been completed.

2) The second phase was the Dhs384 million construction of bridges on Al Wasl Road and Jumeirah Beach Road that will allow yachts of up to 8.5 metres in height to navigate the canal along these roads. It will also include a multi-tier interchange to link traffic movement between Al Wasl, Al Hadiqa and Al Athar Roads.

3) The final phase is the largest – at Dhs802 million – and involves the digging of the Water Canal, and building the sides of the Canal that will link Dubai Creek with the Arabian Gulf from Sheikh Zayed Road, through Al Safa Park and Jumeirah 1. This phase is still active but is almost complete, and it also includes the construction of three pedestrian bridges, four marine transit stations, and a manmade peninsula along Jumeirah Park.

#RTA is set to complete the opening of the entire Jumeirah Bridge this July as part of Phase II of the Dubai Water Canal project. The Bridge comprises three lanes in each direction and rises 8.5 meters above the Canal, thus enabling free navigation around-the-clock.
RTA will open lanes of this bridge in phases. RTA has opened today two lanes inbound from Jumeirah 3 (south) outbound to Jumeirah 2 (north), while two lanes coming from Jumeirah 2 (north) heading towards Jumeirah 3 (South) will be opened on Friday (July 15th) and all lanes will be in full operation in both directions starting from July 21st. HE Mattar Al Tayer said that by opening the Jumeirah Bridge, RTA has finally accomplished all works in bridges crossing the Dubai Water Canal. Works would now focus on digging a sector of the Canal underneath the bridges, and constructing three footbridges linking the two shores of the Canal, and building 10 marine transport stations. #RTA #dubaicanal #dubaiwatercanal #dxb #mydubai #قناة_دبي_المائية #دبي #canal #summer #construction #هيئة_الطرق_والمواصلات #water_canal #جميرا #dubai #waterfront #jumeirah

News
EDITOR’S PICKS
Here's the full list of UAE public holidays in 2023
READ MORE
23 incredible things to look forward to in the UAE in 2023
READ MORE
Hidden gems: 10 UAE desert pop-ups to discover this winter
READ MORE
Where to travel in 2023: 10 new flight routes from the UAE
READ MORE
MOST POPULAR
Ras Al Khaimah Fine Arts Festival returns this weekend
The best new bars in Dubai
15 Dubai pool and beach passes that are all fully redeemable
Try something new: 21 brilliant new things to do in Dubai
Dr Who, C3PO, Andy Serkis and more celebs confirmed for Comic Con
YOU SHOULD CHECK OUT
Our website uses cookies and other similar technologies to improve our site and your online experience. By continuing to use our website you consent to cookies being used. Read our privacy policy here.