The Dubai Canal opens this month! And with that comes the opening of new water stations – so you’ll soon be able to hop on a ferry from Business Bay to Dubai Marina.

Remember how we told you that more of us will be travelling by water by 2020? Well it will be happening even sooner, with nine new water ferry and taxi stations opening on Dubai Canal the day after the waterway officially opens this month. 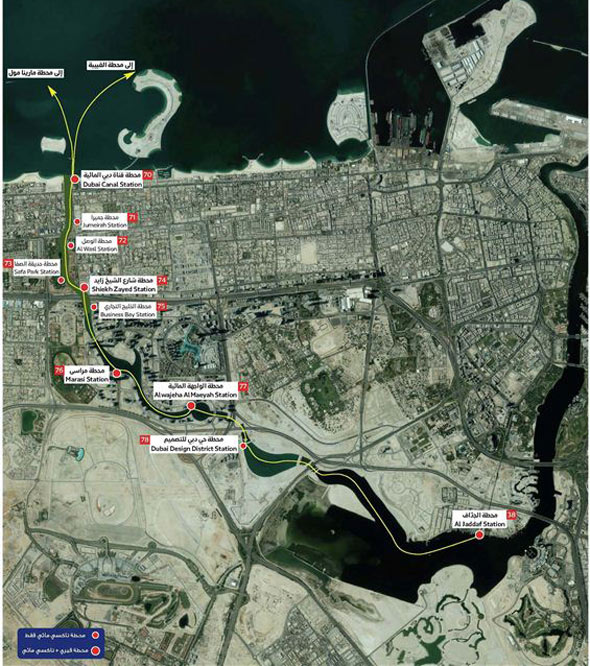 The marine transport service will see nine new stations. Five of those will be along the Canal, with those stations called Sheikh Zayed Road, Safa Park, Al Wasl, Jumeirah and Dubai Canal. Then four of the new stations will be along Business Bay: with these stations called Dubai Design District, Al Wajeha, Al Maeyah, Marasi and Business Bay. The opening of these will raise the number of marine transport stations in the UAE to 42.

“The service will be available on demand… from 10 am to 10 pm in all new stations,” explained H.E. Mattar Al Tayer, the Chairman of the RTA.

“There will be three newly scheduled two-way daily services for the Dubai Ferry from Al Jaddaf Station calling at Dubai Design District, Al Wajeha Al Maeyah, and Marasi stations in the Business Bay; and the Sheikh Zayed Road and the Dubai Canal stations in the Dubai Water Canal. The services will start at 10 am, 12 midday and 05:30 pm. The current line of the Dubai Ferry shuttling between Al Ghubaiba Station and Marina Mall Station will be modified to call at the Dubai Canal Station. Thus, the Dubai Canal Station will link between Al Ghubaiba, Marina Mall, Business Bay and Al Jaddaf. Due attention has been given to the integration of other transit modes (buses, trains and taxis) in order to provide a smooth and safe service for commuters,” he explained.

What else is new?

They have also recently opened the Al Jaddaf marine station, and rolled out the air-conditioned ‘traditional’ abra to take you around the area near Festival City and Ras Al Khor.

News
Transport
Travel
EDITOR’S PICKS
So, when is the next UAE public holiday in 2021?
READ MORE
All of the lavish new hotels set to open in Dubai in 2021
READ MORE
16 of the best pool passes in Dubai that are fully redeemable
READ MORE
All of the restaurants at West Beach, Palm Jumeirah
READ MORE
MOST POPULAR
NCEMA: Additional supportive dose of Sinopharm is now available
UAE should be off UK red list 'very soon' says chairman of Emirates
Abu Dhabi gets a restaurant dedicated to the love of Udon
Flash sale: 50 percent off staycations at this luxe Palm Jumeirah hotel
How you can help the EAD protect Al Wathba Fossil Dunes
YOU SHOULD CHECK OUT
Our website uses cookies and other similar technologies to improve our site and your online experience. By continuing to use our website you consent to cookies being used. Read our privacy policy here.