What’s On has a full list of all the things to do for the weekend in Abu Dhabi, including workshops, deals, sports, entertainment and new openings 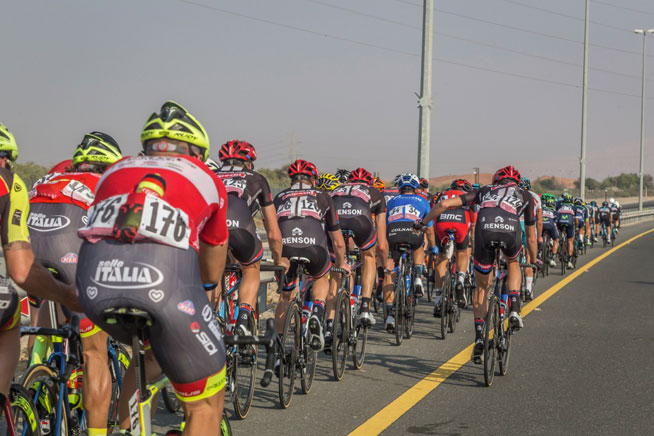 The Abu Dhabi Tour will see pro cyclists race 672km in this four-day stage race. Today they are in the Western Region, heading towards Liwa and Qasr Al Sarab, tomorrow they are riding through the city of Abu Dhabi, Saturday they head to Al Ain and finish up Jebel Hafeet, Sunday the Tour concludes at Yas Marina Circuit. Riders taking part include British sprinter Mark Cavendish, Italian Olympian Elia Viviani, German Marcel Kittel (winner of the 2017 Dubai Tour last month) and Alberto Contador – the climber who has won all three of the sports Grand Tours in France, Italy and Spain. Click here for your guide to all the road closures taking place as a result in the emirate this weekend.
Various locations including Yas Marina Circuit, Yas Island, Abu Dhabi. Tel: (800) 555. Taxi: Yas Marina Circuit. abudhabitour.com 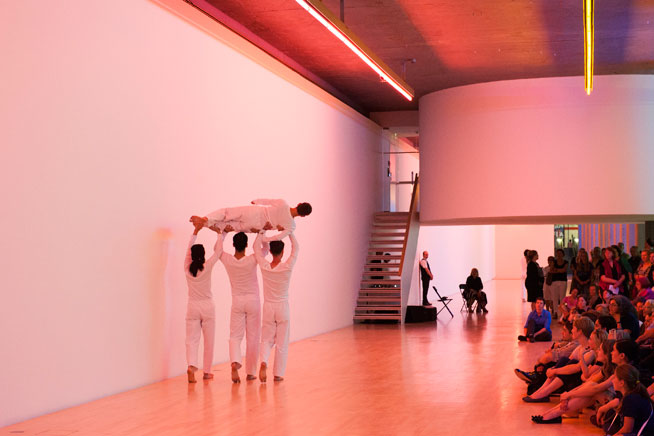 This weekend, you can watch people dance on a roof. New York University Abu Dhabi will be hosting a performance that will see dancers present a selection of works from acclaimed American choreographer Trisha Brown. Trisha Brown: In Plain Site features six or seven dancers from New York performing a series of movements from the postmodernist choreographer in unexpected spaces throughout the campus, including at the Black Box theatre, west plaza, rooftops and even high-line bridges. Audience members should wear their walking shoes, as you’ll be on your feet too, following the company on their journey. The performance will last anywhere from 75 to 90 minutes and will be followed by a question and answer session with the artists.
NYUAD Arts Center, Saadiyat Island, Abu Dhabi, Fri and Sat 11am and 4pm, free but prior registration is required. Taxi: NYUAD

Brunch at the Marriott and save on a stay
When you book brunch for two at the Marriott’s property in Al Wahda, you’ll receive a complimentary room with promo code YX1. Valid on February 24 only.
Marriott Hotel Downtown, Al Wahda, Abu Dhabi, Dhs380. Tel: (02) 3047777. Taxi: Marriott Downtown. marriott.com

Try barefoot skiing
Yep, you read that right. Ditch the board and go waterskiing with your two feet instead. Barefooting, as it’s known, first started in 1947 in the United States and is gaining ground right here in Abu Dhabi. Halla Walla hosts barefooting lessons at the Al Bandar Marina that will teach you how to hold your own against the current using two different techniques (boom or board). The company also hosts barefoot clinics where three to five people can learn about the sport together.
Halla Walla, Al Raha, Abu Dhabi, Dhs145. Tel: (054) 4995770. Taxi: Al Bandar Marina, Al Raha. hallawalla.ae 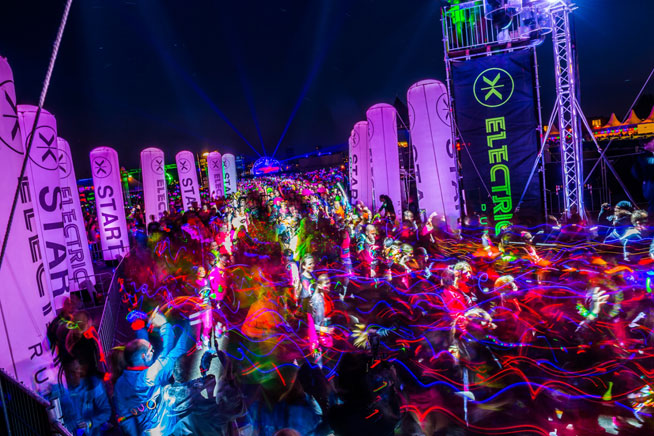 Unwind with some bamboo
Hold the front page – bamboo isn’t just for pandas. The spa at the Eastern Mangroves Hotel & Spa By Anantara has launched a new 90-minute treatment that uses heated bamboo sticks to help you relax. The Scents Of Arabia signature ritual begins with a 15-minute steam before a full body Arabesque massage using either rose and sandalwood or amber and musk argan oil blends. After the massage, any lingering tension is attended to with a three-mint herbal compress and heated bamboo stick.
Eastern Mangroves Hotel & Spa By Anantara, Eastern Ring Road, Abu Dhabi, daily 10am to 11pm, Dhs779. Tel: (02) 6561000. Taxi: Eastern Mangroves. abu-dhabi.anantara.com

Have a go at ziplining 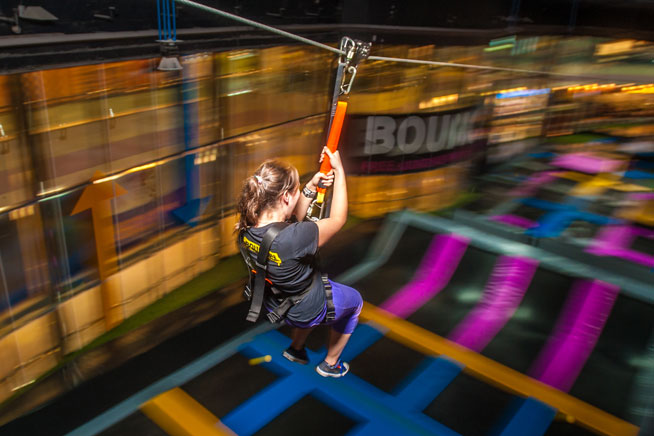 Not just for trampoline fanatics, Bounce Abu Dhabi in Marina Mall also has a 40-metre long zipline if you’re after some serious air. Best of all, you can get strapped into a dorsal harness that will see you zip across the space head-first, Superman style. Once you’ve reached the other side there’s an 18-metre quick drop, if you’re so inclined. Note the weight limit for both the zipline and drop is 120kg.
Marina Mall, Ras Al Akhdar, Abu Dhabi, Dhs80 admission, Dhs30 zipline. Tel: (04) 3211400. Taxi: Marina Mall. bounce.ae

New sushi menu at Cho Gao
You can now get a plateful of sushi at pan-Asian restaurant Cho Gao. The new Taste Of Japan menu features a selection of salads as well as sashimi and nigiri options. There are ten types of rolls including California and spicy tuna, as well as crispy crust maki and unagi (or eel and crabstick). The restaurant is also expected to open a dedicated sushi bar space in the venue at the end of the month.
Crowne Plaza Hotel, Hamdan Street, Abu Dhabi, daily noon to 1am. Tel: (02) 6166149. Taxi: Crowne Plaza Hotel. facebook.com/chogaoasianexperience

Learn how to Lindy Hop at free dance lessons
So you think you can dance? Check out some new swing dance lessons at New York University Abu Dhabi, being hosted by local club Swing Dance Abu Dhabi. The classes will focus on teaching the Lindy Hop, a type of dance that first appeared in the United States in the ’20s and ’30s. Dancers can expect a fun, active style of dance that includes throws, jumps and hops. “It’s a fun way to destress,” says instructor Esteban Salvemini. “It’s a really welcoming environment and great exercise, as you are moving the entire time.” The group will be hosting free one-hour lessons at the university campus every Saturday at 7pm, with a two-hour dance social afterwards for guests who would like to continue to practise their moves.
New York University Abu Dhabi campus centre, Saadiyat Island, Abu Dhabi, Sat 7pm to 10pm, free. Tel: (02) 6285511. Taxi: C2 building, NYUAD. facebook.com/SwingDanceAbuDhabi

Art
Bars
Beauty
Brunch
Culture
Eat & Drink
Indoor
News
Outdoor
Restaurants
Sport & Fitness
Staycations
Summer Deals
Theatre
Things to do
Well-being
Workouts
EDITOR’S PICKS
Bla Bla: Dubai's huge new beach club is set to open this Thursday
READ MORE
16 of the best beach bars in Dubai for sundowners
READ MORE
Watch: A look inside Conor McGregor's Dhs20,000 per night Dubai villa
READ MORE
Where to get the Covid-19 vaccine in Dubai, Abu Dhabi and across the UAE
READ MORE
MOST POPULAR
Need a few laughs? These comedians are coming to Dubai in February
Is David Guetta going to perform in Dubai? It looks like it...
Amazonico Dubai launches new brunch and rooftop after-party
A stunning bright pink lake has been discovered in the UAE
Review: Goldfish Sushi & Yakitori, Dubai
YOU SHOULD CHECK OUT
Our website uses cookies and other similar technologies to improve our site and your online experience. By continuing to use our website you consent to cookies being used. Read our privacy policy here.