Sir Tim Clark hopes to put an end to the electronics ban by convincing the US government that Dubai’s aviation security systems are up to the task.

The laptop ban on flights from the UAE to the US has been in place for over a month now, but the president of Emirates is hopeful there will soon be a resolution.

In a recent interview with Dubai Eye’s Business Breakfast show, Sir Tim Clark responded to popular claims that the Trump administration’s electronics ban was more of a protectionist scheme than a security measure.

“I’ve said quite publicly I don’t believe that to be the case,” Clark said.

“I believe the US detected a clear and present threat, and that they needed to deal with that in a fairly draconian matter and that of course is what happened.” 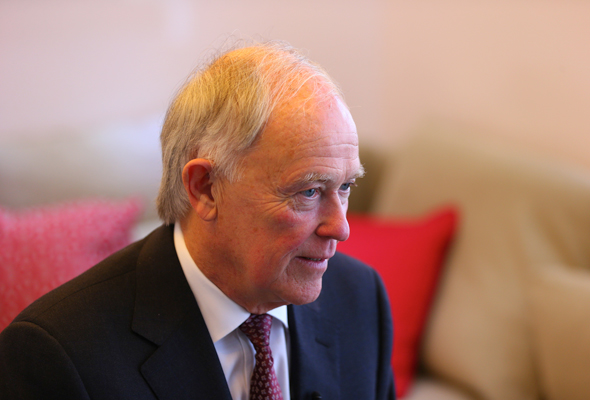 READ MORE:
The UK is now banning laptops as hand luggage too…
Video: Here’s how Emirates is getting around the electronics ban…

Clark said aviation security in Dubai and the UAE was rated very highly around the world.

He added: “It could be that if we can persuade the US government that we can do a very good job in preventing all these things happening, that we will get back to some normality, then restore the way things were where people can carry laptops in the aircraft cabins with them.”

ON CUTTING FLIGHTS TO THE US

Clark also spoke of Emirates’ decision to scale back its regular flights to the US.

But Clark said the flight cuts would not be permanent.

“I’m forever an optimist. I think we will get a resolution to all of this – that demand will be restored, and sooner rather than later we will put back the capacity that we’ve taken out on this temporary basis.”

ON COMPETITION WITH US AIRLINES

Last week, the Partnership for Open and Fair Skies – a lobby group that includes United Airlines, American Airlines and Delta Air Lines – said it was “laughable” that Emirates would call itself a profit-oriented airline.

Clark retorted by insisting Emirates does not receive any subsidies from the government, and that US carriers have spent years trying to “take us down”.

“It is clear they would rather see Emirates not on the planet at all. They use every trick in the book.”

Clark said the statement came at a time when airlines were not putting the customer at the heart of the business, referring to the now-infamous United Airlines incident.

“The incident that we all witnessed which went viral globally not so long ago is symptomatic of companies where the corporate culture is clearly misaligned with what they should be doing, which is carrying people from A to B in an affordable manner and treating people as they would be treated themselves,” he said.

“For them to start saying it’s ‘laughable’ that we are concerned about profit… actually, they’ve got a far greater problem than we have.”

Transport
Travel
EDITOR’S PICKS
Ain Dubai will open with fireworks, live music and a drone show
READ MORE
Incredible Aura SkyPool to open in Palm Tower this November
READ MORE
Brit Grand Slam hero Emma Raducanu confirmed for Mubadala Tennis
READ MORE
What’s On Nightlife Awards 2021: Here are the nominees...
READ MORE
MOST POPULAR
Why Armani/Hashi is trending hard on the Japanese cuisine scene
Celebrate creativity at City Walk during this three-weekend event
This Heinz Beck brunch at Waldorf Astoria just got an upgrade
10 brilliant things to do in Abu Dhabi this long weekend: Oct 21 to 23
Experience Arabesque elegance at Asil's Saturday lunch
YOU SHOULD CHECK OUT
Our website uses cookies and other similar technologies to improve our site and your online experience. By continuing to use our website you consent to cookies being used. Read our privacy policy here.