Emirates gets sassy towards United Airlines & it's kind of amazing

He went on to quip about Emirates, Etihad and Qatar flights that have only “20 or 30 people” onboard. (We don’t know what planes he’s been on, and we wish that was the case on long hauls, but we’ve certainly never seen it.)

Well, this week Munoz has had a PR disaster – with this video of a man being forcibly removed from his United airlines flight after it had been overbooked going truly viral yesterday.

The man in the video was seen with a bloodied face from the removal:

Emirates Airline has responded, starting with Munoz’s quote about them not being a “real” airline, and then pointing out that Emirates was voted “best airline” according to Trip Advisor this week.

The best zing however comes when they use United’s very own slogan – “fly the friendly skies”, but Emirates adds “this time for real”:

EMIRATES’ RESPONSE TO THE ELECTRONICS BAN

“Who needs tablets and laptops, anyway?”

As of March 25, you can’t pack your laptops, tablets, cameras, electronic game devices, e-readers or portable DVD players into carry-on luggage when travelling from Dubai or Abu Dhabi to the US.

In a move that baffled many security experts, the Trump administration banned US-bound passengers in eight Muslim-majority countries – including the UAE – from bringing large electronic devices into plane cabins, citing terrorist concerns.

ALSO: Here’s how Emirates is getting around the electronics ban hassle…

The UK followed suit, announcing a ban on large electronic devices on flights from six Muslim-majority nations – though the UAE is not included.

Some have argued the reason behind the ban is more to do with stifling increasing competition from Middle Eastern airlines than national security issues.

The ban especially inconveniences frequent flyers in the region, who will have no choice but to check a bag if they’re travelling with one of the banned devices (and will have to endure long flights without access to their laptops or tablets).

But Dubai-based airline Emirates was quick to snap up a clever marketing opportunity, posting a video to all of its social media accounts which begins with the words: “Who needs tablets and laptops anyway?”

Let us entertain you.

The video rehashes an old advert starring Jennifer Aniston, showing the actress enjoying the entertainment system in economy class, before ending with the text: “Let us entertain you.”

While business travellers may not be able to see the funny side, the video was well-received, seeing more than 200,000 views and 2,500 shares in the first 12 hours it was online.

If you’re flying from the Middle East to the US soon and are worried about how you’re going to keep yourself busy, we have a few ideas…

1. Play the ‘count the falcons’ game

This one only works if you’re travelling in business class or first class. How many can you spot in the cabin? Way more fun than counting sheep… 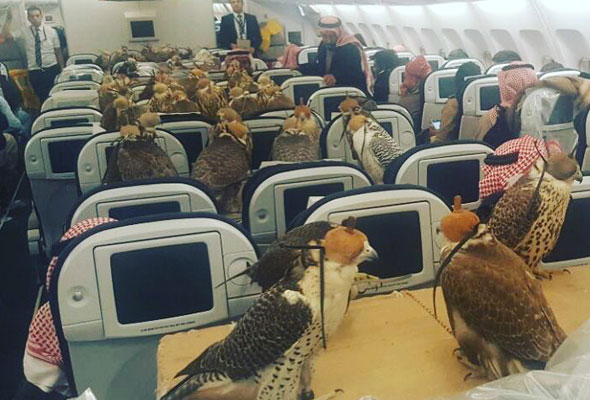 Pack a dictionary (a hard copy one, obviously) and attempt to translate every single Arabic flight announcement. You’ll be fluent in no time.

3. Memorise every US state, in alphabetical order

It’s a skill that might come in handy, if you ever end up being questioned by TSA…

News
Travel
EDITOR’S PICKS
Ain Dubai will open with fireworks, live music and a drone show
READ MORE
Incredible Aura SkyPool to open in Palm Tower this November
READ MORE
Brit Grand Slam hero Emma Raducanu confirmed for Mubadala Tennis
READ MORE
What’s On Nightlife Awards 2021: Here are the nominees...
READ MORE
MOST POPULAR
Nancy Ajram and Ragheb Alama are performing at Expo 2020 Dubai in November
Miami Beach-inspired luxury resort Th8 Palm is opening in November
Watch your next film under the stars as outdoor cinemas return to Dubai
This new ladies' night offers a free open bar every Tuesday
This Sicilian rooftop party brings Godfather glamour to Dubai
YOU SHOULD CHECK OUT
Our website uses cookies and other similar technologies to improve our site and your online experience. By continuing to use our website you consent to cookies being used. Read our privacy policy here.