Solo bike rides through the desert just got safer.

For some, the idea of heading out into the desert for a solo bike ride may sound like the start of an extreme survival movie (or possibly even a horror film – who knows what those oryx are capable of?) – but a new initiative could help to quell those fears.

The Roads and Transport Authority (RTA) has installed 30 solar-powered “SOS” phones along the Al Qudra cycling track in the Seih Al Salam desert, a popular destination among Dubai’s adventure seekers.

The phones allow cyclists to make emergency calls to ambulance services or police, should they get into trouble on the track. Here’s what to look out for (the letters “SOS” and the picture of a phone are a bit of a helpful hint): 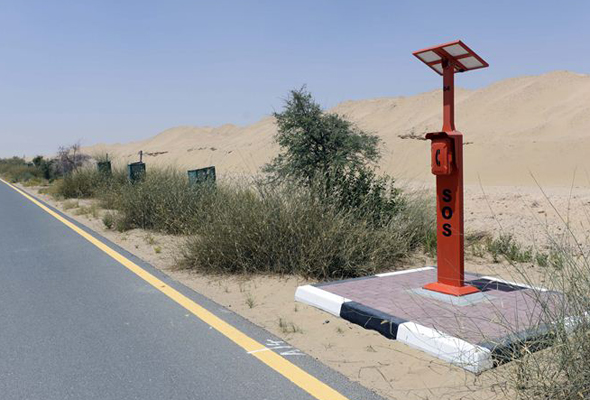 According to the RTA, the devices are able to operate efficiently in all kinds of weather conditions, at temperatures ranging from 0 to 70 degrees Celsius.

The RTA team has already made some trial phone calls in co-operation with Dubai Police to check the phones were working properly… so go forth and pedal, safe in the knowledge that even if an oryx steals your cellphone, you’ll still be able to make contact with the outside world.

News
Sport & Fitness
EDITOR’S PICKS
Covid-19 rules in Dubai: all the updates you need to be aware of
READ MORE
9 royal-approved Dubai restaurants
READ MORE
16 of the best beach bars in Dubai for sundowners
READ MORE
Where to get the Covid-19 vaccine in Dubai, Abu Dhabi and across the UAE
READ MORE
MOST POPULAR
Department of Health approves three new rapid Covid-19 tests
Save up to 90 per cent at malls in Dubai this weekend
Atlantis, The Palm relaunches underwater yoga classes
6 fun things to do in Abu Dhabi this week: January 24 to 27
Platinum Heritage launches unique camping experiences in Dubai
YOU SHOULD CHECK OUT
Our website uses cookies and other similar technologies to improve our site and your online experience. By continuing to use our website you consent to cookies being used. Read our privacy policy here.