You can now catch an eco-friendly bus in Dubai

Not only is the new bus environmentally friendly, it’s bigger too.

Dubai’s Roads and Transport Authority (RTA) has started the test run of a brand new eco-friendly bus – the first in its fleet to be compatible with the European emissions standards. Such buses are characterized by their light weight and low fuel consumption.

The trial, which will run for six months, will assess economic feasibility, environmental benefits, reduction in carbon emission rate, engine efficiency, and maintenance, among other elements. 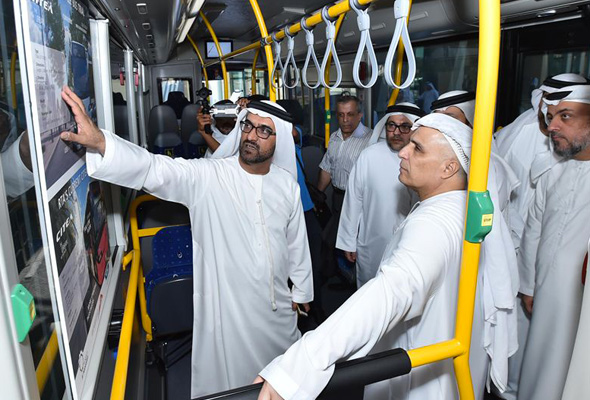 ALSO READ:
5 innovations you may not know are happening in Dubai right now
Dubai aims to be the most sustainable city in the world by 2050

“The trial operation of the new VDL Bus signals RTA’s keenness to revamp its public bus fleet to keep pace with the top practices worldwide and offer top of the range services to public transport riders in Dubai,” said the RTA’s Mattar Al Tayer.

Not only does the bus have a new and improved fuel efficiency, ranging from 10% to 15%, it also has a lower carbon emission rate. This brings the carbon footprint of the new bus to the bare minimum, in line with the top European standards.

It is also considerably lighter than the old model, and it’s bigger too. There are seats for 45 passengers, which is somewhat higher than the current buses seating capacity of 34 (which should mean a more comfortable ride!).

This move is in line with the national initiative launched in 2012 by HH Sheikh Mohammed bin Rashid Al Maktoum, vice president and prime minister of the UAE and ruler of Dubai, calling for a greener economy in the UAE.

News
Transport
EDITOR’S PICKS
Ain Dubai will open with fireworks, live music and a drone show
READ MORE
Incredible Aura SkyPool to open in Palm Tower this November
READ MORE
Brit Grand Slam hero Emma Raducanu confirmed for Mubadala Tennis
READ MORE
What’s On Nightlife Awards 2021: Here are the nominees...
READ MORE
MOST POPULAR
Free parking announced in Dubai on Thursday, October 21
Atlantis the Palm's Culinary Month is back with some amazing restaurants
7 fun spots to celebrate Halloween in Dubai with the family
The best places to watch the spectacular Ain Dubai fireworks show
This brunch serves up delicious Arabic dishes and non-stop captivating entertainment
YOU SHOULD CHECK OUT
Our website uses cookies and other similar technologies to improve our site and your online experience. By continuing to use our website you consent to cookies being used. Read our privacy policy here.