The free bilingual app aims to enrich the knowledge of the RTA’s commuters.

Long commute to work? There might just be a new boredom-busting solution.

Dubai’s Roads and Transport Authority (RTA) has announced the launch of a new app called ‘Read with RTA’.

The free app, which will be available for both IOS and Android, will provide 150 books in both Arabic and English for commuters to download and read throughout their journey.

#RTA has launched “Read with RTA” app to match the national agenda of reading endorsed by the UAE for the next ten years. pic.twitter.com/LhL2CxGvq7

ALSO READ:
Three new cycling tracks in Dubai to be completed by November
This app is designed specifically to help UAE labourers to get ahead

‘Read with RTA’ is the latest in a series of reading initiatives rolled out by the RTA. The initiative aims to creates avenues to help the city to fall in love with reading again.

Public transport libraries with an extensive selection of books have already been implemented at some Metro stations. You can access the libraries, borrow books and return them easily when you make your metro trips. 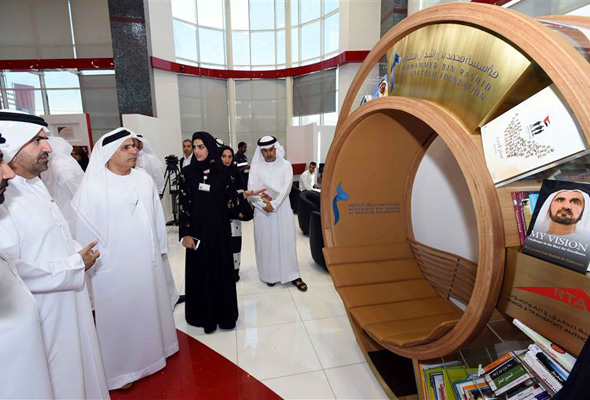 ‘Knowledge chairs’, as shown above, come complete with a built-in bookshelf and are now accessible across the city. The RTA owns five chairs, two chairs at Rashidiya and Abu Hail Bus Stations, two chairs at customers’ service centers at Umm Al Romool and Al Barsha, and one chair at the premises of Public Transport Agency, Muhaisna.

Users will be able to download ‘Read with RTA’ from the app store, or access it through the QR code displayed on stickers at metro & tram stations, buses & taxis.