Three new cycling tracks in Dubai to be completed by November

32km cycling tracks in Mirdiff, Mushrif and Al Khawaneej will open this year

Three new running and cycling tracks in Mirdiff, Mushrif and Al Khawaneej are at 90% completion according to the Roads and Transports Authority (RTA).

The 32km, Dhs67million project is expected to be completed as early as November this year.

The cycling tracks extend 32km within Mushrif, Midriff and Al Khawaneej. The construction also includes two bridges for both cyclists & pedestrians on Al Khawaneej and the Academic City Streets. 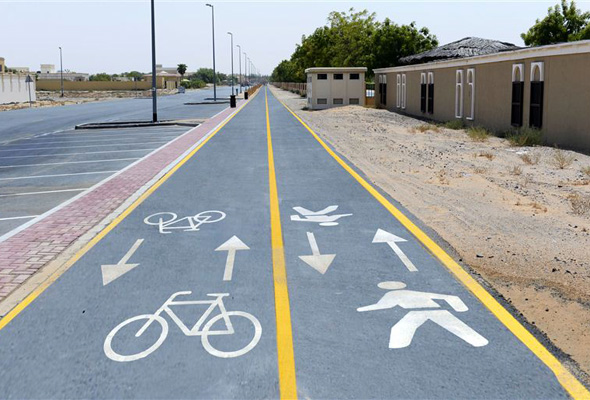 “The selection of these areas was based on several criteria highlighted by the population density, appeal to cyclists & pedestrians, suitability of locations and the traffic safety level,” explained director general of the RTA, Mattar Al Tayer.

The new tracks are part of a a larger, master plan developed by the RTA.

This will bring the total length of cycling lanes in Dubai to around 500 km by 2021.

News
Sport & Fitness
EDITOR’S PICKS
Here's the full list of UAE public holidays in 2023
READ MORE
23 incredible things to look forward to in the UAE in 2023
READ MORE
Hidden gems: 10 UAE desert pop-ups to discover this winter
READ MORE
Where to travel in 2023: 10 new flight routes from the UAE
READ MORE
MOST POPULAR
The Wizarding World officially comes to Dubai
11 homegrown UAE restaurants that have gone global
13 new brunches in Dubai that will spice up your February
You can now tour these 12 ladies' nights on Yas Island
Sweep your special someone off their feet at TH8 Palm Jumeirah
YOU SHOULD CHECK OUT
Our website uses cookies and other similar technologies to improve our site and your online experience. By continuing to use our website you consent to cookies being used. Read our privacy policy here.