Dubai to get the Middle East's first purpose-built eSports stadium

Plans have been revealed for a brand new sports stadium in Dubai – but you won’t be able to watch football or basketball here. This stadium will be dedicated solely to eSports.

What does “eSports” mean? It’s shorthand for competitive video gaming, and it’s a billion dollar industry that packs out arenas all over the world. Fans flock to see their favourite “athletes” (professional video gamers) battle it out, with all the action beamed onto big screens. There’s even been talk of making it an official Olympic sport.

And now it’s coming to Dubai, with Dubai Media Office and TECOM Group announcing Dubai X-Stadium – which will be the region’s first dedicated eSports stadium, and is set to establish Dubai as a regional and global hub for hosting video game events.

ALSO READ:
This racing video game has a Dubai-based track and it looks awesome
Dubai’s gamers are in the midst of beating a Guinness World Record

As the popularity of eSports continues to grow worldwide, it is hoped the stadium will play a part in boosting tourism, too. 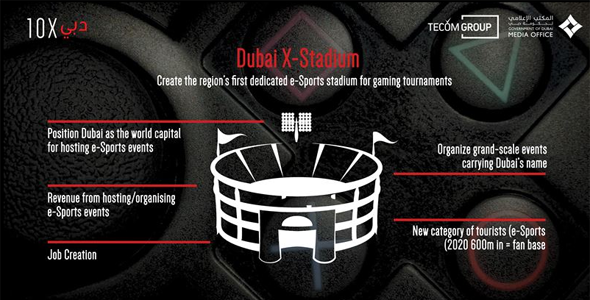 “We are living in a world where digital culture is reshaping all aspects of life, including sports,” said H.E. Mona Ghanem Al Marri, director general of Dubai Media Office.

“This has led us to develop the concept of Dubai X-Stadium, which will consolidate Dubai’s status as a key digital economy hub. The idea aims at attracting millions of eSsports gamers, spectators and enthusiasts from around the world and offering them unique online and in-person experiences.”

While details of the stadium – including where it will be located and when it will open – are yet to be released, this is definitely a project we’ll be keeping an eye on.

Indoor
Sport & Fitness
EDITOR’S PICKS
So, when is the next UAE public holiday in 2021?
READ MORE
All of the lavish new hotels set to open in Dubai in 2021
READ MORE
16 of the best pool passes in Dubai that are fully redeemable
READ MORE
All of the restaurants at West Beach, Palm Jumeirah
READ MORE
MOST POPULAR
There's massages and panoramic views at the highest spa in Dubai
7 beautiful things to do in Abu Dhabi this weekend: June 24 to 26
10 amazing things to do in Dubai this weekend: June 24 to 26
Celebrate 40 years of JA with 40 per cent off these top resorts
This new breakfast deal includes pool access and Dubai fountain views
YOU SHOULD CHECK OUT
Our website uses cookies and other similar technologies to improve our site and your online experience. By continuing to use our website you consent to cookies being used. Read our privacy policy here.