The RHS Chelsea Flower Show is a prestigious annual gardening competition which takes place annually in London, UK. The show, which has been running since 1913, is frequented by the British royal family and sees 157,000 visitors each year.

This year, a stunning creation by Visit Dubai and and British garden designer Tom Hoblyn was awarded a silver-gilt medal (second place) in the final competition.

Called Dubai Majlis Garden, the landscape included a teardrop water feature and Mediterranean planting as well as a majlis for people to meet and relax in.

The show, which finished on Friday May 24, also saw impressive entries by Yorkshire, IKEA, and even Facebook.

ALSO READ: We found a ‘DUBAI’ lake in the Dubai desert

The Dubai Majlis Garden was inspired by the Middle East, with curved walls representing the sand dunes, crystal clear water feature and a pavilion which aimed to provide a calming space amongst the busyness of the crowds.

The majlis was a cosy nook, lined with blankets and cushions, and fairy lights crawling up the wall. Also on the wall was an inscription in English and Arabic which said ‘Like water in the pool, like thoughts in mind.’ 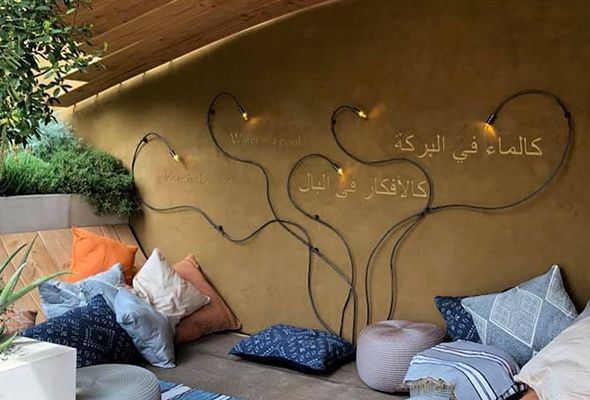 While hundreds of exhibitors took part in the Chelsea Flower Show, only a few were able to walk away with a coveted award. After months of preparation and hard work, the team behind Dubai Majlis Garden were pleased with their prize.

On their Facebook page, Landform said, “Thank you so much for the fantastic team, specialists and suppliers who helped to produce this breathtaking garden. It may not have won the coveted Gold medal but we are extremely proud of what we have achieved and it was an absolute pleasure working with Tom Hoblyn and his team.”

Culture
EDITOR’S PICKS
UAE holiday dates announced for Eid Al Adha
READ MORE
Update: Emirates again extends suspension of flights from India to UAE
READ MORE
Coming soon: Everything we know about Ain Dubai so far
READ MORE
Khorfakkan set to open new tourist attraction 580 metres above sea level
READ MORE
MOST POPULAR
Sign your kids up for a five-day theatre camp at The Junction this summer
Pics of the week: Your best photos of the UAE
New films to watch in cinemas this week: July 22 to 28
Caesars Palace Dubai transforms into a summer playground this Eid
10 things to do in Dubai that are free (or cost next to nothing)
YOU SHOULD CHECK OUT
Our website uses cookies and other similar technologies to improve our site and your online experience. By continuing to use our website you consent to cookies being used. Read our privacy policy here.