The new Dubai Metro trains have arrived in Dubai

The new trains will be able to carry 696 riders each…

Regular metro user? Get excited because the new metro trains are just a stop away and will be arriving at your station soon.

His Excellency Mattar Mohammed Al Tayer, Director-General, Chairman of the Board of Executive Directors of the Roads and Transport Authority (RTA) announced the arrival of 50 new Dubai Metro trains on November 7.

From the 50 trains, 15 will be used to service Expo 2020 and Route 2020, while the remaining 35 will be used to improve the level of service of the existing Dubai Metro – Red Line and Green Line.

So, is there anything different about the new trains?

According to Al Tayer, ‘RTA has introduced extensive improvements to the interior design of the new trains to make them more spacious and comfortable for riders.’

However, according to Al Tayer, changes to the interior have been put in place to increase the metro capacity by 8 per cent. 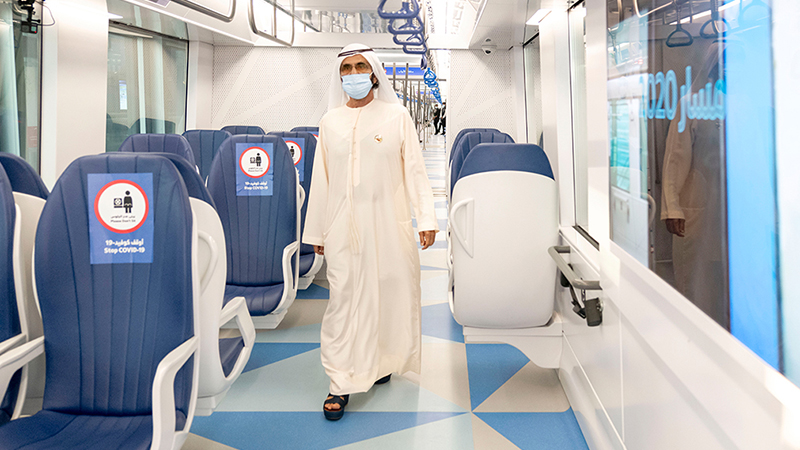 ‘Seats in the new trains are transversal in the Gold Cabin and longitudinal in both the Silver and the Women & Children Cabins,’ he stated. This change alone increases the rides from 643 per metro train to 696.

Seats were redistributed at the two sides of the train and the gangway connecting between carriages is now wider.

Other improvements include new designs for grab handles, lighting and the use of new digital advertisement displays.

A new illuminated dynamic line map has been introduced which will be used to indicate the metro route and stations.

ALSO READ: Here’s a list of the fines you can get in the Dubai Metro

The new carriages are configured to suit the use of people of determination and the smooth entry and exit of riders.

Seats were redistributed at the two sides of the train and the gangway connecting between carriages has been widened.

The iconic shape and colour of the Dubai Metro will remain unchanged.

News
Transport
EDITOR’S PICKS
UAE holiday dates announced for National Day
READ MORE
Emirates Dubai 7s is back: Here's why we're excited...
READ MORE
Tennis ace Andy Murray to play at Mubadala World Tennis Championship
READ MORE
UAE 50: Where to watch National Day fireworks in Dubai
READ MORE
MOST POPULAR
UAE confirms its first case of the Omicron variant
Alhosn Green Pass to only be valid for 14 days after negative PCR
20 of the best things to do in Abu Dhabi this long weekend: Part 2
First look: London-loved restaurant The Cinnamon Club opens in Dubai
Check out this amazing display at the world's highest outdoor infinity pool
YOU SHOULD CHECK OUT
Our website uses cookies and other similar technologies to improve our site and your online experience. By continuing to use our website you consent to cookies being used. Read our privacy policy here.