Mother of the Nation Festival run extended until January

Culture
Family
News
Things to do

The super fun family festival will now run until January 1, 2023…

The Mother of the Nation Festival (MOTN) is back in action on Abu Dhabi’s corniche and has now, in response to popular demand, has now been expanded to run until January 1, 2023.

The 6th Mother of the Nation Festival has been extended from 23 December 2022 to 1 January 2023 due to popular demand, having attracted thousands of visitors exploring a range of entertainment, live music performances, shopping and culinary experiences on #AbuDhabi Corniche. pic.twitter.com/SExfNwDmDs

It’s an event to celebrate the legacy of Her Highness Sheikha Fatima bint Mubarak, the Mother of the Nation. And the festivities are expansive, with the grounds  occupying a huge swathe of seafront Corniche leisure space.

What’s On at MOTN?

Conceived and executed by the Department of Culture and Tourism – Abu Dhabi (DCT Abu Dhabi), tickets for the 2022 edition which are on sale via the ticketmaster.ae website and start at just Dhs30.

The family focused fun is compartmentalised into six themed zones encompassing opportunities for guests to be entertained, enwisened and to dine out at a deliciously curated collection of pop-up yum-stufferies. There’s a strong thrill-culture balance. And we’re all about those ratios.

This year, at what is the sixth edition of the MOTN festival, the experiential zones are divided like this…

If you have a healthy distrust of resting heartbeats, we recommend you take the highway to the Thrill Zone, it’s likely to be your happy place. There’s a heist simulator (we’re in) and some intense, Metaverse-teasing multiplayer Virtual Reality action to get involved with, whilst Pixel Haus proposes a more classic approach to monopolising your screen time with retro arcade games, billiards and ‘challenges of skill ‘. That’s us out then. Rounding it all off with a throwback to spooky season, the Thrill Zone’s Haunted House is committed to serving up jump scares and soul-rattling screams. 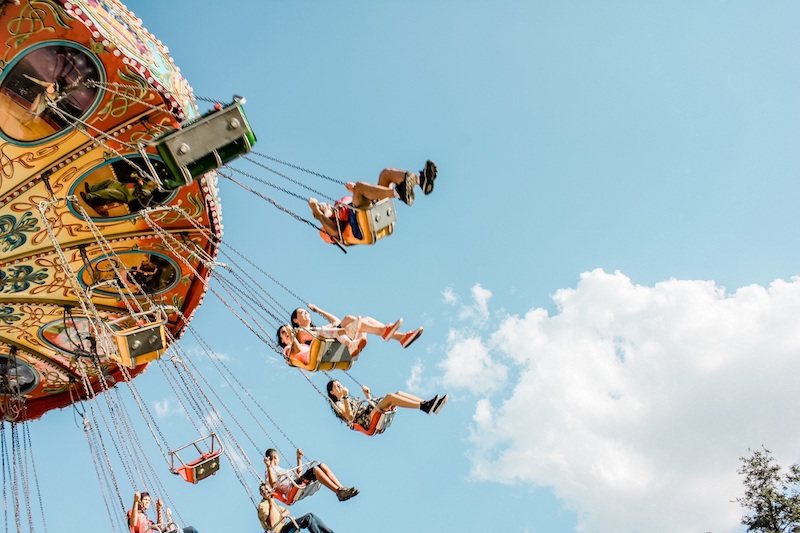 The MOTN carnival is making a grand return, featuring wild rides, soft play spaces and an invitation to interact with, parental trigger warning, the stars of YouTube and Netflix kids’ show sensation, CoComelon. Refreshment support comes from The Mac Factory and The Treats Club Dessert Bar. 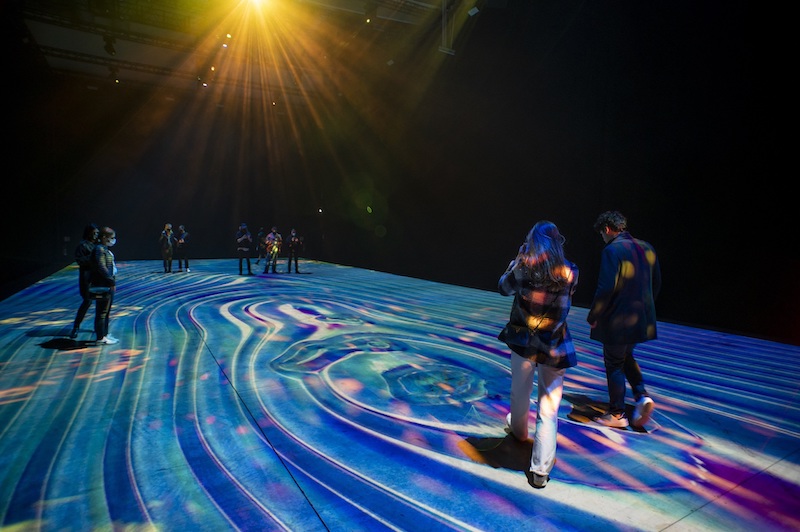 Here the focus is on creativity and the art of inspiring-awe. It sees the return of the MOTN Funhouse which this year features an interactive digital art installation by ANIMA, and a social media museum. Fingers crossed for a MySpace memorial plaque. Inspired dining includes Truffle Burger, Knafeh Bakery and Bar Biscotti. 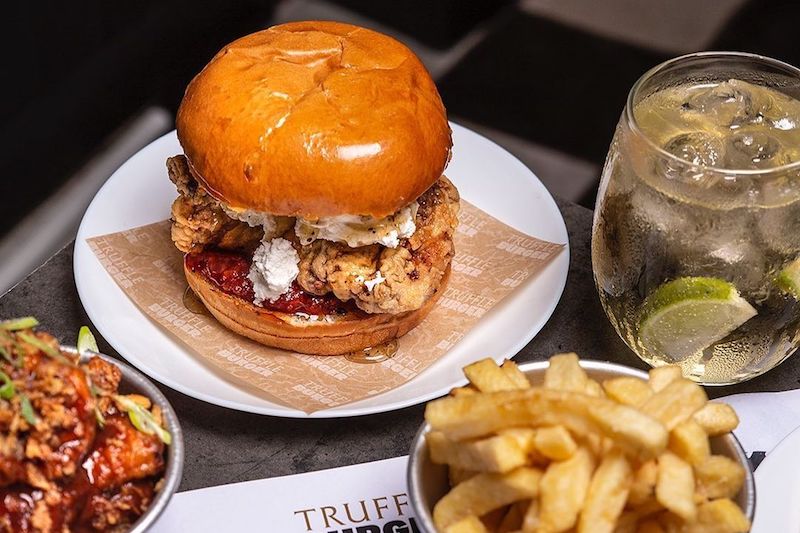 Participating pop-ups this year include a long list of foodie favourites from across the globe. From the UK, the halal burger joint Patty&Bun is found in the Food Hub; London’s famous cake parlour Peggy Porschen is in residency at the festival’s Shopping District; and Australian brand Knafeh Bakery by the Bearded Bakers takes its favourite Middle Eastern desserts to the festival’s Inspire Space. Another must-visit, Truffle Burger lands in Abu Dhabi at the festival’s Inspire Space with its classic burgers, which are a huge hit in the UK. 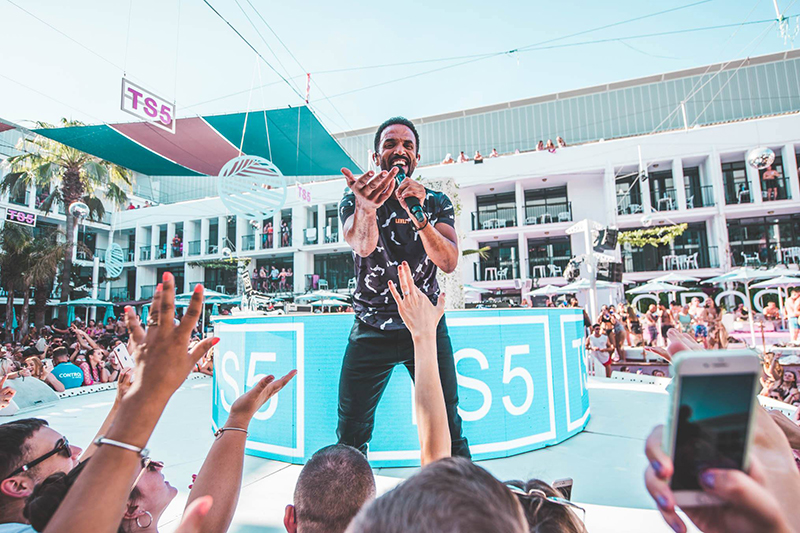 As with past years, the MOTN includes a few concerts with a blend of local, regional and international artists. The highlight of last year’s gig list, was undoubtedly Craig David who brought the festival to a close in the most spectacular of fashions. He was literally born to do it. This year we know

And because you can’t really have a proper festival without the soulful sounds of a live music seranade, Mother of the Nation has once again lined up a talented team sheet of performers for the 10 day tenure. Tickets are avilable to purchase via Platinumlist and start at Dhs145 Overseeing both the opening the close of the festival, Miami Band — hailing from Kuwait, not Florida — return to the MOTN stage to serve up piping hot hits from their four decade long career. Expect big sing-a-long energy from their tracks Juwaira” and “Ma’ak Radhi”.

Iraqi singer Aseel Hameem will making her voice heard on December 10. Known for supplying silky vocals to several popular Arab TV shows, her famous song “Ser Alhaya” is one of YouTube’s most streamed songs by a female Arab artist, having racked up more than 255 million views. Other big hits from her burgeoning back catalogue include ‘Hadarat El Walhan’ and ‘Al Mafrood’.

On December 17, it’s the turn of Egyptian pop powerhouse, Mohamed Hamaki — winner of the ‘Best Arabia Act’ at the 2010 MTV Music Awards and the Music Award in 2006 for the song “Ahla Haga Fiki”. Fans will also fondly remember Mohamed’s role as a coach on the fifth season of The Voice Ahla Sawt. We’re predicting his tunes “Yas Sattar”, “Ma Balash” and his 2022 hit single “Alby Habak Gedan” will be getting the biggest cheers from the audience.

And if you’re down for a spot of retail therapy, this might be one of the few festivals you can return from, without leafing through your purchases wondering what exactly you were thinking when you bought them. We don’t know who needs to hear this, (we do) but three felt top hats is probably three too many. As always this hub of big spender vendors includes a range of brands covering fashion, accessories and cosmetics.

Culture
Family
News
Things to do
EDITOR’S PICKS
Here's the full list of UAE public holidays in 2023
READ MORE
23 incredible things to look forward to in the UAE in 2023
READ MORE
Hidden gems: 10 UAE desert pop-ups to discover this winter
READ MORE
Where to travel in 2023: 10 new flight routes from the UAE
READ MORE
MOST POPULAR
8 lively things to do in Dubai this week: Jan 30 to Feb 2
Address Beach Resort flash sale can save you 45 per cent on stays
Snapped: Celebrities spotted in the UAE this week
Creators of Gaia and Shanghai Me to open 6 new restaurants in Dubai this year
5 lovely wine bars in Dubai that are perfect for date night
YOU SHOULD CHECK OUT
Our website uses cookies and other similar technologies to improve our site and your online experience. By continuing to use our website you consent to cookies being used. Read our privacy policy here.