Written by:
Miles Buckeridge
2 days ago

Disclaimer: we have no idea what 80 of them will be…

As a city of notable culinary credentials, Abu Dhabi is constantly providing fresh reasons to dine-out on. Big international brands and local restauranters have already launched some very exciting new dining destinations in 2022, but trust us, there’s so much more to come. Ladies and gentlemen of the jury, this is exhibit A…

There are few discussions as likely to derail a productive day in an office full of foodies as ‘what cuisine would you like to see more of in the city?’ Authentic Spanish cuisine is always near the top of the list. There’s just not much of it about in the restaurants of Abu Dhabi. The Madrid gap is real. It’s a problem Conrad Abu Dhabi Etihad towers feels pretty passionate about saying ‘adios‘ to. Their next addition to — what has to be one of the strongest hotel portfolios of culinary excellence in the city — is José by Pizarro, scheduled to start serving up little plates of fuego from March 2023. If the name sounds familiar, it’s possibly because José Pizarro is a pretty big deal in the world of gastronomic ambassadorship, showing off the finer points of Spanish cuisine to the world. The José Pizarro Group operates a clutch of well-respected restaurants across Europe, serving up (rather appropriately for Abu Dhabi’s recent acquisition of the Michelin Guide) Bib Gourmand recognised Iberian flare.

One of Dubai’s best-loved burger joints, and creator of the What’s On birthday sandwich — Slaw, will be landing at Al Qana for their first full time location in the capital. Bun-master-in-chief, chef Ali Yazdi has got his burger alchmey down to a fine art — with a menu positively popping with innovative topping combos, obnoxiously spicy tenders, seriously messy loaded fries and some absolute monster chicken fillet burgers. We’re also being tantalised by the fact the name of this outlet – features an ‘and more’ suffix. Speculation about what this might mean is rife in the What’s On office? Can we expect more fresh takes on gourmet fast food? Or perhaps some more sophisticated menu items? We honestly don’t now but we can’t wait to find out.

Also in Al Qana, we can expect the next capital outpost of Soo Matcha. One of the buzziest food trends going. Matcha lovers say the powder has loads of superfood-like benefits so why not give it a try at Soo Matcha, the UAE’s first all matcha inspired café located on Al Banadir Street, Muroor. You’ll find everything on the menu from matcha morning yogurt, matcha ice cream, matcha and coconut milk iced lattes, and more, all which use ceremonial Japanese grade of matcha green tea. @soomatcha.uae 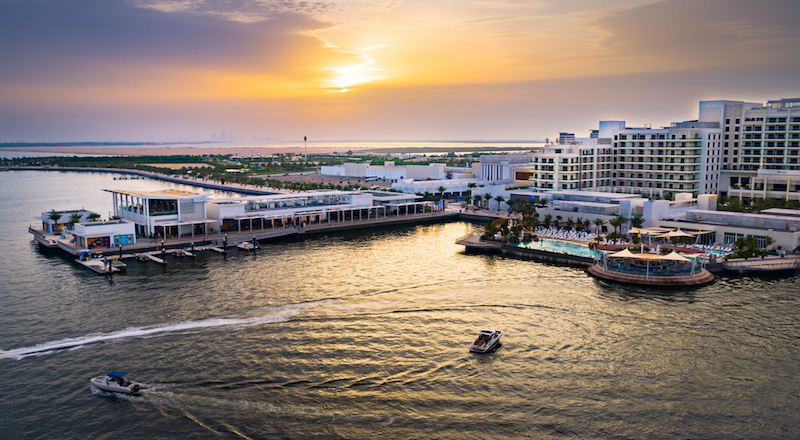 As if the culinary array wasn’t already impressive enough at Yas Bay, there’s a slew of new restaurants landing in the area thanks to a brand new food hall. Slated to open at some point in Q1 of 2023, Foggs Food Hall is an iteration of top Dubai pub, Phileas Fogg’s, and promises to bring an array of no less than 16 restaurants to us in the capital all under one roof. Fogg’s Food Hall, will include concepts such as Bad Burgers, El Chapo’s Tacos, Slice Slice Baby and Balti Towers. 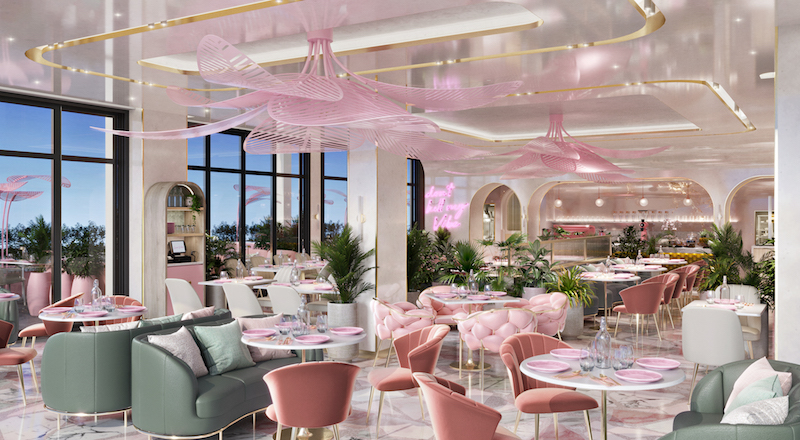 The first Vibe Cafe, based in the trendy foodie district of Al Wasl, opened its doors in 2018. And it hit the circuit with real caffeinated enthusiasm, sassy pink decorations, buzzing lipstick neon art work and a menu filled with cuisine that screamed for Instagram attention. It, rather appropriately, is a whole vibe. Next up was a licensed DIFC edition of the brand, still flying that same iconic rose-tinted colour palate — and with the mission of dazzling a new crowd, in another of the city’s most important culinary crucibles. It was only ever going to be a matter of time before the Vibe Tribe moved their neon-disco stylings to the capital, and we’ve just received confirmation that Abu Dhabi will be the site of their latest endeavor, Love Vibe. We don’t have the full details yet, we know that the opening is scheduled for some time in early 2023. We have the gorgeous renders, confirming the return of those famous pastel swathes, although this time the look feels like there’s been a deliberate up-tick in sophistication, a more mature sort of Vibe. 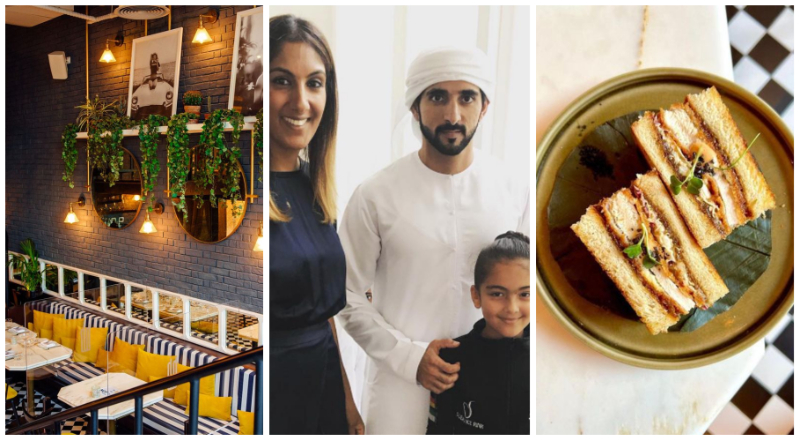 This H.H. Sheikh Hamdan bin Mohammed bin Rashid Al Maktoum, Crown Prince of Dubai approved restaurant, BB Social Dining has been such a succesfull and influential concept in its DIFC locale, that we’re honestly surprised it hasn’t conquered the world just yet. But it’s in the works at least, following on from a first KSA outpost earlier this year — an Abu Dhabi branch at the appropriately handsome Rosewood hotel slated for a December launch, looks set to round out a big 2022 for the BB gang. If you’re wondering what to expect, we can share a few of our fave menu options to look out for. We’re huge fans of their Japanese and Korean style baos (particularly the crispy duck); the edamame hummus and crispy sprouts make for excellent mezze; and for something more substantial we’d lobby for your consideration of the wagyu katsu, beef pho and harissa lamb chops. @bbdifc 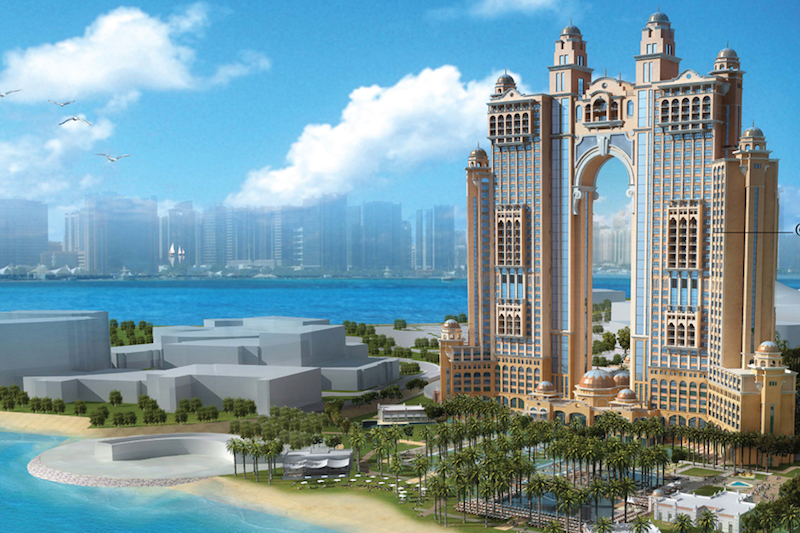 This iconic ‘arch-on-stilts’ hotel (the architecture formally known as Fairmont Marina Abu Dhabi) that seems to have been a part of the Corniche skyline forever, finally opened at the end of last year. But we don’t have access to the full range of its culinary clout just yet, in fact it’s only currently offering seatings at the Turquoise all day diner, and a cafe called — Godiva. Still to come are the remainder of the 10 signature restaurants and bars — Vero Italiano will be feeding guests with the flavours of southern Europe; The Flame — is all set to start searing prime cuts as the resort’s “five-star” steakhouse; The Bakery Club is designated to deliver diners freshly baked bread, cakes and pastries; there will be an international melange on offer at People’s Restaurant; sweets desserts at Godiva Café; with Cuba Cigar Lounge, Privé Lounge and bar — Anti-Dote rounding out the culinary portfolio. 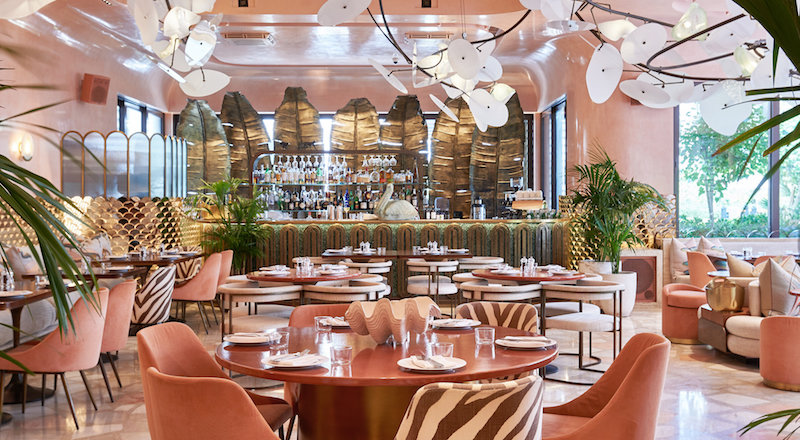 We have received confirmation that a second UAE branch of Flamingo Room by Tashas will be opening somewhere in Abu Dhabi later this year (either Q3 or potentially Q4), though we cannot currently confirm or deny where that might be. The original Flamingo Room by Tashas opened its doors back in 2017 at the appropriately stunning Jumeirah Al Naseem hotel in Dubai. The striking interiors there, give sophisticated finishes to inspiration drawn directly from Africa’s enchanting wildernesses. Playful features such as meerkats and monkeys cast in bronze blend effortlessly with flamingo-pink and gold art-deco styling, and the elegance of the food and drinks menu. It’s peak safari chic.

We’re not 100 per cent sure why, but we believe it has now been proven beyond any reasonable doubt, that Abu Dhabi absolutely loves a food truck. Maybe it’s a nostalgic call back to the romance of nomadic life; maybe it’s the excitement of semi-permanence — fleeting visits from innovative pop-ups that are here one moment then *woosh* become one with the wind; or perhaps food really does taste better when the kitchen has got a few miles on the clock. Whatever the reason, food trucks are here to stay in Abu Dhabi. The concept. Not the trucks. Perhaps the most exciting individual addition to the capital’s meals-on-wheels fleet, is the EL&N Cafe on the Yas Bay Waterfront. You’ll find it opposite Etihad Arena, next to the Emerging Man sculpture. This food truck is essentially an amuse-bouche for the full fixed cafe opening in Yas Bay at some point in the not-too-distant future.

This homegrown hidden gem, a Thai Restaurant represented by a totemic cartoon duck ‘Kew’ — will be launching its first permanent fixture in Abu Dhabi, located at Yas Mall. It’s an eatery with a big following in Dubai, built off the back of highly covetous, occasionally unpronounceable, Bangkokkian cuisine  — pad krapow, tamarind chicken wings, kanom tom, tom yum and of course mango sticky rice. And once you go sticky, there’s no others you’ll picky.

Yet another concept from MBT Restaurant Management, this seafood focused diner promises a “unique signature interactive tableside experiences”. We don’t know for sure, but from the whispers we’ve heard, it sounds like this menu will have a Mediterranean flavour. Could we see plateless servings of paellea, like a sort of European version of the Dampa serving ritual? We can’t wait to find out.

Also at Al Qana, this will be the fourth UAE outlet of the popular Lebanese restaurant chain owned and operate by MBT Restaurant Management. The group has had a busy year, with new concepts Beirut Sur Mer and Raclette opening on Saadiyat Island to grand appraisal. The brand’s reputation for authenticity, consistency and swoon-worthy interior design makes this announcement worth getting very excited about.

There’s not a lot of info out there in the public domain, but if this is the same Kronful as the one in Beirut — Yas Mall has some big waves of Levantine comfort food on its way.

Again we don’t have the details on this yet, but an izakaya is a boutique Japanese restaurant, usually serving sushi or street food.

And here it is, how we got that figure of 106 (which to be fair we did make clear would seem like a ruse in several disclaimers). We have no confirmed opening date for these yet, but you can check out all the latest confirmed information in our most recent completion update.

Eat & Drink
Things to do
EDITOR’S PICKS
Here's the full list of UAE public holidays in 2023
READ MORE
23 incredible things to look forward to in the UAE in 2023
READ MORE
Hidden gems: 10 UAE desert pop-ups to discover this winter
READ MORE
Where to travel in 2023: 10 new flight routes from the UAE
READ MORE
MOST POPULAR
Ras Al Khaimah Fine Arts Festival returns this weekend
The best new bars in Dubai
15 Dubai pool and beach passes that are all fully redeemable
Try something new: 21 brilliant new things to do in Dubai
Dr Who, C3PO, Andy Serkis and more celebs confirmed for Comic Con
YOU SHOULD CHECK OUT
Our website uses cookies and other similar technologies to improve our site and your online experience. By continuing to use our website you consent to cookies being used. Read our privacy policy here.