AND ALSO…
Signature by Sanjeev Kapoor has created a three-course degustation menu featuring the likes of Nareli Prawns, Pani Poori shooters, Sanjeev’s Tandoor, and Delhi Butter Chicken. Available all weekend between 7pm and 11pm, it is priced at Dhs150 (inclusive of soft drinks) and Dhs250 inclusive of house beverages. 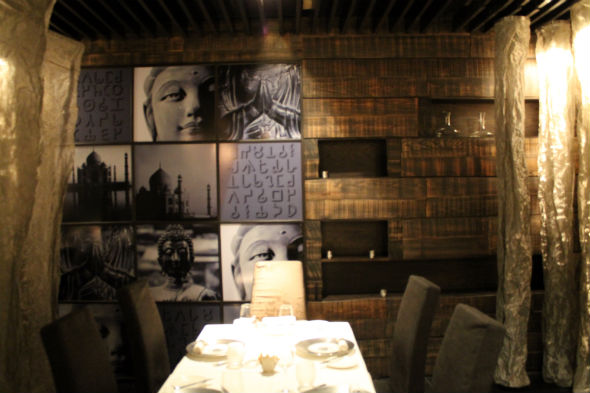 PLUS MINUS
Stimming, a German DJ by the name of Martin, has always demonstrated a sophisticated yet accessible sound that’s way beyond his years and as such, is rather regarded as the production godfather of the Diynamic stable. There is little he can’t do with sound and that has been evidenced by his diverse and devilishly detailed discography. His breakthrough hit came in 2008 with Una Pena, a swirling, spiritual tech-house number that is riddled with synthetic and synthesised sounds that really jump out of the speakers. The track’s clean, glistening percussion, expertly buried vocal chants and richness of texture sure did stand it apart, and from there he has never looked back. Expect to feel plenty good when Stimming plays live in Dubai for the first time ever this coming weekend.

SPACE STALWART JETS IN
Ibiza stalwart Jonathan Ulysses brings the sound of the Balearics to Dubai. The British DJ has over two decades’ experience playing the island – much of that time spent as resident at seminal club Space. He explains how a switch from Sunday to Monday nights gave him more freedom in his sets. “This summer I moved from We Love to Café Olé,” he says. “It was like the old days at Space, where just residents played, and not so many guests. I was playing longer hours and I was more open with what I played.” It was a big summer for Ulysses’ label, Ulybug Music, as his track The Flight proved popular with DJs David Guetta, Michael Woods and Eric Morello. Ulysses plays beach bar Zero Gravity this month – where he’s joined by another Ibiza favourite Marco Loco – and says he always enjoys his sets in the UAE. “I have greet memories of Dubai – particularly playing at Sandance in front of 15,000 people. It was truly awesome. I still have a photo from that evening on my Facebook page.” 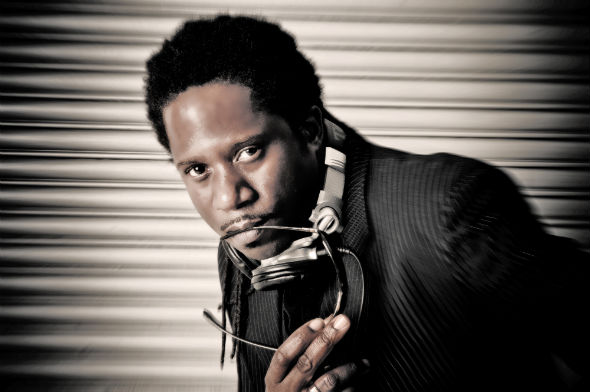 MAGNETIC FIELDS FESTIVAL LAUNCH PARTY
In the era of mega-sized – and often faceless – festivals, it’s always a bonus when a fresh, intimate event pops up on the radar. Swap vast filth-strewn festival sites in Europe for a heavenly palatial location under India’s starry sky, and you’re on to a winner. That’s exactly what you’ll find at Magnetic Fields, the three-day music, arts and food festival staged in a 17th century palace in Shekawati, Rajasthan. Think gorgeous setting, access to a real palace, Bedoiun tents, cosy chats around pit fires, yoga sessions, souk markets and costumed balls – all set to a soundtrack by avant-garde international DJ headliners and a host of local legends – and, well, you get the picture. Dubai-based DJ MoCity was so impressed with this little slice of contemporary culture that he’s embarked on a mission to spread the word amongst the UAE’s music lovers and intrepid adventurers. To herald this year’s Magnetic Fields festival – due to take place December 12 – 14 – Mo has enlisted local and international talent for a Magnetic Fields Launch Party here in Dubai, on Thursday.

DJ RUCKUS
Famed and feted by the famous, Hakkasan Las Vegas resident – alongside Teisto and Calvin Harris – DJ Ruckus brings his unique style to VIP Room for one night only.

WILD WADI FRIGHT FEST
For the next month, Wild Wadi is offering the UAE’s first haunted house in a waterpark with Haunted Heights. While the pairing seemed odd to us, the house itself was surprisingly frightening. Imagine zombies, a long-haired pale-skinned screaming girl reminiscent of The Ring, dark corridors, objects floating in mucus liquid, and plenty startling surprises. While the tour is still fairly small scale (taking under 10 minutes in total), it definitely gets adrenaline pumping. Wild Wadi’s Trick or Treat, on the other hand, is seriously kid friendly. You’re given a Halloween bucket to collect candy and a themed map to plot your course. Costumed attendants wait with barrels of gummy candies or Blink mints (we ended up with eight packs) throughout the park. The Halloween-themed scenes make for great photo ops.

Until November 8
Haunted Heights, Wild Wadi, 1pm to 6pm daily. Dhs295 for general admission over 1.1m, Dhs235 under 1.1m, which includes single admission to ‘Haunted Heights’ or the ‘Trick or Treat’. 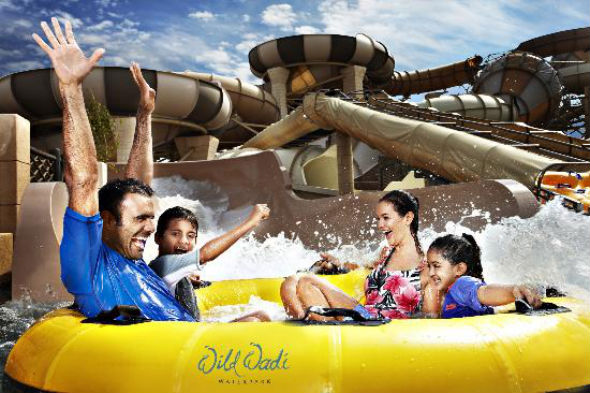 BRAND NEW BRUNCH
Former What’s On Restaurant of the Year OKKU launches its Friday party brunch, Disco Sushi. They say, ‘expect an original twist on brunch with a stunning bespoke menu and exceptional bottle service set against a backdrop of 80s/90s retro chic music and quirky style from the best party era’. For Dhs599, you get arrival and ‘generous’ table drinks, as well as a 12 course bespoke menu. Don’t forget those neon sunglasses.

JACK BBQ
QD’s at Dubai Creek Golf and Yacht Club launches a Friday Jack BBQ. Running from 1pm for three hours, it is a brunch premie with a flat fee of Dhs290 including food and selected beverages.

GOING UNDERGROUND
Canadian DJ and producer The Mole will be making his debut in Dubai this week when he plays for Stereotype in one of the city’s newest clubs, The Basement. The Mole – otherwise known as Colin del la Plant – has been DJing since the early ’90s. Originally from Canada, he relocated to Berlin a few years ago. His first album, As High As The Sky, was released in 2008 to critical acclaim. Supporting him at The Basement will be local DJs Hassan Alwan and Somalie, who explained that that the aim of Stereotype was to “introduce forward-thinking artists to the desert”. Somalie added that the club night’s new Basement home was “the right place for our music. It’s all about bringing an underground vibe to Dubai.”

SEE THE BIGGEST PUMPKIN EVER TRANSPORTED TO DUABI
Hailed as one of the largest ever grown, special crates and lifts were required to get it on and off the Emirates A380 from Paris to Dubai. The large, bulbous, French gourd clocks in at a whopping 500kg, and is being brought to the UAE for a special display inside the artisan grocer Market & Platters in Dubai Marina. 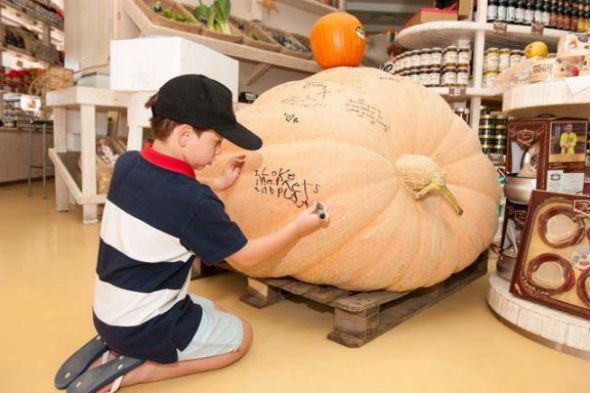 AMERICAN ADVENTURE
Don’t let the name or the branding fool you. The Boutique Kitchen may sound like it serves super-food salads, but this new delivery firm’s menu is actually an homage to good ole’ American diner food. Mac and cheese, hot wings, southern fried chicken, cornbread – The Boutique Kitchen has all this and more, plus thick, homemade milkshakes to wash it all down. You can even have a grilled cheese sandwich delivered to your door. Created by a group of friends raised in the U.S. and hankering after the food of their home country, the Boutique Kitchen’s dishes are hand prepared using ingredients shipped in from the States.

XZIBIT LIVE
American rapper Xzibit, known just as well for his role in presenting MTV hit show Pimp My Ride will be at People by Crystal to peform.

OKTOBERFEST AT BARASTI – LAST CHANCE
The middle deck at Barasti will host live performances from German band Die Lauser every night from 6pm, and there’ll be ample hops, schnitzel, wurst and frites. Running until October 25.

CRACK THE CASE
Puzzle house mania continues to sweep Dubai with the opening of Escape Quest in JLT, the third problem-solving game in the city. It has two rooms full of riddles, codes and puzzles.

SESSIONS LIVE AT BAPAS
The beautiful Belgian restaurant and lounge at H Hotel hosts the finals of their monthly singer/songwriter contest, ‘Sessions Live at Bapas’. Winners from the original jam held on October 11 will be back, each playing a 30-minute set of original or cover songs. Enjoy the tunes while tucking into European-styled tapas dishes in a sleek and relaxed atmosphere.

MARINE ENVIRONMENTAL DAY
The Dubai Marina Yacht Club want you to learn more about the deep blue sea. This weekend they have a day of fun for all the family with their Marine Environmental Day where you can expect entertainment, marine themed children’s games and activities, live cooking stations and competitions.

URBN LAUNCH
White Dubai, the rooftop club at Meydan Racecourse launch their new URBN night which they say is ‘an evening dedicated to only the best Hip Hop and RnB music’.

WINNER WINNER CHICKEN DINNER
Popular Afro-Portuguese chicken restaurant has undergone a major summer refurbishment in The Greens, much to the dismay of residents. But worry not, the doors to the family-friendly outlet are back open, and it looks sparkling. The renovation, carried out by reputed interior design company Keane, is all very cosy atmosphere, as is the outdoor terrace.

CELEBRATE WORLD PASTA DAY
Nais Italian Kitchen in JLT are serving up a special ‘all you can eat’ pasta menu for one day only where diners can choose from delicate penne or spaghetti cooked beautifully in a range of specialist sauces. All that for just Dhs50, between 11am and 9pm.

VISIT A COFFEE MUSEUM
Drinking coffee is much more than getting a caffeine hit – it’s a ritual, whether you French press at home or grab and go on your way to the office. It’s integral to Arabic traditions of hospitality too, which is why it’s surprising that there hasn’t been anywhere in the region that showcases its coffee culture – until now. Thanks to Khalid Al Mulla, owner of coffee company Eastern Men and Co, Dubai is now home to the largest coffee museum in the Middle East. 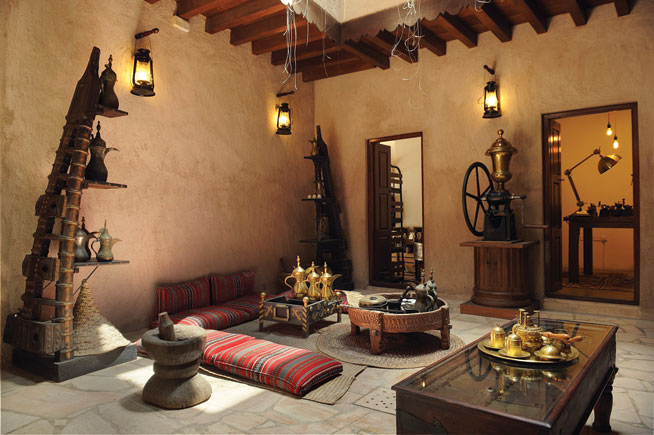 Culture
Eat & Drink
News
Nightlife
Sport & Fitness
Things to do
Well-being
EDITOR’S PICKS
Ramadan in Dubai: 48 iftars to try
READ MORE
Where can Dubai residents travel? Check out these 14 destinations
READ MORE
Rumours, facts and reveals: New Abu Dhabi bars and restaurants
READ MORE
UAE announces reduced working hours for Ramadan 2021
READ MORE
MOST POPULAR
Review: Rainforest camping at The Green Planet Dubai
The rules for children wearing face masks have been updated in UAE
Etihad sale: Surprise gift boxes and a chance to win 50 times your airfare
Break your fast in style at W Dubai - The Palm this Ramadan
Yoga and art combine in Dubai's newest immersive fitness class
YOU SHOULD CHECK OUT
Our website uses cookies and other similar technologies to improve our site and your online experience. By continuing to use our website you consent to cookies being used. Read our privacy policy here.