What’s On has a Jessie Ware interview ahead of Blended Dubai 2015. See pictures and videos ahead of the music festival in Dubai Media City.

“I think a lot of people still think of me as their little secret,” says Jessie Ware of her legions of fans. This, in spite of the fact she is Mercury Music Prize and Brit Award nominated, has two top ten albums under her belt, and features on the soundtrack to arguably the biggest movie release of the year, Fifty Shades Of Grey.

She may be the last to realise it, but the cat is definitely out of the bag about Ms Ware.

Music lovers of Dubai are no exception, and they can look forward to Jessie’s first UAE performance. “It’s a bit of an eclectic line-up,” says the 30-year-old South London singer. “But I think Kasabian are great, and I’m hoping I get to meet Craig David.”

Perhaps David will become another one of Jessie’s famous friends – the singer counts Adele, Sam Smith and Ed Sheeran among her mates and Solange Knowles is a fan. 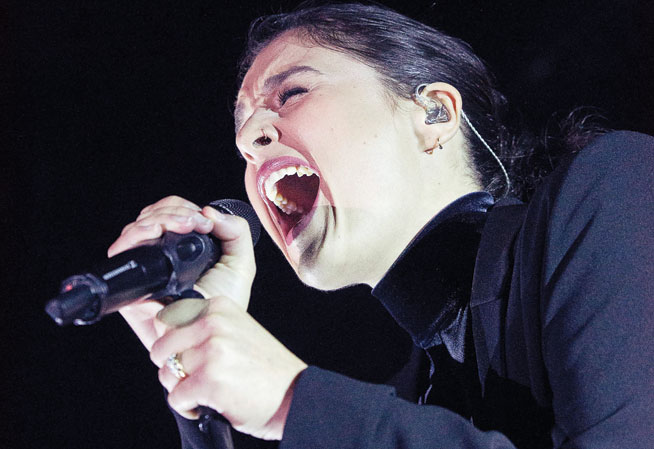 “She’s really nice and has always been really cool to me. I met her at Coachella a few years ago and we stay in contact online.” Does Solange’s big sister have Ware’s album Tough Love on her iPod too? “Well, I’d definitely like to think so,” says Jessie. “But I’m yet to meet Queen Bey.” She has met that other titan of the charts, Taylor Swift.

“She’s lovely. I want to see her perform live. I think I can learn a lot from her – you watch her on stage and she’s got it down. She doesn’t put a foot wrong.”

When she isn’t hanging out with the stars, Ware is at home in London with her husband, Sam, and their French bulldog puppy Stanley, who nips Jessie’s finger during our interview. “I think I’ll come back from Dubai and go to puppy training classes,” she says. But not before she checks out what the UAE has to offer.

“I’ve always been intrigued by Dubai,” says Jessie. “I’ve done a lot of stopovers but this will be my first time getting past the airport. A few friends live there and I’ve got the day off after the gig so we’re going to hang out and see the sights. I’ve heard they do a great brunch over there.”

News
Nightlife
Things to do
EDITOR’S PICKS
Ramadan in Dubai: 50 iftars to try
READ MORE
Where can Dubai residents travel? Check out these 14 destinations
READ MORE
Rumours, facts and reveals: New Abu Dhabi bars and restaurants
READ MORE
UAE announces reduced working hours for Ramadan 2021
READ MORE
MOST POPULAR
There's a 30 per cent sale taking place during the long weekend on LegalHomeDelivery.com
Pics of the week: Your best photos of the UAE
Here's why you need to visit Mimi Kakushi's new Friday lunch
New films to watch in cinemas this week: May 13 to 19
Torno Subito's new lunch menu offers a quick mid-week vacation
YOU SHOULD CHECK OUT
Our website uses cookies and other similar technologies to improve our site and your online experience. By continuing to use our website you consent to cookies being used. Read our privacy policy here.