What’s On has video of the UAE’s craziest rope swing which took place in Ras Al Khaimah. The rope swing was a stunt from the TRAKS PRO team.

There aren’t many people in the UAE – or the world, for that matter – who would look at a giant 400-foot cliff in Ras Al Khaimah and say “let’s build a rope swing here just for fun.’ But that’s exactly what happened this month. 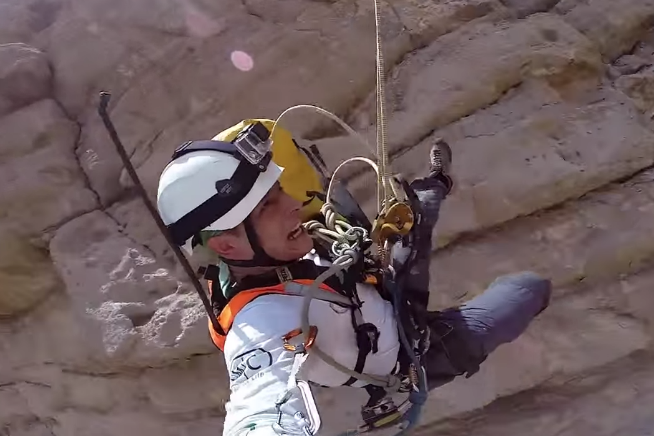 The extremely brave and burly rope equipment pros from TRAKS, together with talented rock climber Read Macadam, turned the rocky mountains in Ras Al Khaimah into their personal swing set and let loose in some jaw-dropping jumps – all in a bid to mark their 10 year anniversary in the region.

Generally known as the go-to training centre for employees who will be working at great heights, the boys wanted to create an outrageous rope swing to show off their rope rigging skills.

The unforgiving yet stunning terrain of the Hajar Mountains in the UAE’s northernmost emirate was the perfect backdrop for the swing, the equivalent of a 30-storey high building up, which took four arduous days of rigging to set up the stunt.

“Well, why not?” says TRAKS daredevil Johnny Salvador when asked why they decided to set up the giant swing.

“Not only was our company founded in Ras Al Khaimah but we really wanted to highlight the emirate as a incredible destination,” continues Salvador.

Luckily, they filmed the madness as they sent a bunch of their staff members flying on probably the UAE’s biggest, scariest and craziest rope swing.

Check out the full video here:

News
Outdoor
Sport & Fitness
Things to do
EDITOR’S PICKS
Here's the full list of UAE public holidays in 2023
READ MORE
23 incredible things to look forward to in the UAE in 2023
READ MORE
Hidden gems: 10 UAE desert pop-ups to discover this winter
READ MORE
Where to travel in 2023: 10 new flight routes from the UAE
READ MORE
MOST POPULAR
Cult Expo bakery, Bread Ahead to open in Mall of The Emirates
First look: Milos by Costas Spiliadis opens in Atlantis the Royal
Upcoming performances, international artists and more in Dubai
16 upcoming shows, sports events, concerts and festivals in Abu Dhabi
Win a holiday around the world with Dubai Creek Resort
YOU SHOULD CHECK OUT
Our website uses cookies and other similar technologies to improve our site and your online experience. By continuing to use our website you consent to cookies being used. Read our privacy policy here.