Rhian Adams – rugby star, bodybuilding champ and all-round athletic machine talks about how she witnesses the fitness and why she’ll never leave Dubai.

Where are you from? Wales.

When did you come to Dubai? Fifteen months ago.

What do you do here? I’m an instructor at Flywheel Dubai. Flywheel’s the best exercise class I’ve ever done, and I’ve just celebrated my first year of it. Alongside that, I do personal training, which I love, and have done for ten years now.

When did you first get into athletics and fitness? When I was eight, I joined a running club and competed every weekend in 100m, 200m and high jump. My running coach was an ex-army commander, so the sessions were gruelling, but I loved it. 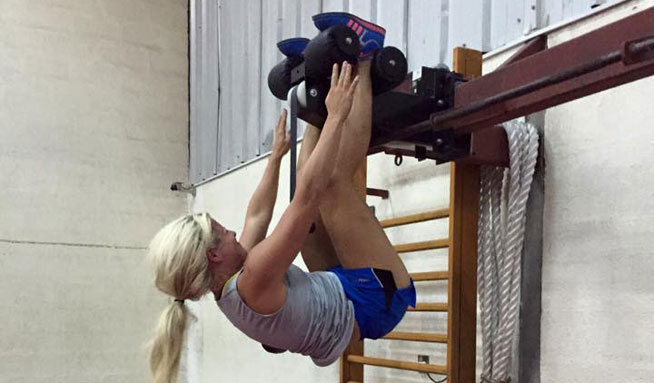 What inspired you to start bodybuilding? I saw something online, about eight years ago, advertising the Fitness World Championships in Las Vegas. I’d done beauty pageants before, so it was the next step for me, and I can’t believe the success I’ve had since then.

What was the first competition you entered? The Welsh National Amateur Body-Builders’ Association Championship. I was fortunate enough to win and go to the British finals. I had to perform a 90-second routine to my choice of music, and was judged on my body condition, symmetry, muscle balance and stage presentation.

What are you most proud of in your athletic career? I competed in the International Natural Bodybuilding Association (INBA) World Championship, in Dubai, in June, and there were entrants from 48 countries. I entered three different categories, and came second in Sports Model, third in Ms Fitness and fourth in Bikini. I was gobsmacked.

I’d worked so hard. My goal’s never to win. I compete against my own mind-set and myself. Placing’s always just a bonus. This was the first competition I’d done without a coach, and as a result, it was
my best performance yet, and biggest personal achievement.

How often do you have to train? Every day. Some days I’ll have a weights session, two classes, and then rugby training. People think it’s easier for me to reach a lean condition because my work’s high intensity exercise but the truth is your body gets tired, your cravings go through the roof, and it gets hard to focus on your training, never mind lift decent weights. Balance is key.

When was the last time you had a load of junk food? Last weekend. I overindulged on a humongous bag of peanut butter cups and a few Patchi chocolates.

What made you branch out and start teaching fitness? I love teaching – making people smile when they’re grumpy, making them work hard when they’re tired after work, and bringing positivity into a session when they really don’t want to be there. 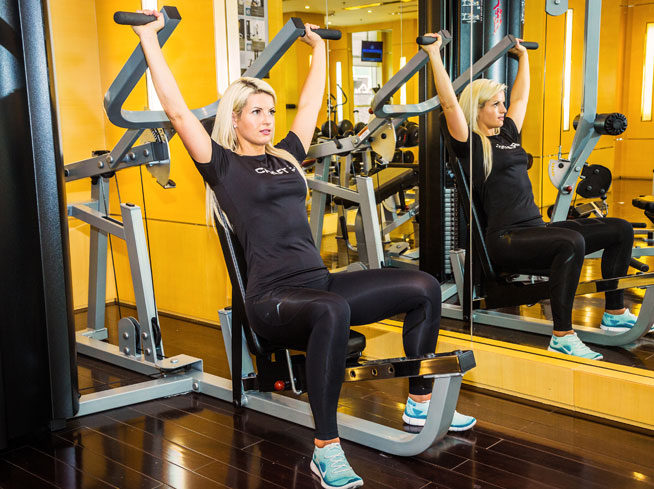 What’s the best thing about your job? Seeing people transform. The physical transformation’s one thing, but when I see a client increase in confidence and self-esteem, I know my time’s been well invested. Some of my clients are my greatest friends, so some days I don’t feel like I’m working at all.

What’s the toughest? Some days, my legs don’t feel like they’re mine, and have nothing left in them to cycle.

You play rugby competitively as well. How did you get into that? I represented the Welsh national team in Women’s Rugby, from the age of 17 to 21. As soon as I picked up a rugby ball, I developed an incredible passion for the game. Every day during the summer holidays, my brother would teach me how to kick, pass, sidestep and tackle, and to this day I’m so thankful for that. My love for rugby has brought me two knee operations, but I’m still playing, stronger and fitter than ever.

Have you won any rugby tournaments? I was selected for the UAE North side this season, and not only did we win the league, but I was named Player of the Tournament. I’ve enjoyed playing with the Wasps Women, and we were unlucky to lose in extra time last year. We’ve now joined up with the Sharks for this season, so this year we’ll win the Sevens.

Have those impressions changed? Yes, in a way. Christmas away from home killed me last year. It’s such a precious time of year and I need to be at home. I can’t wait to spend two weeks at home this December.

Favourite place to eat in Dubai? For my treat meal, Cheesecake Factory. Everything from the bread and the turkey burger to the sweet potato fries and Oreo classic ice-cream milkshake is heavenly – and now I’m craving it!

If I’m being healthy, Café Vienna in Business Bay is a great spot. The salads there are far from boring. I just split a large one into two and it lasts the whole day.

Favourite place to catch up with friends? Caribou Coffee. I can’t believe I didn’t know Caribou before arriving in Dubai – I love it! When you drink Americanos, the distinct taste of their coffee makes a difference. Plus the cups are too small everywhere else.

Favourite club or music event in Dubai? Flywheel’s all you need.

Favourite international DJ or band? I think I got all the sporty genes, whereas my brother has a huge passion for music. When I’m at home, I’ll just throw on some Jack Johnson.

Favourite Dubai-based DJ or band? You’ll have to introduce me to some Dubai bands to follow.

What do you do when you need some ‘me’ time? Every morning, I have half an hour to myself with a cup of coffee to reflect, pray and focus on the challenges that the day will bring. People think I’m crazy when I say this, but I’m a much better person for it, and my day runs so much better.

How would you sell Dubai to someone who has never visited the city? I’d tell them it’s the complete opposite to what they read in the newspapers. My plan is to get as many of my family and friends to live here as possible, so I can stay in Dubai without missing them so much.

What’s the secret to success here? Grab every opportunity by the horns.

Top tip for getting the most out of Dubai? Don’t get caught up in the flashiness of having the best car, the biggest villa or the most expensive handbag. If you’re here to save, stick to your guns. 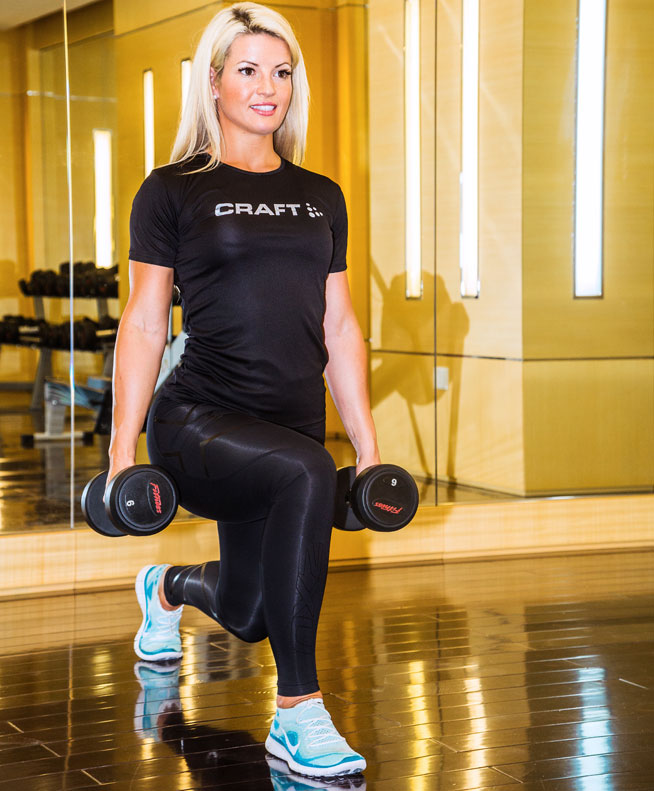 What’s next for you? My plan is to compete in the INBA Dubai this November, and qualify for the Natural Olympia the following week, in Las Vegas. I’m also playing in the Dubai Sevens in December. In last year’s final, I got hit in the face with the ball and rushed to hospital with concussion, and we lost! I’ll never be able to live it down, so this year we have to win.

I’m leading a group up Kilimanjaro in March, which is hopefully something I’ll do twice a year, and eventually climb even bigger mountains.

In the last ten years, I’ve achieved more than I ever imagined. I’m truly thankful for every opportunity that’s come my way, and how it’s shaped me into the person I am today. I use my accomplishments to inspire, lead and motivate others to become the best they can, in all aspects of their lives. I have a heart for people, a heart for fitness, and I love living out my passion every day.

– Find out more about Rhian at Facebook or at rhianadamsfitforlife.co.uk.

News
EDITOR’S PICKS
13 Sheikh Hamdan-approved restaurants in Dubai
READ MORE
Dubai brunches temporarily banned in new preventative measures
READ MORE
12 upcoming Dubai mega-projects we can't wait for
READ MORE
16 of the best beach bars in Dubai for sundowners
READ MORE
MOST POPULAR
Stay at the new Hilton Abu Dhabi Yas Island with park access from Dhs429
This Dubai beer garden is the perfect post-work watering hole
BOA Dubai has closed forever, here's what will replace it
2 Dubai chefs are teaming up for a cool collaboration in D3 next week
Win! Dhs500 to spend on food and beverages at Dubai Festival City Mall
YOU SHOULD CHECK OUT
Our website uses cookies and other similar technologies to improve our site and your online experience. By continuing to use our website you consent to cookies being used. Read our privacy policy here.