Two pro motocross riders rip up the desert dunes ahead of the Redbull X-fighters World Tour on Friday, October 30.

If these incredible images by extreme photographer Predrag Vuckovic are anything to go by, then the 2015 Red Bull X-fighters World Tour season finale here in Abu Dhabi on Friday at the Corniche is going to be pretty spectacular.

American motorcross riders Ronnie Renner and Drake McElroy headed out on a dune bashing expedition with a difference this weekend when they shredded the Rub Al Khali desert on the outskirts of the city. 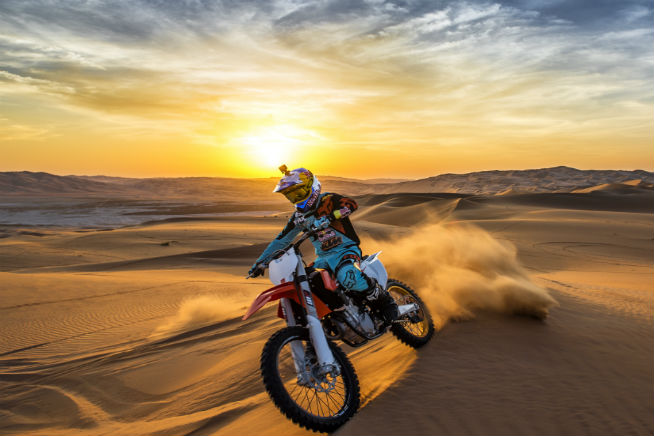 The above images have been released of the two pro riders ripping up the landscape performing skids, twists and cool gravity-defying aerial tricks at sunrise.

Pretty stoked on this by @predragvuckovic .mostly cause, well, I managed to twist my knee first berm shot of the day so the most I could squeeze out of this mornings shoot was this cross-up. #killing it . Good thing I know good photographers!! So pumped to have the living legend shooting @smokingseagulls and I. #cannthavetheupswithoutthedowns #crazyCAMELracing

Currently in its fifteenth season, this year’s Redbull X-fighters World Tour is hosted in the capital for the very first time, after previously being hosted in Dubai. Expect a knock-out tournament, with the riders with the highest scores qualifying onwards to the quarter finals, semi finals and final.

The event sees some of the world’s best freestyle motocross riders perform a number of tricks, flips and jumps on a specially built course along the Corniche.

Soon you will see a sky full of #fmx bikes. #xfighters Abu Dhabi is near. Need tickets? https://t.co/iFoFYIvlCP pic.twitter.com/PQN2B75KmQ

The track, which has being built in ten days, will use over 400 truck loads of dirt once it is fully completed. The below images show a more finished looking course that will include four kickers, two super kickers and two quarter pipes for riders to launch themselves off of.

Currently French rider Tom Pagès and Aussie Clinton Moore are both tied in the lead with 280 championship points, meaning that the title and bragging rights are all still very much up for grabs. Tickets are on sale now and the live broadcast will also be shown on redbullxfighters.com.

News
Outdoor
Sport & Fitness
Things to do
EDITOR’S PICKS
UAE holiday dates announced for Eid Al Adha
READ MORE
Another update: Emirates extends suspension of flights from India to UAE
READ MORE
Coming soon: Everything we know about Ain Dubai so far
READ MORE
Khorfakkan set to open new tourist attraction 580 metres above sea level
READ MORE
MOST POPULAR
It's Dhs350 to brunch, stay and play at the What's On Lock In this weekend
6 great things to do in Abu Dhabi this week: July 25 to 28
6 fun things to do in Dubai this week: July 25 to 28
10 of the most expensive properties for sale in Dubai right now
UAE results: Sotrovimab 100 per cent effective in preventing Covid death
YOU SHOULD CHECK OUT
Our website uses cookies and other similar technologies to improve our site and your online experience. By continuing to use our website you consent to cookies being used. Read our privacy policy here.