Thunderstorms and rain in Dubai today and tomorrow

Expect wet weather over the next few days, as well as thunderous skies.

It’s raining across the UAE again this morning, and both the National Centre of Meteorology and Accuweather.com are predicting thunder in Dubai and the rest of the emirates both today and tomorrow.

Here’s a satellite image showing the rain in the skies as of 6am (that large green and blue patch is rain, while the small spots of yellow are heavy rain): 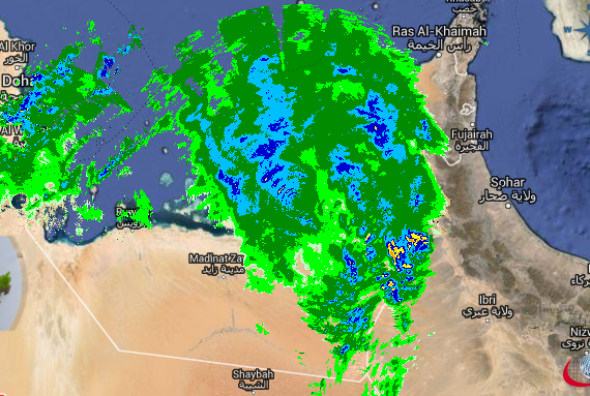 To put the current rain into perspective, here’s a satellite image from 9am on Wednesday March 9, the day of the very heavy rains in Dubai:

According to Accuweather.com’s hourly report, the rain will stop for a while at 7am, but will return to the Dubai skies at 9am and 2pm, accompanied by thunderstorms.

The weather service also predicts rain in Dubai and thunderstorms late at night on Tuesday, as well as early Wednesday morning. It’s predicting sunshine from Thursday, however.

The National Centre for Meterology has indicated that the humidity in the UAE will reach 95 per cent in internal areas today, and 90 per cent in coastal areas.

Here’s a bit of their forecast for today’s weather:

“Unstable weather, cloudy over most areas, where the amount of clouds will increase over scattered areas of the country including some towering clouds, with rainfall of different intensities. Moderate to fresh winds in general, being strong at times with clouds activity, causing blowing dust/sand over the exposed areas and poor visibility at times, with a drop in temperatures.”

We’ll keep you updated on the roads and the rain, but in the meantime, drive safely and carefully on your way to work.

Here’s what the Dubai Municipality have been up to today to keep the roads unclogged:

Here are some social pics and videos of the rain today so far:

The rain sure knows how to put one in a mood. #dubai pic.twitter.com/yTFExVVvzd

I still remember how the rain excites me back home! #nocar #nofilter #mycity #mydubai

Here’s the traffic as of 9.30am this morning – remember, the darker the red, the worse the jam: 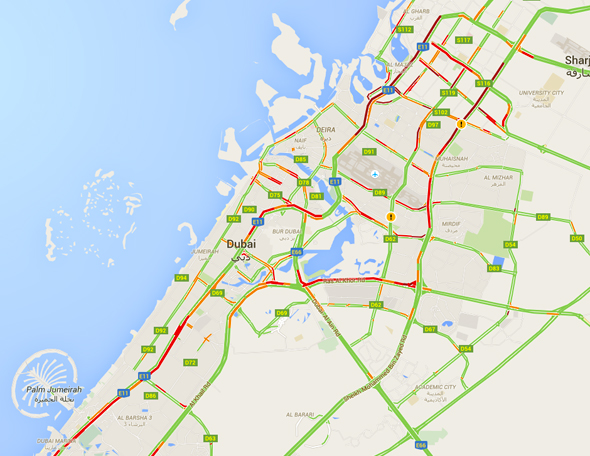 @mkdubai the Gardens/Discovery Gardens is like a drained swimming pool. It’s insane how quickly it fills.

No signals working at the big roundabout at DIP/yalayis @trafficdxb

And here’s some advice from the RTA on how to drive during the rain in Dubai:

Remember, ensure the efficiency of the wipers and devices to help you to see a clear road during the rain. #DriveSafely