Extreme sports just got even more extreme in the capital.

If you thought the UAE had enough leisure outlets already, you were wrong.

CLYMB, a Dhs367 million indoor attraction is set to be developed on Yas Island by 2018, and it’s not your average leisure centre. In fact, two of its attractions will break world records.

Fans of extreme sports will be glad to hear that CLYMB will feature not only the world’s largest flight chamber, but the world’s tallest indoor climbing wall as well.

If you’re unsure as to what a flight chamber is, it’s one of those wind tunnels where visitors are able to don boiler suits and mimic the action of skydiving.

The flight chamber spans 9.75 metres, making it the widest in the world.

The indoor climbing wall is also a global record-breaker, standing at a height of 43 metres.

That’s the length of 22 camels stacked on top of each other. 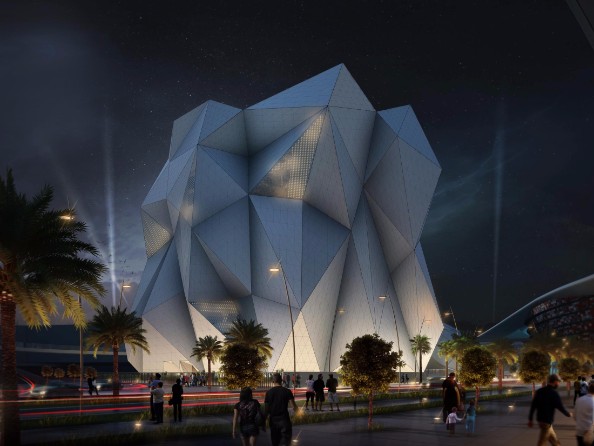 Clymb’s exterior, looking like something straight out of a space movie.

The climbing section will offer spaces for beginner, intermediate and expert climbers over four walls of varying difficulty.

Only the expert wall will span the full 43 metres though.

If hovering in a tube or scaling a wall isn’t your thing, then you can park yourself among a bundle of retail, food and beverage outlets, or one of CLYMB’s party spaces.

CLYMB will also be linked to Yas Mall, so once you’re done being extreme you can pop over to the shops.

HOW MUCH HAS BEEN BUILT?

Well, as of October, project development progress has reached around 35 per cent, with an expected completion date of some time in 2018.

Mohammad Abdullah Al Zaabi, CEO of CLYMB’s developer Miral, said: “This announcement endorses our continuous commitment at Miral to develop and create leading destinations with the highest global standards on Yas Island that offer unique immersive and exciting experiences to everyone.”

News
Outdoor
Sport & Fitness
Things to do
EDITOR’S PICKS
UAE holiday dates announced for National Day
READ MORE
Emirates Dubai 7s is back: Here's why we're excited...
READ MORE
Tennis ace Andy Murray to play at Mubadala World Tennis Championship
READ MORE
UAE 50: Where to watch National Day fireworks in Dubai
READ MORE
MOST POPULAR
UAE confirms its first case of the Omicron variant
Alhosn Green Pass to only be valid for 14 days after negative PCR
20 of the best things to do in Abu Dhabi this long weekend: Part 2
First look: London-loved restaurant The Cinnamon Club opens in Dubai
Check out this amazing display at the world's highest outdoor infinity pool
YOU SHOULD CHECK OUT
Our website uses cookies and other similar technologies to improve our site and your online experience. By continuing to use our website you consent to cookies being used. Read our privacy policy here.