Planning to get out and see the fireworks this weekend? Well, read this before you leave the house…

And whether you’re planning to celebrate with a swanky dinner, by gawping at the fireworks, or even just grabbing some snacks from the supermarket and curling up with Netflix, chances are you’ll be leaving the house at some point on December 31.

So whether that’s via the roads or public transport, you’ll need to be aware of all the closures and timings set for the night’s festivities.

READ MORE
*Want to party with Lindsay Lohan this NYE? Here’s how…*
*27 things to do over the next week in Dubai*
*20 chilled out dinners and parties to book for this NYE*

With millions of revellers expected to descend on Dubai this year, the RTA have come up with a comprehensive plan to try and ease congestion (but be warned, it’ll still be crazy busy out there so leave plenty of time to get to where you need to be).

So with no further ado, here’s everything you need to know… 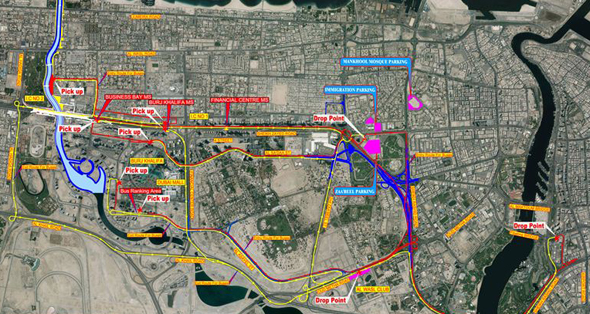 The RTA’s plan focuses in particular on the area around the Burj Khalifa, where some pretty spectacular fireworks will kick off when the clock strikes midnight.

Here are the closures to be aware of:

– Mohammed bin Rashid Boulevard will be shut from 6pm or 8pm depending on traffic flow.
– The upper and lower decks of Financial Centre Road will be closed at 8pm.
– The closure of Al Saada Road will happen in these stages: Al Murooj Rotana intersection leading to Burj Khalifa and tunnel shuts at 6pm, the Zabeel intersection shuts at 8pm, and Emirates Towers roundabout leading to Al Saada Road shuts at 10pm.
– Al Asayel Road will close at 4pm (it will be used for public transport and VIP passage).
– Al Sukook Road will close at 8pm.

As well as road closures, there’ll be some diversions in place too (with plenty of signage, so you shouldn’t get too confused).

“Traffic will be guided to multiple directions including Oud Metha Road, Al Asayel Road, Zabeel bridges, Al Saada Road, and internal roads at the Business Bay area to access Sheikh Zayed Road and Al Khail Road in order to ease the pressure on the Financial Center Road,” the RTA said.

There’ll be around 17,000 car parks provided at the lots of Dubai Mall and surrounding areas, and 5,000 parking spots outside the events area.

There’ll also be 2,000 spaces at Al Wasl Club, 1,500 at Musalla (Mankhool) at Trade Centre, 500 at the Department of Residency and Foreigners Affairs in Jafiliya, and 1,000 at Zabeel Park.

The RTA will put on shuttle buses at all these car parks to take drivers to the events area.

On the plus side, after the NYE rush on the roads, all parking in Dubai (except the fish market parking lot and the multi-level parking terminal) will be free on January 1.

Don’t fancy driving on December 31? Well, there are plenty of other options – and here’s the breakdown.

There’ll be an additional 160 buses put on to feed metro stations and alternative parking spaces, in addition to existing services. They are as follows:

About 22,000 passengers alone are expected to uses the buses between 12.30am and 4am (wowza). For more about timings of the regular bus services, visit rta.ae. 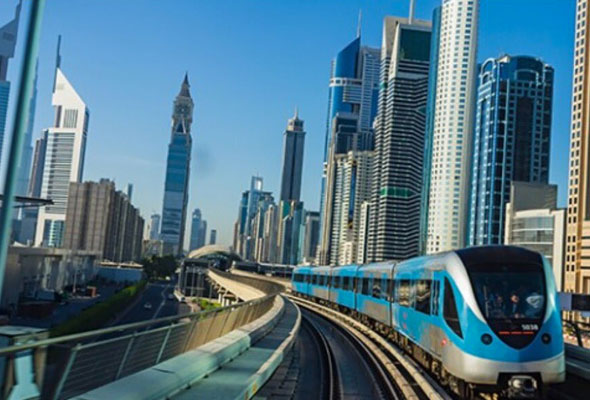 Nearly 1.5 million passengers are expected to use the Dubai Metro between December 31 and January 1 – so put it this way, don’t expect a seat.

The frequency of trains will range from 2.38 minutes to 8 minutes, with services kicking off on the red line from 5.30am on Saturday to midnight the following day.

On the green line, trains will start at 5.50am on Saturday through to midnight on Sunday December 1 – and remember, the Burj Khalifa metro station will be closed from 10pm on the 31st to 6am on the 1st.

The tram, taxis and canal ferries

Services will start from 6.30am on December 31 until midnight, and the January 1 service will run from 12.01am until 1am on January 2.

If you’d rather travel by water, be warned that there’ll be no boats on the Dubai Canal rom Jumeirah Road to Ras Al Khor between 10pm on December 31 to 6am on January 1.

The walkway over the canal on Sheikh Zayed Road will also be shut.

News
Transport
EDITOR’S PICKS
So, when is the next UAE public holiday in 2021?
READ MORE
All of the lavish new hotels set to open in Dubai in 2021
READ MORE
16 of the best pool passes in Dubai that are fully redeemable
READ MORE
All of the restaurants at West Beach, Palm Jumeirah
READ MORE
MOST POPULAR
NCEMA: Additional supportive dose of Sinopharm is now available
UAE should be off UK red list 'very soon' says chairman of Emirates
Abu Dhabi gets a restaurant dedicated to the love of Udon
Flash sale: 50 percent off staycations at this luxe Palm Jumeirah hotel
How you can help the EAD protect Al Wathba Fossil Dunes
YOU SHOULD CHECK OUT
Our website uses cookies and other similar technologies to improve our site and your online experience. By continuing to use our website you consent to cookies being used. Read our privacy policy here.