An architecture firm wants to build a hovering tower in Dubai

Could the world’s (or rather universe’s) craziest tower be built in Dubai?

It would be the world’s tallest tower (by a long shot). The only way to leave it would be by parachute. And it would orbit the earth entirely in 24 hours.

Yes, this is an actual proposal for a building: innovative architecture firm Clouds AO has put out plans for an out-of-this-world flying tower called the Analemma that would be suspended to an asteroid hovering over earth by high strength cables.

Why do we care about it? Well, the New York firm has proposed that the building be constructed in Dubai – due to the fact that the emirate is a specialist in constructing super-tall structures (and manages to do so at one-fifth of the cost of cities like New York). 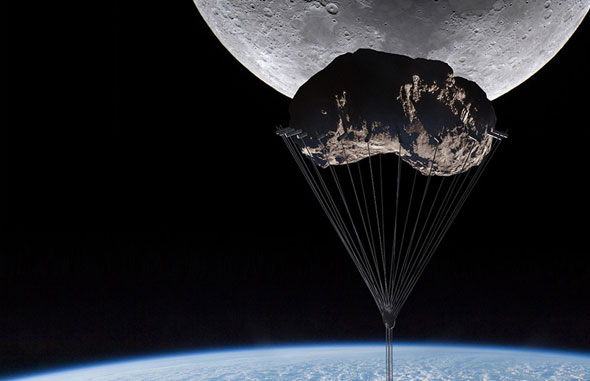 If would orbit earth once in a 24 hour cycle, and if you wanted to leave the building and go back down to earth you’d have to do so by parachute (in some sort of vehicle, of course).

The Analemma tower would be split into many sections – with sleeping quarters, business floors, a gardening and agriculture centre, transfer stations to bring goods to and from earth, and of course dining, shopping and entertainment areas.

The two highest parts of the tower – from 17,000 to 20,000 metres above earth would be exclusively used for both funeral services and as a space for religious relics to be housed. 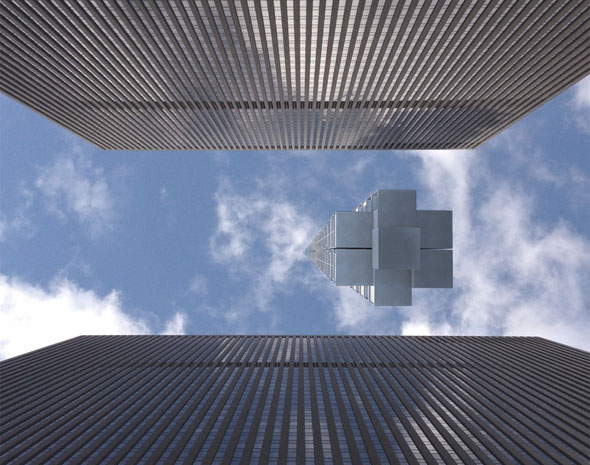 What the hovering tower would look like from the ground.

The exact height of the Analemma hasn’t yet been discussed, but it would hover at 32,000 metres above sea level (and would start not that far off the ground). So yes, it looks like it would be at least 20,000 metres (the Burj Khalifa is 828 metres tall).

“By placing a large asteroid into orbit over earth, a high-strength cable can be lowered towards the service of earth from which a super tall tower can be suspended,” the firm notes on their website. “Since this new tower typology is suspended in the air, it can be constructed anywhere in the world and transported to its final location.” 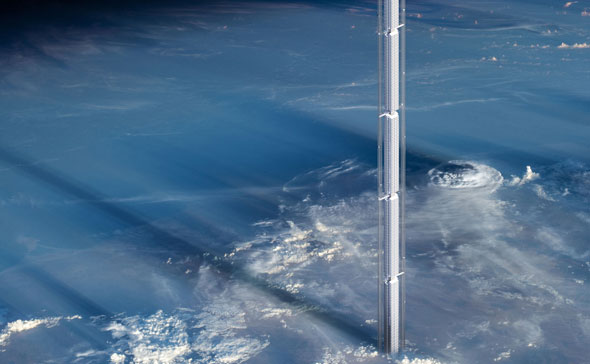 A glimpse of the tower from space

The firm notes on its website that there are benefits and drawbacks to being up so high in the sky: “For example, while there may be a benefit to having 45 extra minutes of daylight at an elevation of 32,000 meters, the near vacuum and -40°C temperature would prevent people from going outside without a protective suit. Then again, astronauts have continually occupied the space station for decades, so perhaps it’s not so bad.”

So yes, this is all very pie in the sky and conceptual right now. And if it does happen we imagine it will follow more of a UAE’s city on Mars by 2117 timeline than be a 2020 project.

But who knows what the future has in store…

Here’s a (very long) diagram to show you the structure of the tower:

Culture
EDITOR’S PICKS
Ain Dubai will open with fireworks, live music and a drone show
READ MORE
Incredible Aura SkyPool to open in Palm Tower this November
READ MORE
Brit Grand Slam hero Emma Raducanu confirmed for Mubadala Tennis
READ MORE
What’s On Nightlife Awards 2021: Here are the nominees...
READ MORE
MOST POPULAR
Review: Niri Restaurant and Bar, Mamsha Al Saadiyat
Harlem Globetrotters are coming to Expo 2020 Dubai this October
New venue Urla brings coastal dining to the heart of Downtown Dubai
The Dubai Moonlight Classic is bringing carnival vibes to the city
6 cool things to do in Abu Dhabi this week: October 24 to 27
YOU SHOULD CHECK OUT
Our website uses cookies and other similar technologies to improve our site and your online experience. By continuing to use our website you consent to cookies being used. Read our privacy policy here.