An environmentally-friendly alternative to the current petrol-powered boats…

One of the more fun things to do when visiting the cultural melting pot that is Global Village is to take a ride along its man-made water canal in an abra.

Designed to mimic the experience that can be had when crossing the Dubai creek between Deira and Bur Dubai it has proven to be popular with visitors.

Traditionally though, these passenger boats have been petrol-powered which, let’s face it, is both not great for the environment and gives off an unpleasant smell. So, in an effort to clean things up a little, the RTA has announced that it will be working closely with the management of Global Village to roll out several all-electric abras as an eco-friendly alternative. 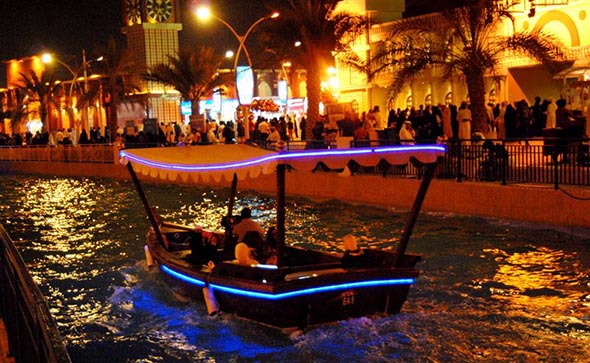 Mansour Al Falasi, Director of Marine Transport at the RTA said in an official statement: “The growing popularity of the Abra service contributes to the growth of tourist numbers in the Global Village. The RTA is keen on taking part in the annual event, which runs for about five months. The service is part of our vision to generate a positive experience to this annual event by availing riders an opportunity to board a transit means powered by renewable energy,”

The new initiative falls into the RTA’s ‘Safe & Smooth Transport for All’ roadmap, with Al Falasi noting that the new abras will follow a “heritage-inspired” design to help maintain a traditional look.

Transport
EDITOR’S PICKS
Covid-19 rules in Dubai: all the updates you need to be aware of
READ MORE
9 royal-approved Dubai restaurants
READ MORE
16 of the best beach bars in Dubai for sundowners
READ MORE
Where to get the Covid-19 vaccine in Dubai, Abu Dhabi and across the UAE
READ MORE
MOST POPULAR
Department of Health approves three new rapid Covid-19 tests
Save up to 90 per cent at malls in Dubai this weekend
Atlantis, The Palm relaunches underwater yoga classes
6 fun things to do in Abu Dhabi this week: January 24 to 27
New dates for Britain's Got Talent's hilarious improv troupe announced
YOU SHOULD CHECK OUT
Our website uses cookies and other similar technologies to improve our site and your online experience. By continuing to use our website you consent to cookies being used. Read our privacy policy here.