Comedian Dave Chappelle to perform in Dubai next month

Famed for his big, brash brand of comedy, actor and comedian Dave Chappelle is set to make his return to the UAE next month. The legendary funnyman will take to the stage at the Dubai World Trade Centre for a stand-up show on Tuesday November 20.

Tickets for the gig will go on sale at midday tomorrow, with prices starting from Dhs295.

With an impressive career spanning more than 30 years, his return to the UAE comes a year after the comedian released four stand-up specials on Netflix to huge success. He’s since won two television Emmy Awards, a Grammy and the Pollstar’s Comedy Tour of the Year Award. 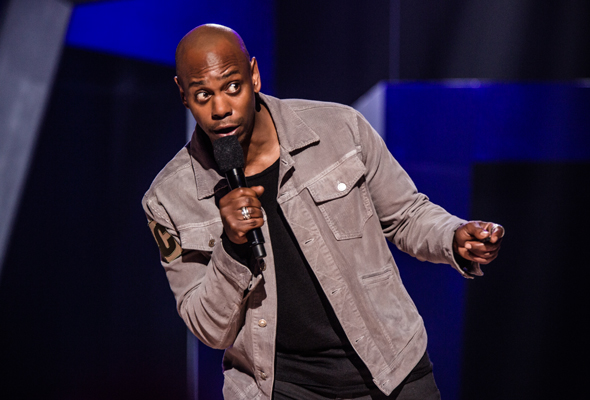 As well as his stand-up comedy, Chapelle has also made a name for himself in Hollywood, appearing in hits such as Robin Hood: Men in Tights, The Nutty Professor, and the recently-released blockbuster remake of A Star is Born.

Culture
Theatre
EDITOR’S PICKS
Ain Dubai will open with fireworks, live music and a drone show
READ MORE
Incredible Aura SkyPool to open in Palm Tower this November
READ MORE
Brit Grand Slam hero Emma Raducanu confirmed for Mubadala Tennis
READ MORE
What’s On Nightlife Awards 2021: Here are the nominees...
READ MORE
MOST POPULAR
This gorgeous new padel and wellness club is hidden in Al Quoz
Bar of the month: Ray's Bar, Conrad Abu Dhabi Etihad Towers
DIFC Art Nights is returning in November for the second time this year
10 of the best Halloween brunches to book in Dubai
Sheikh Hamdan has been spotted dining at DIFC's newest restaurant
YOU SHOULD CHECK OUT
Our website uses cookies and other similar technologies to improve our site and your online experience. By continuing to use our website you consent to cookies being used. Read our privacy policy here.