The company will begin operating in April 2019…

Dubai’s Roads and Transport Authority (RTA) has announced that it is launching a new e-hail taxi service with ride-hailing app Careem.

The service will be rolled out to the public in April 2019 with almost 11,000 taxis run to begin with by the new company.

Through the new company, users will be able to book RTA taxis through an online booking, with the aim of reducing the expected waiting time for a taxi, as well as allowing direct payments to be made online, charting the quickest journey route and allowing users to fare split. 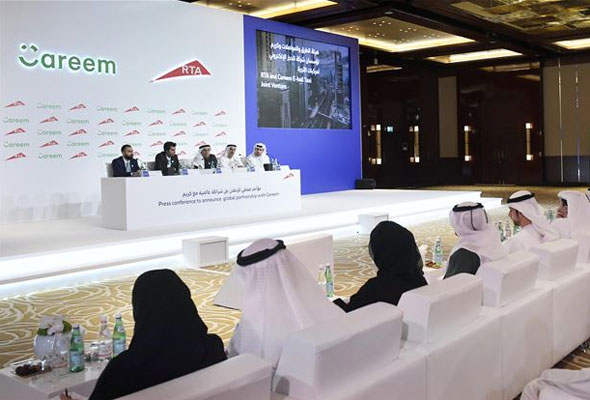 The RTA has said that it is the first partnership in the world between a government transport authority and the private sector.

A company name and logo will be revealed in the coming months.

“This initiative stems from RTA’s keenness to implement the directives of HH Sheikh Mohammed bin Rashid Al Maktoum, Vice-President and Prime Minister of the UAE and Ruler of Dubai, to transform Dubai into the smartest city in the world. It also aims to bring happiness to people, deliver classy services to tourists and enrich customers’ experience,” said RTA Director General HE Mattar Al Tayer.

The RTA says that customers will still be able to hail taxis in the street.

Minimum fares and the pricing structure of the new taxi company are still yet to be announced.

News
EDITOR’S PICKS
UAE holiday dates announced for Eid Al Adha
READ MORE
Emirates extends suspension of flights from India to UAE again
READ MORE
Coming soon: Everything we know about Ain Dubai so far
READ MORE
Khorfakkan set to open new tourist attraction 580 metres above sea level
READ MORE
MOST POPULAR
A cool new hotel is opening in Jumeirah Village Circle in September
Resident returning to the UAE? Here's the approval form
WizzAir Abu Dhabi will start flying to Italy with fares from Dhs129
Get two-for-one on Friday brunch at this popular Dubai pub
Spend the summer at this awesome new Surf Shack pop-up
YOU SHOULD CHECK OUT
Our website uses cookies and other similar technologies to improve our site and your online experience. By continuing to use our website you consent to cookies being used. Read our privacy policy here.