Is Gordon Ramsay’s new restaurant really the hottest in town?

Not content to have just one restaurant in Dubai, Gordon Ramsay has opened Hell’s Kitchen – named after his hit TV Show where chefs face-off to prove themselves to the master – at Caesars Palace on Bluewaters Island.

The first Hell’s Kitchen is located in the heart of Vegas, and has been celebrating a roaring trade ever since it opened earlier in 2018. Similarly, Bread St Kitchen at Atlantis, The Palm is almost always full, lined with tourists desperate to sample a taste of Ramsay’s signature style. So can the animated chef emulate his success on Bluewaters island? We make the trip across the bridge to try it out.

Made to feel like you’re in an actual episode of Hell’s Kitchen – minus, thankfully, ongoing competition between warring chefs – the high-ceilinged space inside Caesars Palace is sleek and shiny, with a slight Art Deco feel and plenty of the show’s signature pitchforks hidden throughout (including in the light fixtures hanging from the ceiling). The red-and-blue open kitchen is the dramatic centerpiece of the restaurant, and while promotional materials claim that it will make guests “feel like they are on the studio set,” it thankfully isn’t overly distracting. 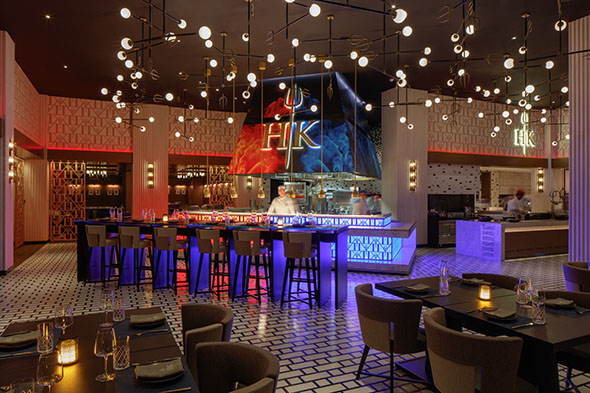 Avid fans of the show will recognise that many dishes on the menu are some of the items that contestants had to create on the series such as the pan seared scallops, lobster risotto, beef Wellington, and sticky toffee pudding.

We dive straight in with the lobster risotto (Dhs135) served with an enormous butter-poached tail on a bed of piping hot saffron-infused risotto. It was creamy and piquant while the tender lobster helped make the dish feel meatier. Meanwhile, the rack of lamb (Dhs210) was a hearty, homely gastropub dish, excellent in its simplicity because of the top quality of the meat, with its slightly gamy edge. 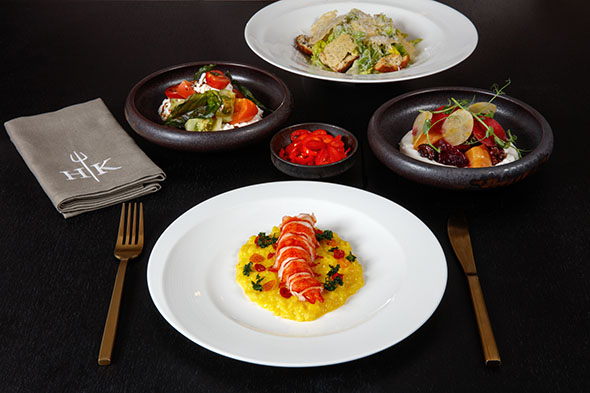 Similarly, the braised short rib (Dhs165) was delicious (if maybe too heavy to eat alongside the lamb). The dish we cooed about the most was hidden among the side dishes: the baked macaroni and cheese was comfort food-turned-tour de force, with the smoldering intensity of smoked Gouda creating a deliciously thick lava of salty fondue.

For dessert, we chose another Ramsay classic, the sticky toffee pudding (Dhs60) topped with a scoop of speculoos ice cream. The cake was warm, soft, and bursting with comforting flavours of brown sugar and vanilla, and the cold speculoos ice cream on top took the decadence over the edge. 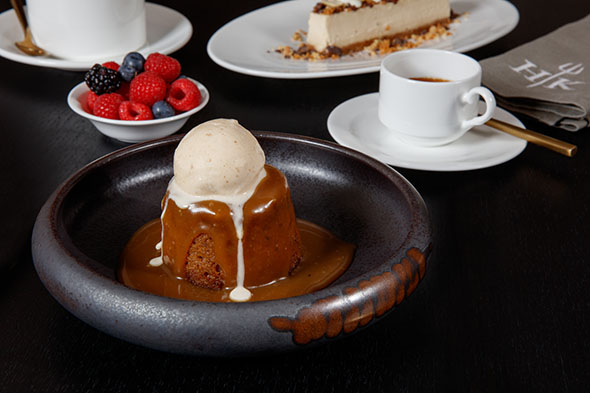 Overall, a thoroughly enjoyable – and over-indulgent – Hell’s Kitchen experience. The restaurant could easily coast by on its namesake brand, but the attention-to-detail, excellent service and quality dishes prove that this team is hell-bent on being more than just a themed restaurant.

Eat & Drink
EDITOR’S PICKS
Ain Dubai will open with fireworks, live music and a drone show
READ MORE
Incredible Aura SkyPool to open in Palm Tower this November
READ MORE
Brit Grand Slam hero Emma Raducanu confirmed for Mubadala Tennis
READ MORE
What’s On Nightlife Awards 2021: Here are the nominees...
READ MORE
MOST POPULAR
Why Armani/Hashi is trending hard on the Japanese cuisine scene
Celebrate creativity at City Walk during this three-weekend event
This Heinz Beck brunch at Waldorf Astoria just got an upgrade
10 brilliant things to do in Abu Dhabi this long weekend: Oct 21 to 23
Experience Arabesque elegance at Asil's Saturday lunch
YOU SHOULD CHECK OUT
Our website uses cookies and other similar technologies to improve our site and your online experience. By continuing to use our website you consent to cookies being used. Read our privacy policy here.