Five galleries you simply cannot afford to miss this month

SAMIA HALABY: FIVE DECADES OF PAINTING AND INNOVATION
Career-long retrospective of the Palestinian-born, US-based artist. A leading proponent of abstraction, Halaby is known for her bold use of colour and vivid brushwork, which is strongly rooted in Islamic art. This exhibition features 50 of her works, including sculpture and computer-generated kinetic works. A rather splendid overview of a brilliant career that is supported by a hefty and impressively illustrated publication of the same name. 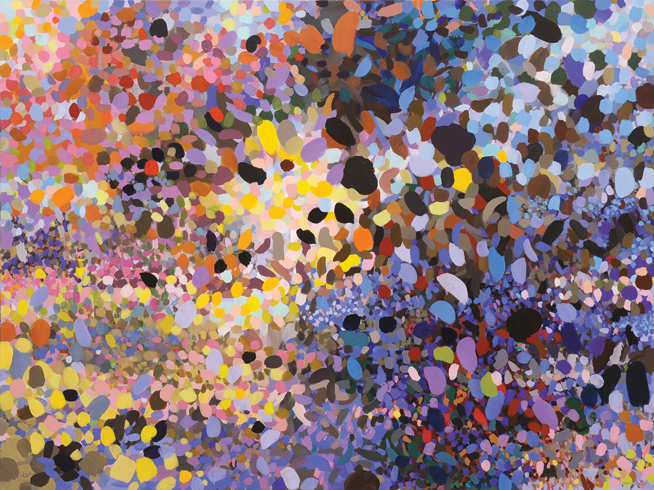 LANGUAGE ARTS
This is the first UAE outing for Slavs And Tatars, an acclaimed international collective of artists devoted to the art, culture and history of “an area east of the Berlin Wall and west of the Great Wall of China” – a not-entirely modest geographical mass that includes our beloved Middle East. This show opens in parallel with the group’s debut at Art Dubai and looks at the use of language in visual arts – a key theme within their practice. This clever swathe of artists has exhibited to international acclaim everywhere from London’s Frieze Art Fair to MoMA in New York. Now it’s our turn. 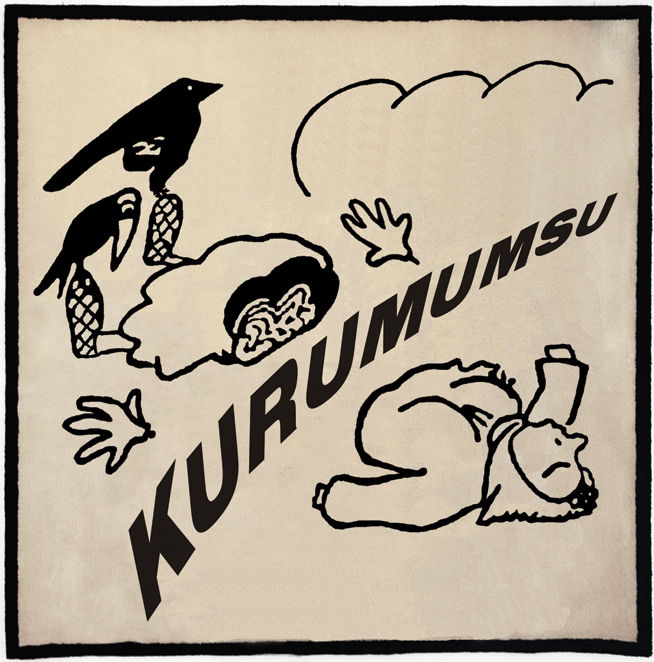 HAPPY LUCKY
There’s a hint of 1990s dance culture and a dash of pop art in the smiley faces of Robert Hammond’s art. But there’s something beyond the surface of these shiny shapes, made up of  layer of metal, glass and acrylic. Look closely and you’ll see they’re not so simple after all. 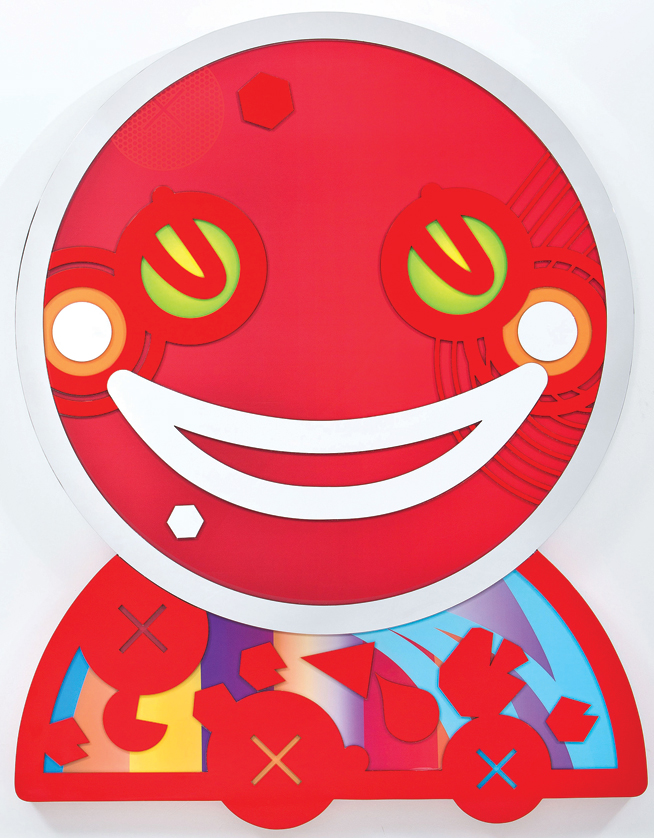 32nd ANNUAL EXHIBITION OF EMIRATES FINE ARTS SOCIETY
Subtitled Stories Yet To Be Told, this annual outing from Sharjah’s Emirates Fine Art Society reveals the rich culture of the Emirates’ art. One of the highlights is local art hero Ebistam AbdulAziz’s latest series, My Phone Diary, which explores her on-going quest for alternative ways to record her life and experiences. Featuring 40 drawings rendered in fluorescent paint and with an audio accompaniment, Ebistam’s definitely still on track. 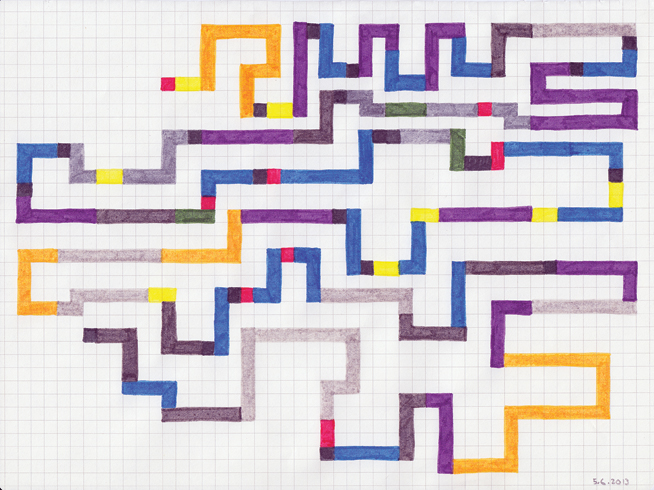 CRAZY EARTH, THE ART WAY
Swedish artist Peter Sköld served as a UN peacekeeper in the Bosnian War, sustaining an injury that deprived him of feeling in his painting arm. Forcing himself to adapt, Sköld developed a method of dripping paint on to surfaces from above. The results form a new exhibition, Crazy Earth, The Art Way, at Fairmont Bab Al Bahr, Abu Dhabi. He explains how art helped him to heal:

“Crazy Earth, The Art Way is based on my experience in the Bosnian War, and more recent events in my life. During my second tour of duty in Bosnia, I was captured as a prisoner of war and faced torture on a daily basis. I later sustained the injury that severed feeling in my right arm.

“When I heard I would not regain feeling, I felt anger, confusion and loss. This was combined with images of innocent women and children, and villages being ransacked. I felt hopeless. 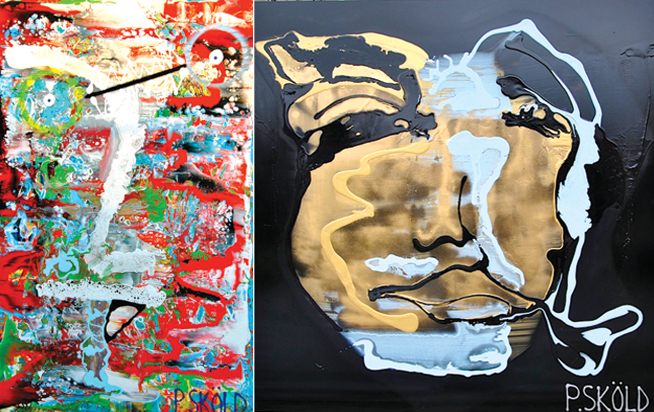 “When I returned to Sweden, there was no infrastructure to deal with war veterans. Unlike other European countries, war is not deeply rooted in our history, and the returning members of my company did not have a support network. Of the 30 who returned, 12 took their own lives.

“I was in an abyss and saved myself by retreating into painting. I shut myself in the cellar for hours, even days, at a time, hashing out emotions on canvas. My work was dark at that time, with a lot of brown and grey hues. My wife chided me for this and asked if these were the only colours at the store.

“My art was therapy that helped ease me back into everyday life. Later it became an expression of happiness when my wife became pregnant with our first child. My work took off after that, with lighter, more humorous themes. Crazy Earth, The Art Way tells a compelling narrative of hope and the randomness of chance encounters.”

Art
Culture
News
Things to do
EDITOR’S PICKS
UAE holiday dates announced for Eid Al Adha
READ MORE
Emirates extends suspension of flights from India to UAE again
READ MORE
Coming soon: Everything we know about Ain Dubai so far
READ MORE
Khorfakkan set to open new tourist attraction 580 metres above sea level
READ MORE
MOST POPULAR
It's Dhs350 to brunch, stay and play at the What's On Lock In this weekend
UAE weather: Temps of over 50ºC recorded in the shade yesterday
Get a free Expo 2020 day pass when you fly with Emirates
A popular fairy-tale is gracing the stage at The Theatre at Mall of the Emirates in August
UAE petrol prices will increase again in August 2021
Exclusive interview: John Cena on his role as a 'douchey Captain America'
YOU SHOULD CHECK OUT
Our website uses cookies and other similar technologies to improve our site and your online experience. By continuing to use our website you consent to cookies being used. Read our privacy policy here.