Best road trips in the UAE

Want to know more about the nation’s capital? Get behind the wheel and visit these spots, where you’ll find history mingled with modern charm, beautiful desert vistas, archaeological wonders and roaming animals.


How far: Roughly 170km from Abu Dhabi in Al Ain.
Drive and destination: If you like scenic views, a steady climb that rises 1,240 metres, craggy limestone that’s lasted millions of years, and access to the UAE’s second highest peak, this is the drive for you. Jebel Hafeet has been described as ‘among the world’s greatest driving roads’. At the top, you can look out over Al Ain and foothills where some 500 ancient burial tombs have been discovered. To relax, head back down to the base of Jebel Hafeet to the Green Mubazzarah park (ten minutes from Al Ain Zoo). There you’ll find hot water springs which locals argue have therapeutic qualities.
Where to stay: Located near Sheikh Zayed Palace and Al Ain Oasis, Al Ain Rotana Hotel provides the perfect retreat after a day of driving and hot springs. 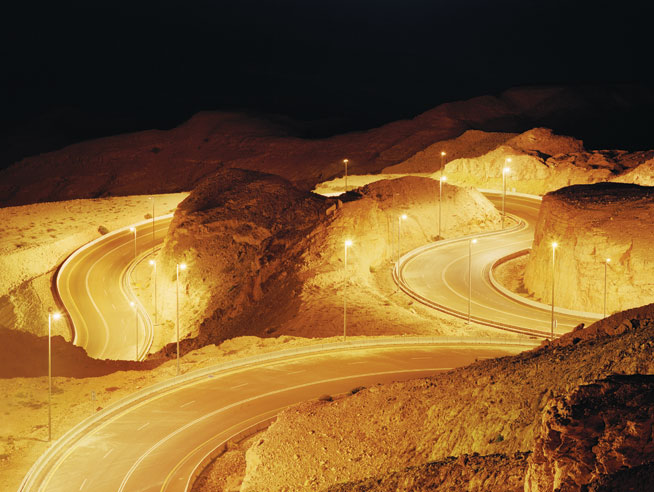 
How far: Twenty-two nautical miles off the coast of Abu Dhabi, with ferries leaving from Jebel Dhanna and Dalma Island Port.
Drive and destination: Forget traditional road trips. With Dalma Island, a historical spot off the edge of Abu Dhabi, cars are swapped for a ride on a ferry. Get ready for a journey on either Yameela or Al Gharbia (the names of the two ferries). As you ride, enjoy stunning ocean views. When you reach Dalma Island, expect heaps of history. Dalma has been inhabited for over 7,000 years and was once a key pearl diving centre. Today the island is home to under 5,000 people, with an intimate atmosphere, a quiet air, and refreshingly clean beaches.
Where to stay: While Dalma Island does have one hotel (Dalma Motel), the place is in serious need of renovation. Stay instead at the luxurious Danat Jebel Dhana Resort. 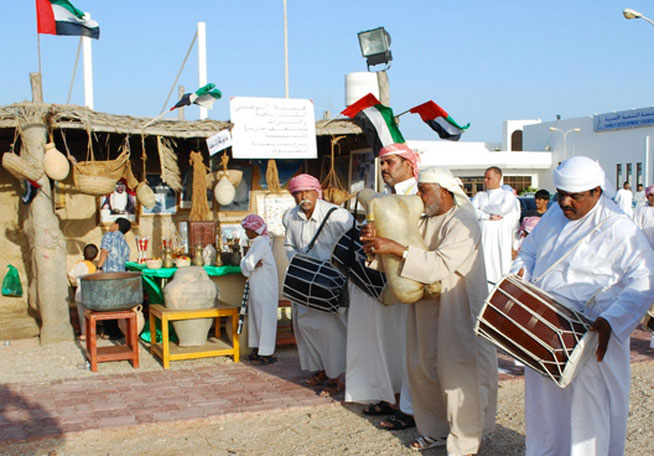 How far: About 220km southwest from Abu Dhabi, on the edge of the Empty Quarter desert.
Drive and destination: Take the E11 towards the Empty Quarter. Depending on which exit you take (it’s common to take the second exit to Madinat Zayed), you’re likely to drive on through the emirate’s oil fields. You’ll be greeted by undulating dunes, sweeping sand, and the temptation of a detour to the en route Emirates National Automobile Museum. Liwa Oasis itself is the birthplace of Abu Dhabi royal family. It’s home to date farms, camel racing, salt flats, and the impressive Moreeb Dune.
Where to stay: The Qasr Al Sarab Desert Resort by Anantara has a luxury property in this desert location. 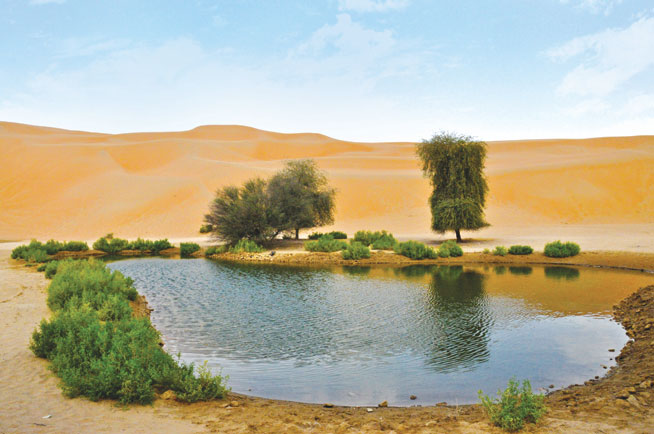 How far: Located on the western side of Abu Dhabi and roughly 160km away, it’s easy enough to get to Al Gharbia from Abu Dhabi’s international airport.
Drive and destination: Home to 83 per cent of Abu Dhabi’s landmass, Al Gharbia stretches as far as the eye can see – and then goes a bit farther. Sparsely populated, and located between the Empty Quarter and the Arabian Gulf, the region offers up some of the UAE’s rarest wildlife and striking natural beauty. Within the region’s seven cities, you’ll also find a range of cultural activities that play on the desert’s history with traditional Arabic experiences. Looming above it all will be some of the tallest sand dunes in the world. Plan your timing right and you could attend a falconry festival or the Liwa Date Festival.
Where to stay: Make the most of Al Gharbia’s rustic charm with a private villa surrounded by desert and water. Stay at Anantara Sir Bani Yas Island Al Sahel Villa Resort, which has 30 villas surrounded by natural beauty and free-roaming animals. 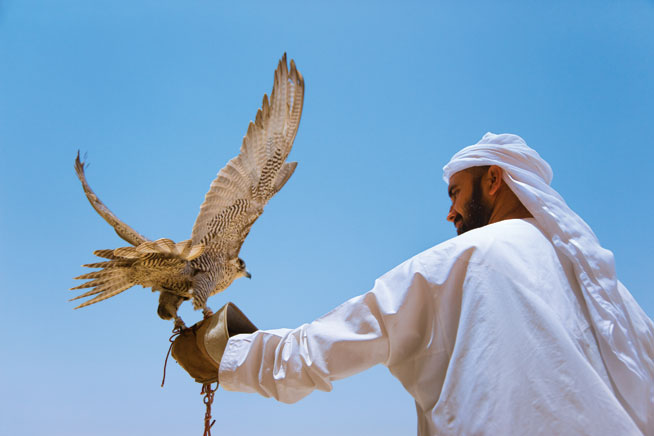 How far: About 160km from Abu Dhabi, located in the Al Ain Sportplex near the Hilton Hotel.
Drive and destination: If you like your road trips to end with a bit of enjoyable work and culture, head on out to Al Reef Handicrafts Training Centre. This educational venue allows you to dive into the art of making traditional handicrafts. Separated by age and interest, the classes suit both the young and young at heart. Options on offer include basket making, embroidery, textile weaving, and more. You can even satisfy that shopping bug by buying crafts from some of the Emirati women that make them.
Where to stay: You can’t get much closer to the centre than Hilton Al Ain with its French balconies with pool, mountain, or garden views, and three good sized swimming pools to dive into. 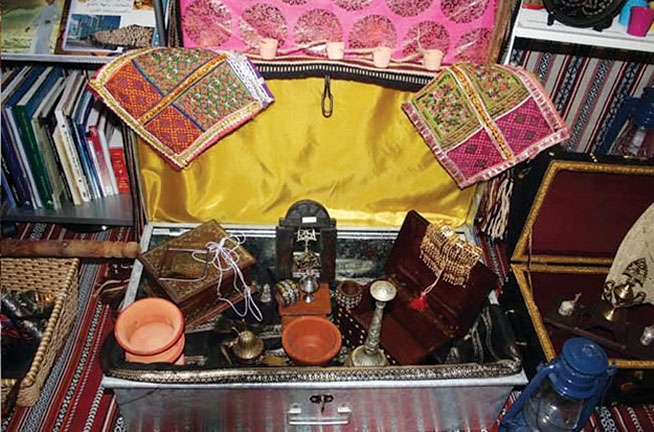 How far: Around 150km from Abu Dhabi. Located on Al Jimi Street, the fort is a few miles northwest of Al Ain city centre.
Drive and destination: Drive through Al Ain, Abu Dhabi’s garden city, and you might spot an oasis, mineral springs, and other colourful nature. The Muraijib Fort itself is on Al Jimi Street. Dating back to 1816, it’s the oldest in Al Ain. Today, three buildings make up this structure: a main fort, a smaller fort and a watchtower. Surrounding the fort are gardens great for a stroll, as well as a playground for the little ones. Take note: only women and children are allowed in the gardens.
Where to stay: The Danat Al Ain Resort has bright rooms with balconies set within a secluded garden setting. 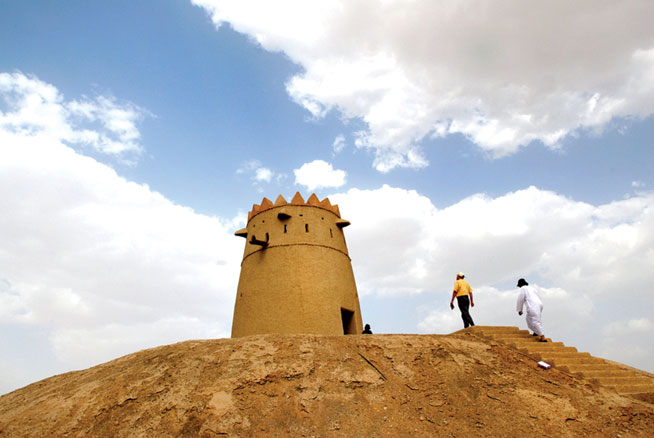 How far: About 160km from Abu Dhabi, located in the Al Ain Sportplex near the Hilton Hotel.
Drive and destination: Inside you’ll find the rather fascinating Al Ain Heritage and Culture Village. Focusing on the wealth of history and traditions of local Emirati culture, the destination educates within a theme-park setting. Expect small theatres where you can relax while listening to concerts and readings, an old café, and a market.
Where to stay: The Hili Rayhaan by Rotana is temptingly located at the centre of Al Ain – and right next to a mall, so you can combine your cultural activities with a bit of shopping. 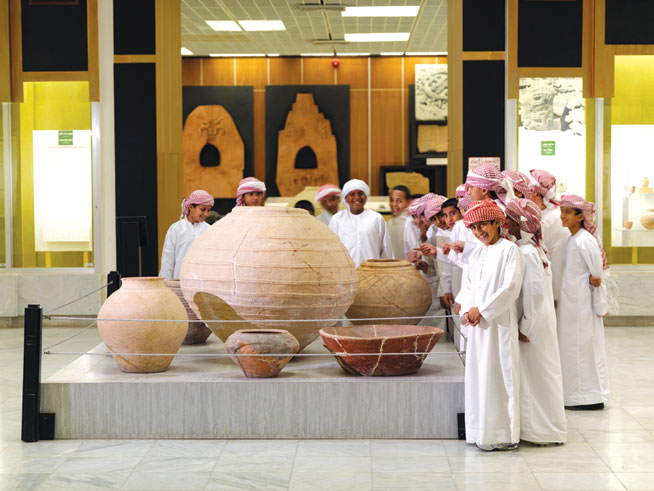 How far: 100km southwest of Abu Dhabi on Sir Bani Yas Island.
Drive and destination: Here’s one for all you history buffs out there. You’ll need to catch a boat to this natural island located near Abu Dhabi. Once on land, expect a host of nature reserves, free-roaming animals and thousands of plants. You’ll also find the Christian Monastery, discovered only in 1992 and stretching back to around 600 AD. The community is believed to have housed around 30 to 40 monks. Today treasures are still constantly being discovered, with scholars noting that until recently, they had no idea Christians came this far south and east into the Arabian Gulf. It offers the incredibly unique distinction of being the only pre-Islamic Christian site known in the UAE.
Where to stay: If you’re on the island, it’s worth staying at the Desert Island Resort and Spa by Anantara. With views of the Arabian Gulf, this luxurious property will keep you close to history and nature. 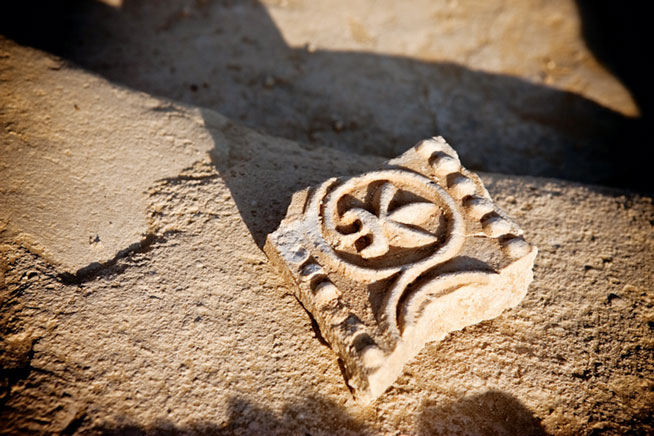 How far: Not far at all – drive to the western part of Abu Dhabi to the Al Bateen district
Drive and destination: Once a quiet fishing centre, the Al Bateen area in the nation’s capital is now rapidly developing. Within Bateen you’ll find the Zayed Centre, which operates as an homage to Sheikh Zayed, the Father Of The Nation. Inside you will find a huge photo gallery of Sheikh Zayed interacting with a string of international dignitaries and royalty. You will also find fascinating glimpses into Sheikh Zayed’s personal interests, such as his favourite hunting rifles; and the gifts he was given by visitors, such as stuffed lions and cheetahs.
Where to stay: You’re are already close to home for this trip, so no need to book a room. 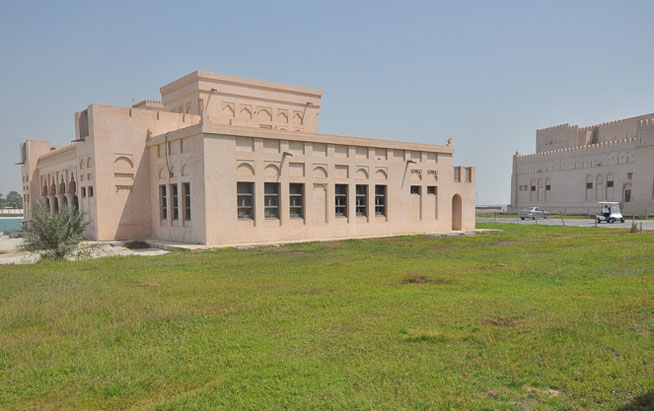 How far: Approximately 170km from Abu Dhabi to Al Ain, near the Public Garden in the city centre.
Drive and destination: We’ve spoken about Al Ain’s drive on the previous pages, but suffice to say it’s picturesque and filled with desert. You can’t miss the striking Al Jahili Fort. One of the UAE’s best-known buildings, this large tan-coloured structure has stood near Al Ain since its creation in 1891. At the time, it was built to defend the city, and to protect the important resource of the city’s palm groves. The Oman Trucial Scouts used the fort to maintain inter-tribal peace and man the mountain passes. Inside you’ll find the works of a British adventurer taken from a 1940s crossing of The Empty Quarter.
Where to stay: Pushing towards the top of the charts in terms of reviews, Al Ain Rotana overlooks a green park, has a beautiful outdoor pool, and is centrally located with mountain views. 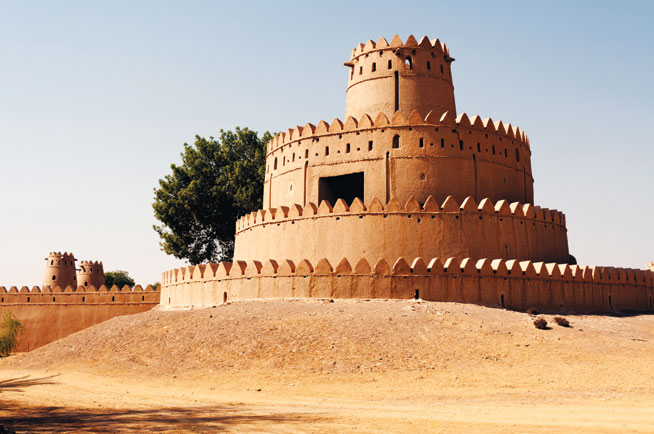 How far: In the Empty Quarter, around 180km from the Abu Dhabi Golf Club.
Drive and destination: Have you ever dreamt about riding a camel across dunes, soaking in a sparkling swimming pool while animals roam in the land below, and otherwise embracing the quiet charm of a luxurious Bedouin lifestyle? Then you’re in luck. At the stunning Qasr Al Sarab Desert Resort, you’ll be delving into Arabic surroundings within the Liwa Desert – one of the largest uninterrupted sand deserts in the world. To get there, you’ll drive through the magnificent Liwa Desert. And if you fancy a stop to stretch your legs, look out for the interesting Liwa Car Museum.
Where to stay: There’s only one option here: Qasr Al Sarab Desert Resort By Anantara. 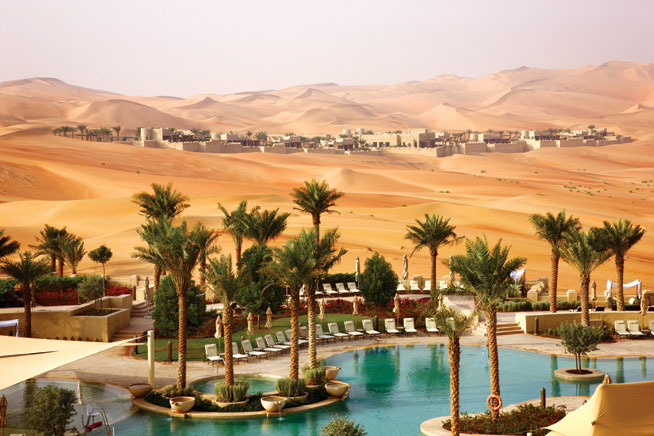 Culture
News
Staycations
Things to do
Travel
EDITOR’S PICKS
Here's the full list of UAE public holidays in 2023
READ MORE
23 incredible things to look forward to in the UAE in 2023
READ MORE
Hidden gems: 10 UAE desert pop-ups to discover this winter
READ MORE
Where to travel in 2023: 10 new flight routes from the UAE
READ MORE
MOST POPULAR
With its unique decor, Dubai's La Nina restaurant evokes tales of distant travels
Reservations are now open for French restaurant Fouquet's Dubai
The colourful Sharjah Light Festival returns next week
Relive those cosy winter moments at Chalet 105 at Twiggy
There are some big road closures in Abu Dhabi this weekend
YOU SHOULD CHECK OUT
Our website uses cookies and other similar technologies to improve our site and your online experience. By continuing to use our website you consent to cookies being used. Read our privacy policy here.