What’s On has a video released by 2454 Abu Dhabi of the Fast And The Furious 7 Abu Dhabi film set. See the stars and the cars in action.

Can’t wait till April 2, when Furious 7 hits cinemas in the UAE? Well this should hold you over till then.

An exclusive behind-the-scenes video of the supercar heavy franchise Fast And The Furious is making rounds on the internet and was released by twofour54, the company who helped make the capital one of the most memorable locations of the whole movie.

With shots of the red sand dunes, Corniche skyline, Etihad Towers and glamorous Emirates Palace all making an appearance in the video – it is clear Abu Dhabi will play a prominent role in the film. 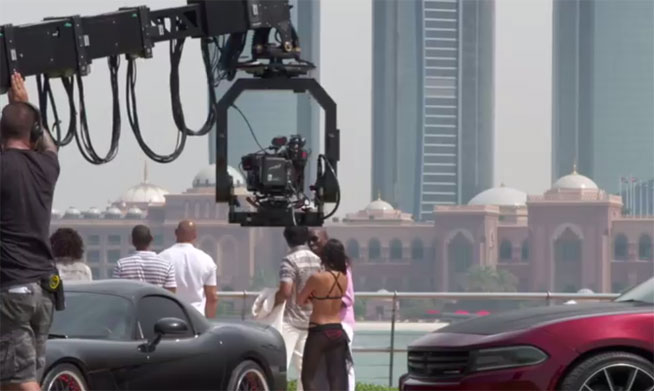 Fans of the franchise will see Vin Diesel, Michelle Rodriguez and rapper Ludacris in the two minute video.

Hollywood starlet Rodriguez, who plays Letty in the films, says “I went to Abu Dhabi about two years ago on a visit and all the questions I got were when are they bringing a Fast and Furious to Abu Dhabi?”

The film will debut in the UAE on April 2.

News
Outdoor
Sport & Fitness
EDITOR’S PICKS
Here's the full list of UAE public holidays in 2023
READ MORE
23 incredible things to look forward to in the UAE in 2023
READ MORE
Hidden gems: 10 UAE desert pop-ups to discover this winter
READ MORE
Where to travel in 2023: 10 new flight routes from the UAE
READ MORE
MOST POPULAR
11 homegrown UAE restaurants that have gone global
13 new brunches in Dubai that will spice up your February
You can now tour these 12 ladies' nights on Yas Island
Sweep your special someone off their feet at TH8 Palm Jumeirah
Brr... Longevity Sports launches world’s first mobile ice bath in Dubai
YOU SHOULD CHECK OUT
Our website uses cookies and other similar technologies to improve our site and your online experience. By continuing to use our website you consent to cookies being used. Read our privacy policy here.