Every spring, like clockwork, thousands of pop culture aficionados descend en masse upon Dubai to get their fill of everything from comic books and manga to video games and celebrity guests. A veritable cornucopia of nerdy pursuits that over time, thanks in no small part to the explosion of superhero films at the Hollywood box office, has moved out of the realm of the awkward comic collector and into the conscience of the mainstream.

Now in its fourth year, the Middle East Film & Comic Con organisers predict it will be bigger, better and crazier than ever, expecting a footfall of some 50,000 eager attendees as it returns to the Dubai International Exhibition Centre. An ambitious goal, but one that immediately becomes obtainable once you realise the calibre of talent coming to town this year.

Top billing goes to William Shatner, the screen legend whose most famous work portraying tacit king of the nerds, Captain James Tiberius Kirk, is sure to bring all manner of closeted Star Trek fans out of the woodwork at warp speed, particularly in light of the recent passing of his on-screen co-star Leonard Nimoy. Shatner will meet fans for signings and photo ops (for which the queues will undoubtedly snake for miles) as well as demonstrating his droll humour as part of a Q&A panel.

Other guests include the likes of actor Sam J Jones, best known for his role as 1980s cult hero Flash Gordon, as well as Gillian Anderson, the star of The X-Files, who will no doubt be quizzed about recent news that the show will reboot later this year, with her and David Duchovny starring

Further to that, Clive Standen, of The Vikings, Robin Hood, Doctor Who and Hammer of the Gods fame, will appear. So too, Hayley Atwell, the Marvel Universe’s Agent Carter. 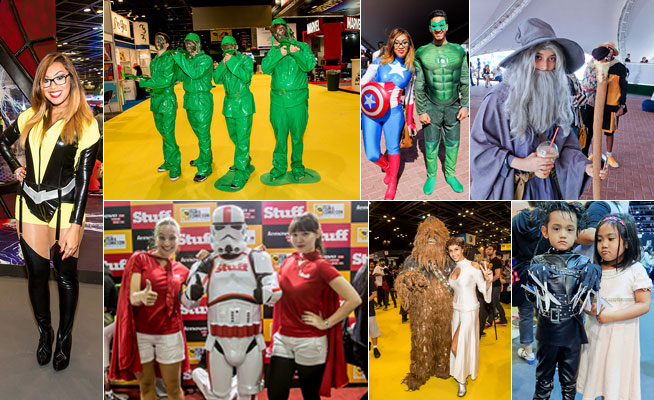 An Artist’s Alley will feature work from international and regional artists, with mainstream and independent comic publishers such as Marvel and Image on hand to showcase their latest and greatest. Hollywood screenwriter Max Landis (Chronicle) also makes his annual return as host of the hugely popular Cosplay competition.

Among the exhibits will be The Tumbler, a replica of the car that featured in Batman Begins. The street machine is fully road-worthy with a working interior and is a perfect representation of the iconic vehicle.

There’s never been a better time to immerse oneself in a cross-section of all things popular culture, and it’s doubly encouraging to see the level of passion and enthusiasm that’s shared by countless rabid fans across the Middle East that come together once a year to let their geek flags fly.

William Shatner
The actor will field all your burning TJ Hooker-related questions. Oh wait, that’s right, there’s that other little known television show that you might recognise him from, something about trekking across vast expanses of space. Sure to be a fun and lighthearted panel, you can be sure Captain Kirk will be setting his phasers to stun. 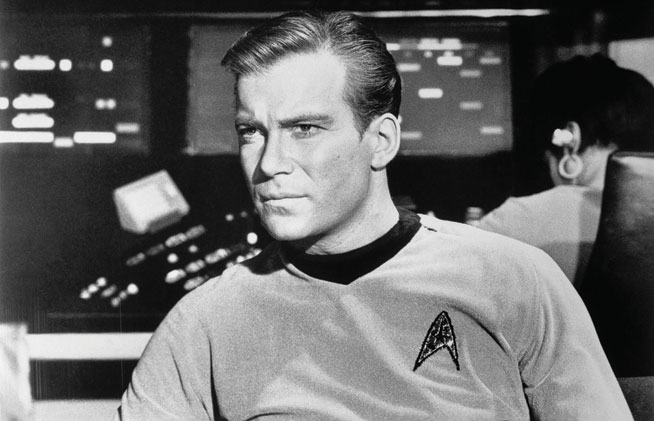 Cosplay competition
Hosted by MEFCC regular, Max Landis, this is a chance to bust out your arts and crafts skills, slap on some body paint and get creative. With prizes over several categories including Best Movie Character, Best Video Game Character and Best Group, it’s the perfect opportunity to get your friends together for the a dramatic reenactment of the Mos Eisley cantina scene from Star Wars. 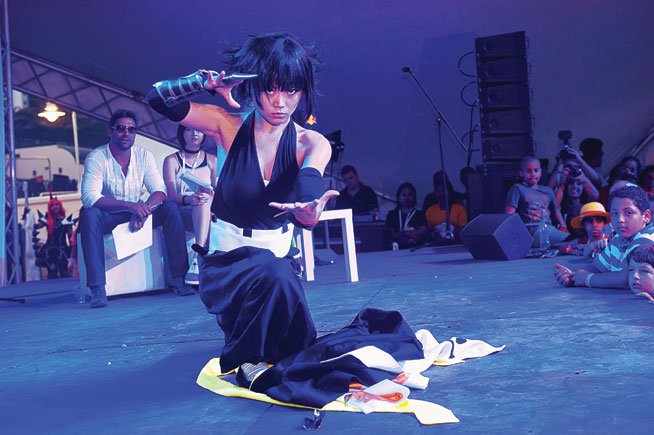 Artist Alley
It wouldn’t be a comic convention without awesome artwork on display. Artist Alley will showcase work from international heavy hitters such as Andy Suriano and Mahmud Asra who have worked with industry giants such as Marvel and Disney. This year there’s also a fantastic range of some of the Middle East’s rising stars on show.

The Tumbler
A replica of the car that featured in Batman Begins, this fully road-worthy beast will be on show all weekend. 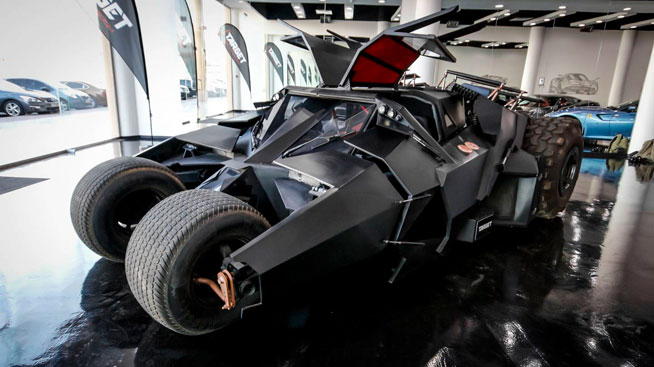 Gillian Anderson
The star of The X-Files has a special place in the hearts of many a male sci-fi fan. Her appearance comes just weeks after her TV partner David Duchovny announced they will reunite for one last X-Files hurrah.

You must have clocked up a few Comic-Con appearances. Do you enjoy them? Yes, I’ve done a few over the years and really enjoy the fans’ excitement and stories. I always arrive one hour early and walk the whole venue to get the fans’ perspective.

Why does sci-fi attract such a loyal fan base? The fact of it. In science fiction just about anything and everything is acceptable. The creative dynamics are unrestricted and reach all demographics and cultures.

What is it about Flash Gordon that has made it such a cult classic? It’s an eclectic blend of traditional good versus evil, great action, memorable characters, comedy, special effects and catchy one liners. And it’s visually masterful. I did not know it would evolve into what it is today.

Any chance of a remake? Matthew Reilly at Fox Studios acquired the screenplay rights to Flash Gordon and told me he has [producer] John Davis developing a new movie version. I believe it will happen. 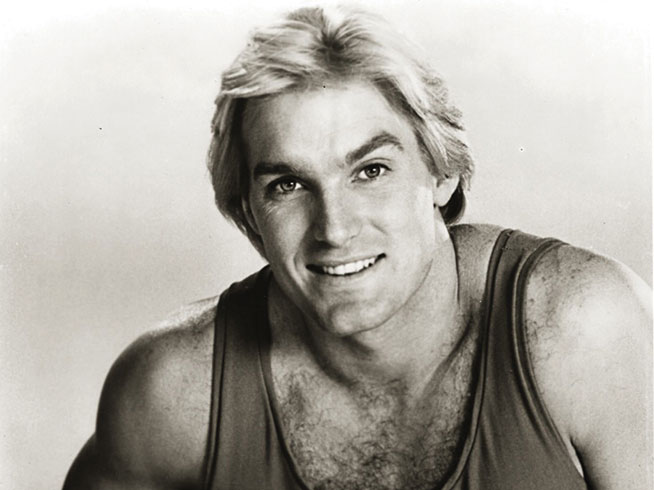 How did you get involved in the Mark Wahlberg film Ted? Seth MacFarlane called me and told me that when he was eight years old, Flash Gordon and myself influenced his life so much that he wanted to be a creative person in the industry.

Was it fun to film? Yes, both the first and the sequel were a blast. Ted 2 will be out this summer and is expected to be even funnier. I just signed for Ted 3 also.

Art
Culture
Film
News
Things to do
EDITOR’S PICKS
What’s On Nightlife Awards 2021: Here are the nominees...
READ MORE
It's back! What's On Lock In returns to Media One Hotel
READ MORE
Arts and culture: 5 spots we can't wait to visit at Expo 2020 Dubai
READ MORE
UAE petrol prices are set to decrease in September 2021
READ MORE
MOST POPULAR
This chic new rooftop bar is coming to Dubai Marina for a limited time
A pair of Pickl burger joints are opening in Abu Dhabi
The London Project to open huge new venue with three exciting concepts
Head to Dubai Opera in October for the timeless music of Frank Sinatra
Coming soon: The hottest new bars, restaurants and beach clubs
YOU SHOULD CHECK OUT
Our website uses cookies and other similar technologies to improve our site and your online experience. By continuing to use our website you consent to cookies being used. Read our privacy policy here.