Is a lego-themed hotel coming to Dubai?

What’s On has details of a possible LEGOLAND hotel to be built near LEGOLAND Dubai which opens in October 2016.


Toy building blocks might not make the most comfortable bed to sleep on but that wouldn’t stop fans from checking-in here.

Although specific details of a LEGOLAND hotel have not been released – or confirmed – yet, tongues were set wagging this week by possible rumours of a hotel on the horizon. Dubai Parks and Resorts are yet to confirm but have released this statement.

“Currently, Dubai Parks and Resorts’ focus is squarely on delivering the four theme parks,  motiongate Dubai, Bollywood Parks  Dubai, LEGOLAND Dubai and LEGOLAND Water Park, along with  Lapita Hotel and Riverland.  Merlin Entertainments Plc is the operator for the LEGOLAND theme park and water park.  As part of our ongoing relationship with Merlin Entertainments we are in early discussions about a possible LEGOLAND Hotel, we hope that we can have a LEGOLAND Hotel as part of the destination, but there is no agreement in place.”

Such a development would be the first of its kind in the region, and the fifth globally.

“We have in our overall master planning allocated an area for a hotel in close proximity to the LEGOLAND park.  We will revert to the market with any material updates on this development,”  they added.

As Dubai tiptoes closer to becoming the theme park capital of the world – with huge attractions underway courtesy of Dubai Parks & Resorts – it would make sense that the hotel-industry would jump in on the action.

While we speculate that adults may not necessarily appreciate the hotel’s décor, it will definitely be something that children would love.

LEGOLAND Hotel at LEGOLAND Florida opened to much fanfare earlier this month. With a colourful Lego brick façade, Lego-themed rooms stocked with Lego models, a disco elevator, and a swimming pool complete with Lego-themed floats – it’s safe to say we could expect the same from a Dubai counterpart. 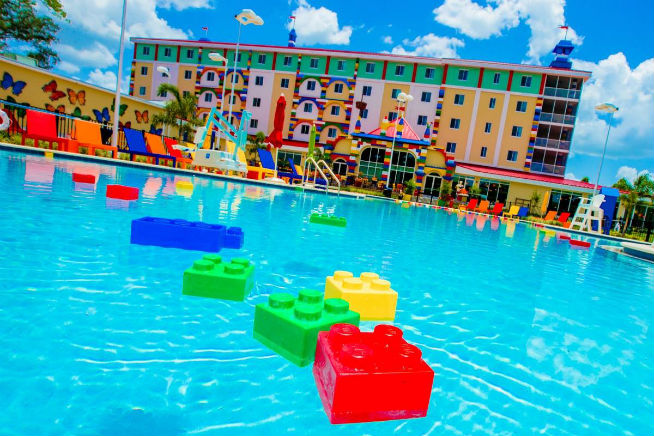 LEGOLAND Dubai covers a total of three million square feet made from more than 60 million Lego bricks. This includes over 40 interactive rides, shows and attractions set in six themed lands – LEGO City, Adventure, LEGO Kingdom, LEGO Imagination, Factory, and Miniland – a unique site showcasing some of the most iconic buildings and landmarks from Dubai and the Middle East – replicated to scale in Lego bricks.

This exciting information comes hot off the heels of Dubai Parks and Resorts announcement that the theme park will also include a waterpark. One of the coolest attractions will be the “Build-A-Raft River,” where kids can put together their own raft made of soft Lego bricks and float down a lazy river. There’s also an interactive Imagination Station, where children can build bridges, dams and cities and test their designs against the flow of water.