Hype talks to City 7 TV news presenter about his memories of Dubai, awkward TV moments and his dream interview.

Where are you from? Pakistan. I was brought up in Dubai and had my secondary education here so I class Dubai as my home as well.

What do you do here? I work as a news presenter for Dubai TV station, City 7. I’m one of the youngest news presenters there. My job revolves around local news, government announcements and events, so it’s pretty exciting. I get to see behind the scenes, how the city operates and what’s really going on around town.

How long have you been a news presenter? For two years now. I had a brief stint with a PR agency for six months beforehand, so I’ve worked in Dubai’s media industry for two-and-a-half years.

What inspired you to work in news? When I was growing up, I was always interested in what made a city run, and that developed my interest in news and politics. At university, I joined the university’s TV station. I did some high-profile interviews – with the former Pakistani president Pervez Musharraf, for example. That was my first big interview, and got me into broadcasting. Meeting high-profile people, and rubbing shoulders with them, made me realise it was my profession.

How did you get started? I had a good show reel from university, and started off as a reporter and a researcher. Luckily, I managed to impress the producers on screen. When I had time to practise and develop my voice, I got on air in my first month. As time went by, they were confident in me, and they believed in me, which allowed me to become a full-time presenter. 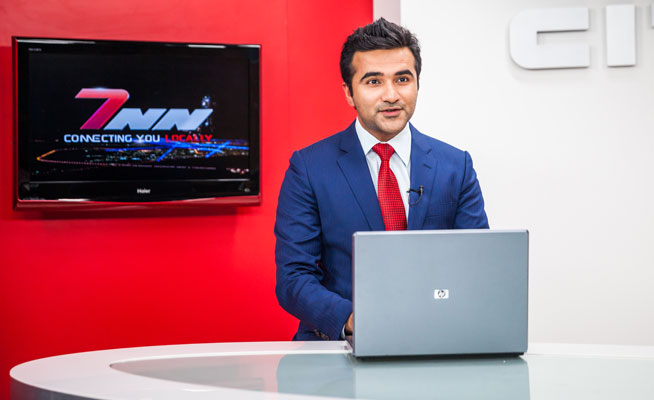 Tell us more about what you cover. General Dubai news. It’s a wide range of things, but sport is my own department. Whenever there’s a sporting event, I’ll cover it. Sport’s one of my areas of passion – I’ve covered the Rugby Sevens, the Dubai Tennis Championship and cricket tournaments.

What’s the strangest Dubai news story you’ve reported on? I’ve had to cover some peculiar events. LuLu Hypermarket earned the Guinness World Record for the largest collage of detergent bottles, and I had to cover it as one of my first news stories. Another thing I covered was someone attempting to break the record for holding breath underwater. That was by a Serbian diver, Branko Petrovic, who was in Dubai for the inaugural Xtreme Sports Expo, and he held his breath for more than 11 minutes. I was so shocked he could do that.

Who’s the most famous person you’ve interviewed? Because I look after sports news, I get more exposure to sporting personalities. I’ve met Roger Federer, Amir Khan, some Formula One stars like Romain Grosjean, and Venus Williams. 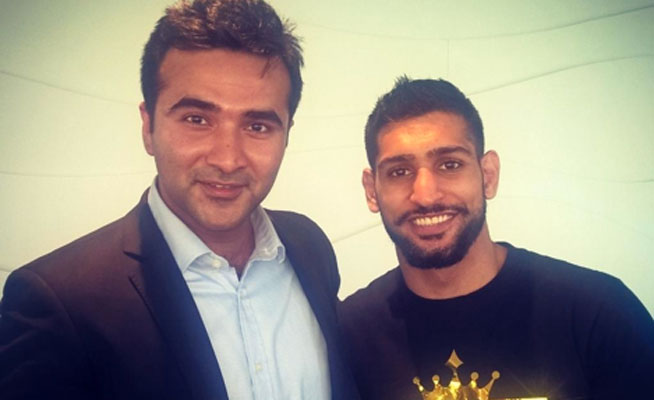 Have you ever had an awkward interview? There are times when you need to research, but sometimes, you’ve got hectic schedules and don’t know as much as you should. I’ve turned up to medical events and interviewed someone about diabetes or cardiovascular diseases, despite not knowing any of the scientific terms. I’ve had to stop people when they’re using medical jargon, just to ask them what they actually mean. Those are the awkward ones.

Who would be your dream person to interview? Sheikh Mohammed Bin Rashid Al Maktoum [Vice President and Prime Minister of the UAE and Ruler of Dubai]. I used to live near one of his residences, in Al Safa. We’d be playing street cricket and he’d drive past. He always waved, and sometimes put his window down and said hello. I see him now at events, walking past. I’ve made eye contact with him, but that’s it. I’d love to chat with him about how he’s seen the city grow. I’d want to know how he turned Dubai into this massive metropolis.

Has anything ever gone wrong in the studio? Sometimes you say wrong things on air, but luckily we always prerecord. If things are mispronounced or a wrong figure’s given, we have time to do a retake. You tend to fix it yourself rather than bring yourself down.

What’s the most challenging thing about your job? The daily deadline. Sometimes an event goes on too long, or the interviewee pulls out of an event. You’re left stranded there, and need to be back at the studio soon. At the same time, the improvisation’s the best thing about the job. Spending a few hours at an event, finding the right person to interview, deciding whether to do a feature – it becomes second nature. Getting the right people at the right time is a challenge. You prepare a Plan A, but you also have to think about Plan B, or even C.

First impressions of Dubai? I moved here from Saudi Arabia, and it was a big change. Dubai was a nice, humble town, and it’s always had this homeliness to it. I went to Safa Park a lot, and I remember going on the Ferris wheel there, thinking it was a massive thing. Now a short drive away there’s the Burj Khalifa.

Have those impressions changed? There’s a lot more people. It’s busier, so I always end up stuck in traffic. Dubai’s still kept its openness, though. This city has so much to offer. I’ve seen Dubai grow from a little town to a city that can compete with the likes of London or New York.

Favourite place to eat in Dubai? Noodle House. And when I want to go back to my Pakistani roots, I head to Ravi’s in Satwa, which is always great. I like Asian food.

Favourite place to catch up with friends? Barasti. You can have a catch-up, sit on the beach or play pool on the top deck. Not many cities have a beach bar with such fantastic weather for most of the year. I always bump into colleagues or old school friends there.

Favourite club or music event in Dubai? I like the Superheroes nights in Media One Hotel. It’s such a central location there, and house music’s something I really enjoy. I’m not a huge clubber, really, but I also like Q43.

Favourite international DJ or band? I saw Axwell and Ingrosso at the Formula One, and I like Calvin Harris’s music – very commercial, I know. I like drum ‘n’ bass and I’ve been to a few dubstep nights too. Rusko was great.

Favourite Dubai-based DJ or band? DJ Bliss. He’s a former colleague in the media industry, and I’ve had a chance to see him live a few times.

What do you do when you need some ‘me’ time? I love driving around, exploring the UAE. I went on a quick trip to Oman once, with a friend who was visiting. We drove for 15 hours, with just a few breaks, through the mountains to Muscat. The next morning, we went another four or five hours further into Oman, and drove back to Dubai the same night, which was another eight-hour journey. Tiring, but the drive kept me going. That’s my ‘me’ time – chilling behind the wheel, listening to good music and having good company.

How would you sell Dubai to someone who has never visited the city? You can spend your time shopping, come on a business trip, explore the deserts or mountains, come on a stag do, or a family holiday, or just have a city getaway from Abu Dhabi. Where else can you go skydiving at the beach, but ten minutes way, go skiing and snowboarding? Then half an hour down the road, you can go sandboarding or hiking in the mountains?

What’s the secret to success here? Focusing on your goals and having the motivation to constantly improve. When I meet high-profile people I’ll chat to them, I’ll get some first-hand advice, and I’m always asking my producers how I can improve myself.

Top tip for getting the most out of Dubai? Explore everything. Be open-minded. This is a great city to be living in to be exposed to different cultures. If you’re a cultural explorer or an urban explorer, this city’s an urban jungle.

What’s next for you? I’d love to move to a bigger news organisation. I’d love the challenge of international news. This is what I love, this is my passion, and I wake up every morning willing to do my best.

News
Sport & Fitness
EDITOR’S PICKS
So, when is the next UAE public holiday in 2021?
READ MORE
All of the lavish new hotels set to open in Dubai in 2021
READ MORE
16 of the best pool passes in Dubai that are fully redeemable
READ MORE
All of the restaurants at West Beach, Palm Jumeirah
READ MORE
MOST POPULAR
Emirates announce discounted fares to quarantine-free destinations
Review: Kinoya – from supper club to fully-fledged licensed restaurant
Abu Dhabi to relax certain rules in nurseries
Review: No. FiftySeven Boutique Café inside Mall of the Emirates
Al Ain Raceway temporarily closed after freak storm on Saturday
YOU SHOULD CHECK OUT
Our website uses cookies and other similar technologies to improve our site and your online experience. By continuing to use our website you consent to cookies being used. Read our privacy policy here.