The bizarre, remarkable, astonishing, fantastic, surprising and incredible things you can do in the UAE’s capital.

A is for Al Ghazal Golf Club 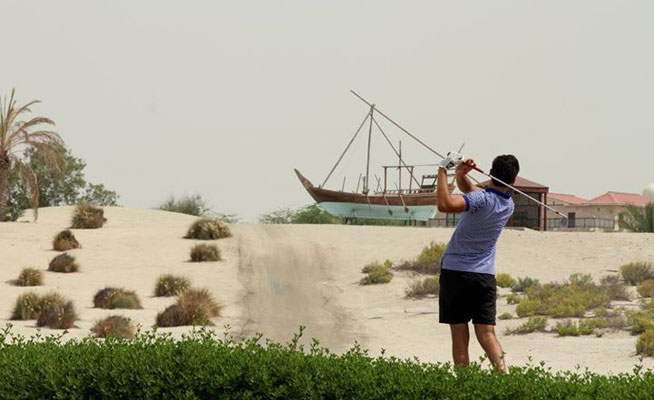 During a round of golf, the idea is usually to avoid the sandy bunkers, although that’s more than a little tough at Al Ghazal. With an 18-hole course made of specially treated compact sand, you’ll be aiming for the browns instead of the greens.

B is for Bucket Listers 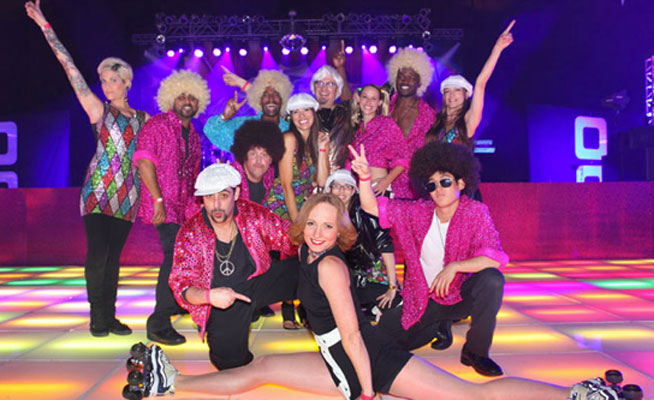 Bucket Listers is a meetup group that sees people get together to do incredible things. The list of upcoming activities include dancing at an ice-skating disco, exploring cuisines and going to a formal Scottish Ball. Members of the group can also suggest events and co-host.

C is for Chakra Crystal Massage 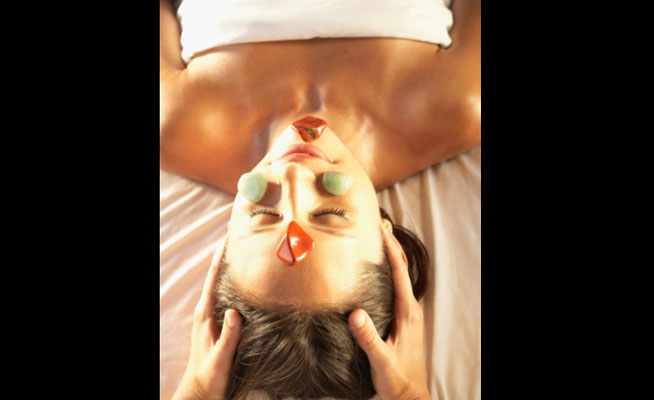 Use the supposed healing power of crystals to sort out your chakras. The massage will see guests have a variety of gem stones (amethyst and quartz make an appearance) placed on specific points on their body in an attempt to open up blocked chakras. Afterwards you’ll receive a hot stone massage.

D is for Driverless cars in Masdar 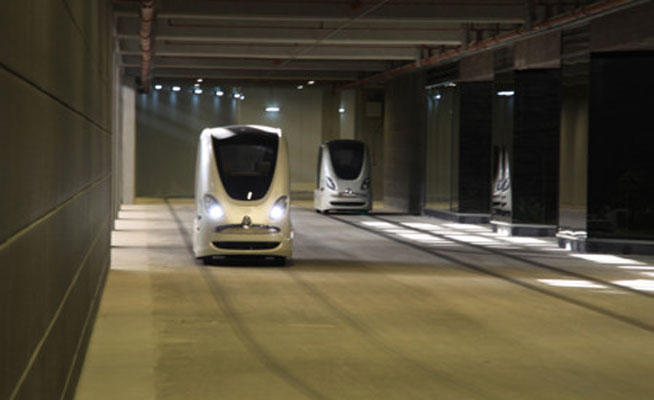 Leave your licence at home and let the robots at Masdar City do the driving. The Personal Rapid Transit vehicles, as they are officially called, use computers and magnets embedded in the concrete floors to help navigate. The cars can even reach speeds of 40kph, while all you have to do is sit back and relax. 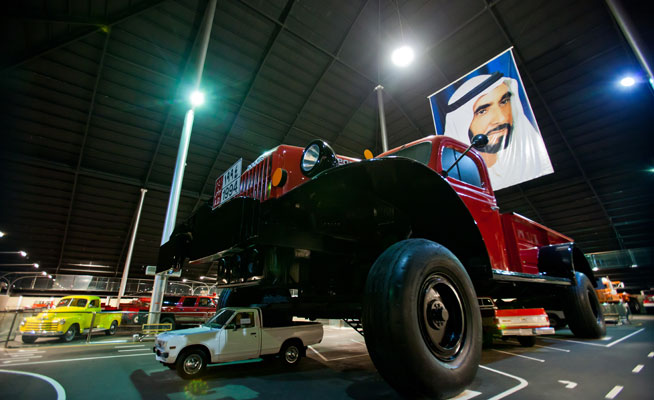 The private collection of HH Sheikh Hamad Bin Hamdan Al Nahyan features some amazingly supersized and modified cars. There’s seven matching Mercedes in the colours of the rainbow, a handful of classic cars, and even military vehicles (one has a golfing range on top) that have been tricked out into your wildest dreams.

F is for Flyboarding 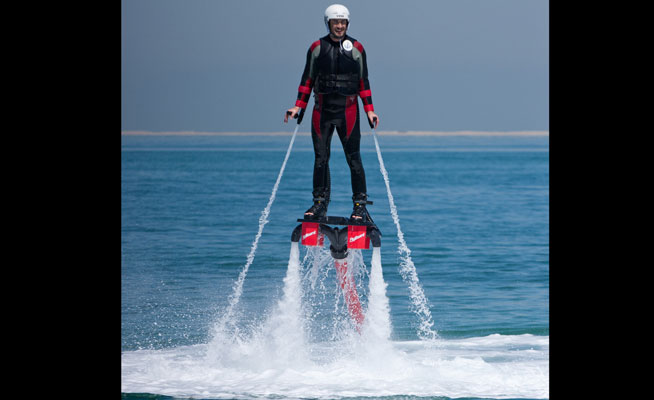 Invented in 2012 by Frenchman Franky Zapata, this relatively new sport allows participants to “fly” through the air using water propulsion. After you’ve strapped your feet into the special flyboard, which is connected by a pipe to a jet ski, you can shoot above the surface of the water. Score extra points if you can manage a few flips.

G is for Gold vending machines 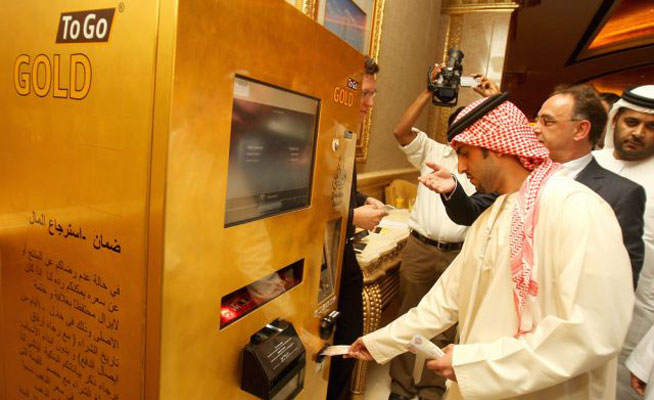 While surrounded by the opulent surroundings of Emirates Palace, it can be a little tempting to splash some cash. So it should come as no surprise the hotel was the first to keep a Gold-to-Go vending machine in the lobby. Guests and tourists can purchase special keepsakes that range from 10gram gold bars to UAE-themed gold coins.

H is for Hijama

Translated as cupping from Arabic, this ancient suction treatment is popular in both Arab and Asian traditions. Celebrities such as Jennifer Aniston, Gwyneth Paltrow and Lena Dunham have all tried the alternative health practice, which is meant to promote healing and is claimed to help with blood disorders, fertility issues and skin problems.

I is for Indoor skydiving 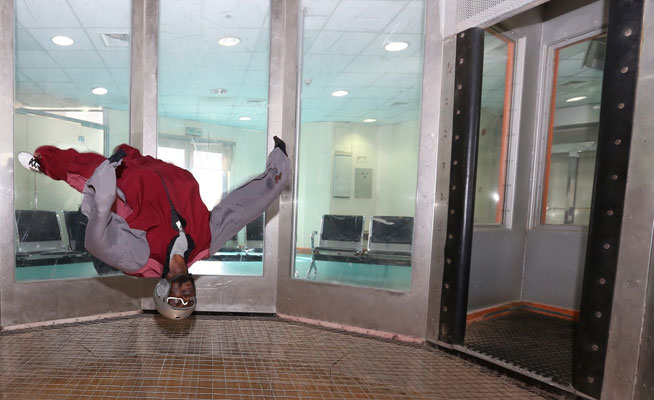 Ditch the plane and the parachute with this indoor version of skydiving. The Spacewalk at the Abu Dhabi Country Club features a vertical wind tunnel that can lift you up in the air. It features an 875-horsepower fan system, which means wind speeds can reach up to 160kph. Participants should note there is an 85kg weight limit.

J is for Juicing 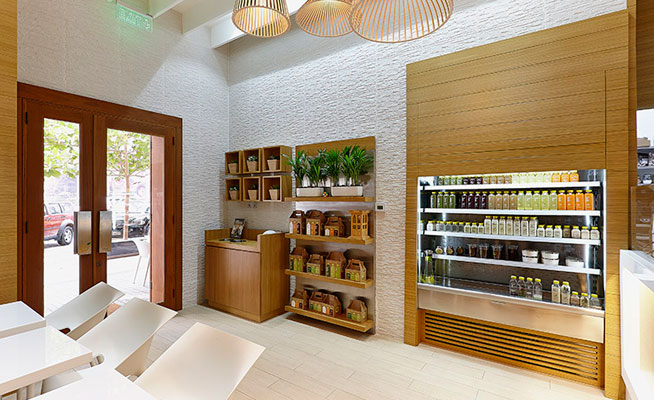 The juicing craze is booming at the moment and we recommend trying The Raw Place’s signature savoury specialty the Salmorejo. The 16oz drink is made up of tomato, watermelon, green peppers, spring onion, garlic, mustard seeds, olive oil, Himalayan sea salt and black pepper, and tastes like a chilled tomato soup.

Fancy acting like a kangaroo at your next workout? Kangoo Jumps is a quirky fitness trend that sees participants strap on specially made bouncy shoes that are meant to reduce stress on your joints while you run or jump. Originally designed for injured athletes, the boots have spawned their very own fitness classes that feature both floor exercises and aerobic dance routines to really work up a sweat. Inspire Sports offers ladies-only classes here in the capital.

L is for Land sailing 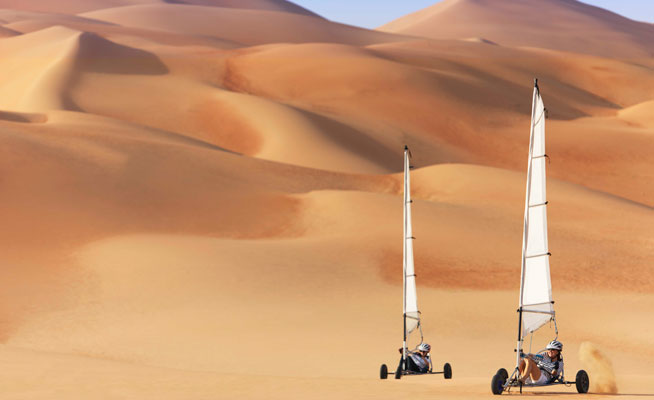 Surf the dunes of the Liwa Desert in a land sail at the Qasr Al Sarab resort. Using the power of wind, a sail rigged up to a three wheeler-like bike will let you move across the sand effortlessly. Sessions are subject to availability and weather conditions.

M is for Micro-pigmentation 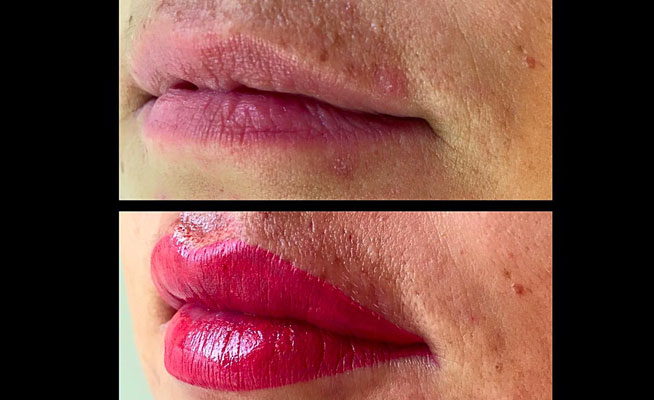 Wake up with make-up. South African Marcell van der Plas specialises in a semi-permanent pigmentation process that sees coloured particles placed under the skin (think bold eyebrows, perfectly applied eyeliner or bright lips) for results that will last for approximately two to four years. The cosmetic treatments have also been used for cancer patients who have undergone chemotherapy and experienced hair loss. Prices start from Dhs2,000. 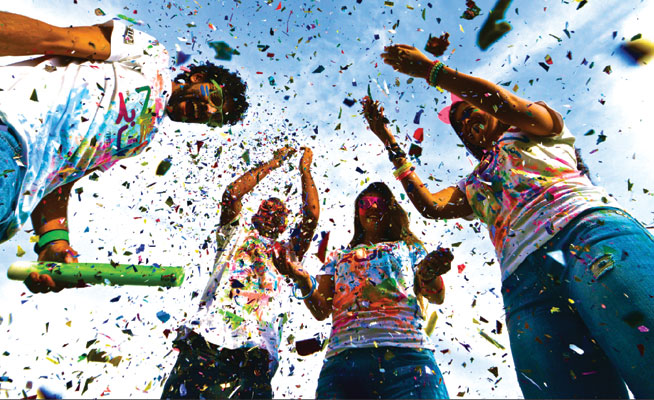 Need some extra motivation to get you running? Then check out the city’s first Neorun. Hosted at Zayed Sports City on October 29, this fun run will see runners get splattered with glowing UV paint as they make their way through a Halloween-themed spooky track. Runners can then celebrate crossing the finish line at the psychedelic Enigma Party, complete with DJs.

O is for Oxygen facial 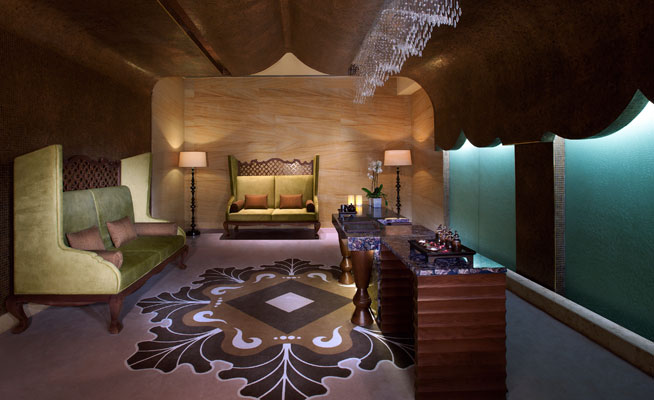 Blast your face with cold oxygen! The Age Defying Oxygen Treatment at the Anantara Spa uses German technology to apply 95 per cent pure oxygen on to the skin, which is said to boost elasticity and enhance skin cell renewal. The treatment lasts 90 minute. 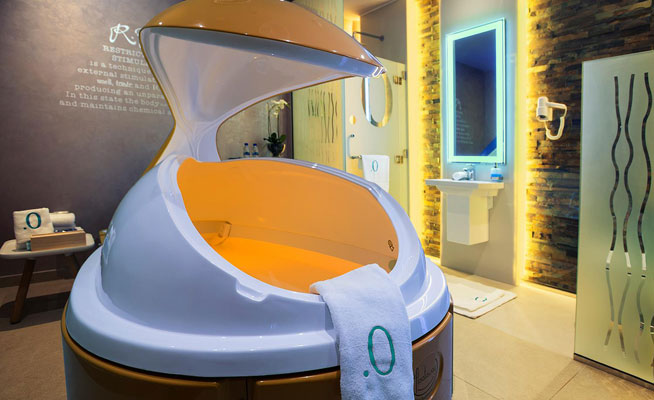 Float your worries away with a treatment that is similar to taking a dip in the Dead Sea. Guests will be able to float effortlessly on a super-saturated salt solution in either a special pool or pod. The treatment’s makers claims guests will be able to relax deeply, due to a decrease in external stimuli. Participants can also request meditative music or lights for a different experience. Floating treatments are available from 30 minutes, 45 minutes to
one-hour sessions.

Q is for Quinoa biryani 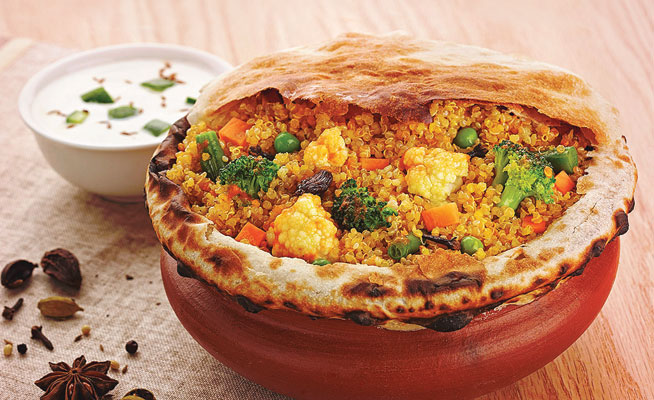 For a healthier twist on your next biryani, check out one of our favourite dishes – the protein-packed quinoa version being served at Biryani Pot. The What’s On Award-winning Indian restaurant serves up the gluten-free and organic veggie dish in a clay pot that is topped with a crisped layer of flat bread. Meat eaters have the option of adding lamb, chicken or shrimp to their biryani pots for an extra charge.

R  is for Reiki 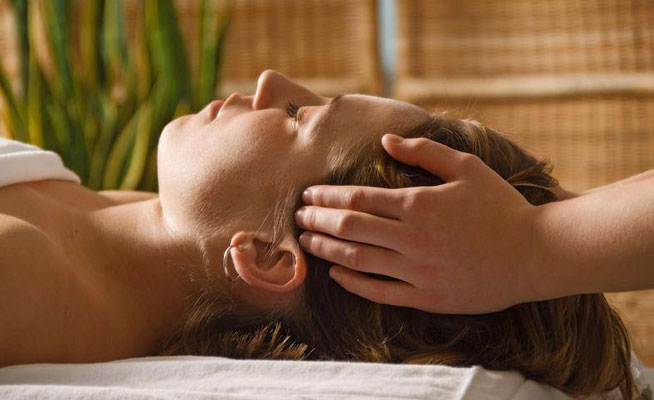 This hands-on approach (pun intended) to healing sees a therapist use their palms (both directly on the skin and by hovering over it) to transfer healing energy to patients. While no scientific research has proven the healing claims of the treatment, the Japanese discipline is still practised today and can be used for a variety of ailments including depression, pain management and sports injuries. 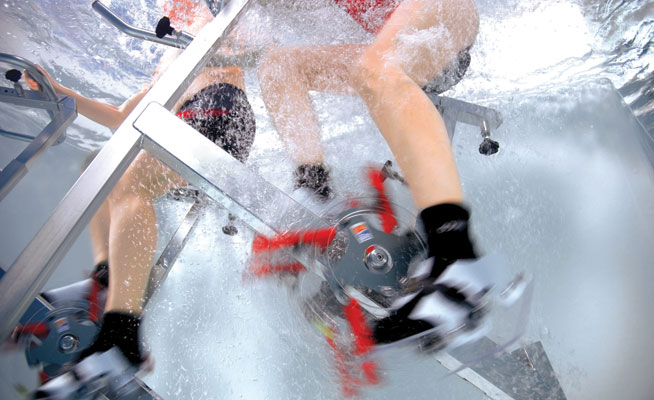 Part massage and part hydrotherapy, this exercise will see you cycle yourself slim in a partially submerged bath. Meant to help firm and tone the body, the bath/biking set up at Bodylines Gym at the Yas Rotana will see you pedal against the resistance of the water for a deeper workout. It’s claimed you can burn up to 700 calories per session and that the aquatic training can also help reduce cellulite.

T is for T-Rex 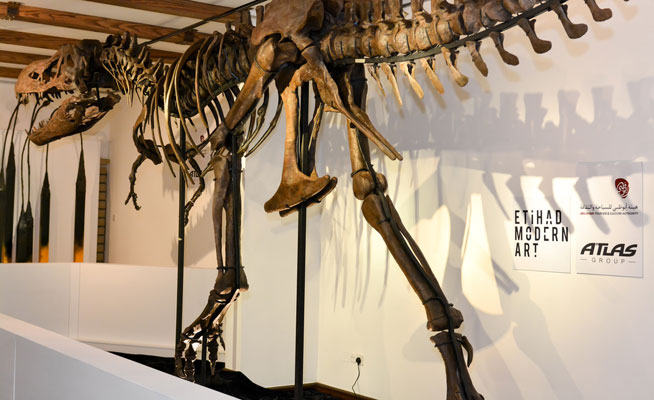 Even though Tinker, the world’s first and only juvenile T-Rex, is currently on tour in Japan, you can still visit the Etihad Modern Art Gallery and see a Tyrannosaurus Rex head. The museum currently has a life-size replica of a 12-metre long female’s skull on display. And because it is a replica, you’ll be able to touch it and snap a selfie too.

U is for Underwater snorkeling safari 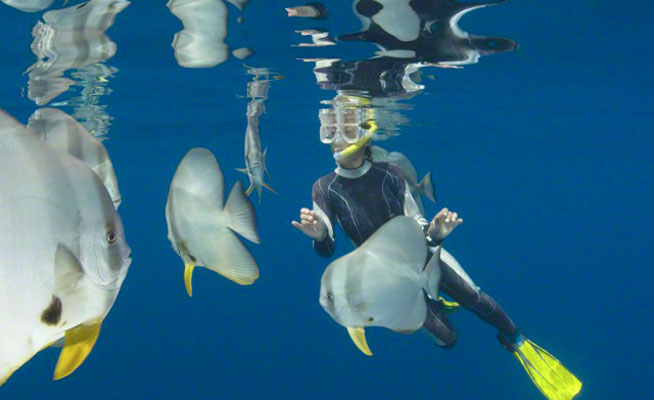 Head under the sea for a safari like you’ve never been to before. The Noukhada Adventure Company hosts four-hour snorkel safaris with stops at the ooid shoals and offshore coral reefs. The trips are only hosted in low tide, when the ooid shoals are exposed, and are dependent on weather.

V  is for Vertical flex

Also known as pole dancing, these ladies-only exercise/dance classes will help women build up their upper body strength and learn a few moves in the process. Participants will learn dance steps used in the tango, cha cha and samba as well as practise specific pole, transition and floor moves.

W is for Whitewater rafting 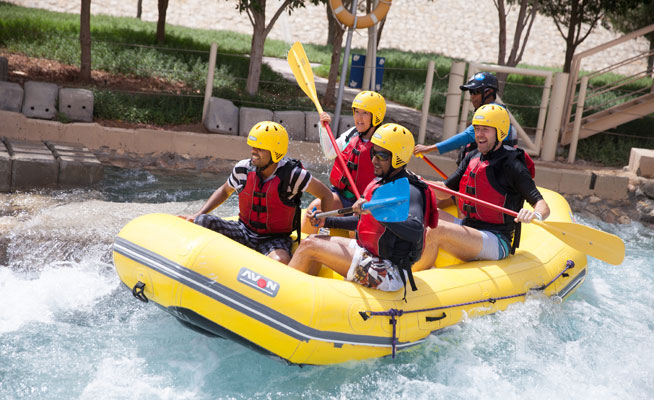 Head to land-locked Al Ain for a spot of whitewater rafting. The man-made rapids at Wadi Adventure were the first to be built in the region and have three separate levels, so both beginners and experts can have a crack at it. Each raft seats up to a maximum of six people and includes a professional guide.

X  is for X-factor auditions

Put your microphones away, these auditions aren’t for a singing competition; they’re actually for a job with Bounce Abu Dhabi. The indoor trampoline park at Marina Mall will have people literally bouncing off the walls, in order to join the free-jumping crew. The auditions should be taking place this month.

Y is for Yas Wire World

While everyone What’s On has spoken to is tight lipped about just what the new outdoor adventure park on Yas Island will offer, we’ve been told that the amusement space will include 75 activities including high wire ropes, a bike park, and bungee trampolines.

Z  is for Zaya Nurai Island 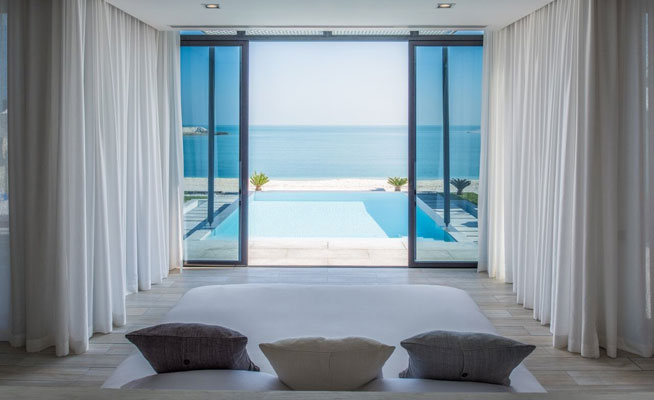 This hideaway just off the coast of Saadiyat Island features a boutique hotel resort that is as posh as it is pretty (with the prices to match). Expect white sand beaches, turquoise sea views as far as the eye can see and elegant facilities. The Zaya Spa should be opening up later this month and will feature a range of treatments including foot reflexology, Swedish massages and facial treatments.