With technology expo Gitex setting up shop in Dubai for the next week, techies, geeks and digi-dorks across the region will be flocking in to check out the latest gadgets on the market.

Among some of the new reveals is the RTA’s bundle of smart services, part of which comes in the form of 100 smart and air conditioned bus shelters to be installed across the city.

These new bus stops are dubbed ‘Smart Kiosks’, and have partnered up with the likes of du and Nol to bring public transport users a variety of services including free WiFi, phone top-ups, Nol card sales and even payment of bills.

Director General and Chairman of the Board of Directors of RTA, Mattar Al Tayer has said that they plan to construct 50 of the new Smart Kiosks over the next two months, and the remaining 50 next January.

Although this isn’t a world first for ‘smart’ bus shelters, Dubai is definitely going to be one of the first cities to implement so many so quickly.

Buy your groceries from giant screens in the metro 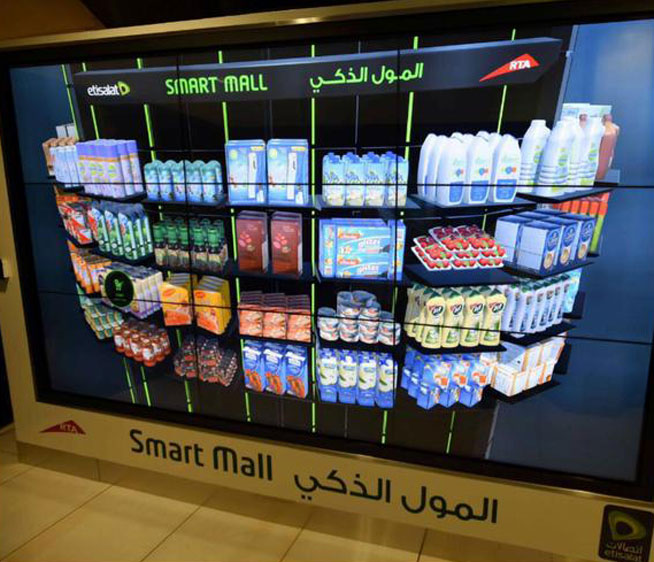 If that wasn’t cool enough, the RTA have also teamed up with Etisalat to bring us the ‘Smart Mall Project’. This will offer Dubai Metro commuters the ability to shop virtually at various stations through the use of interactive, 3D, ultra high-def, 9-square-metre screens (so yes, your purchases will be quite visible).

Each screen will permit up to two shoppers at a time to purchase food and eventually products such as electronics and clothing. Items are paid for by card, and a selected delivery location and time is chosen by the customer.

Doing your evening grocery shop whilst waiting for the morning metro? Suits us.

The initiative will be in five Dubai Metro stations: four on the Red Line – Mall of the Emirates, Damac Properties, Dubai Internet City and Abu Dhabi Commercial Bank; and one station on the Green Line – Baniyas.

The RTA have also said they plan on considering other payment options on these screens in the future, such as phone and Nol card balance.

If you’re a gadgeteer, gamer or just plain curious, then GITEX is one expo you’d be silly to pass up on. With a whole new bunch of technology on show, including UAVs, robotics, 3D printing, autonomous vehicles and everything in between, GITEX has proven itself as the number one place in the Middle East to discover the future of technology.

Plus, tech-sperts Stuff magazine are set to re-host the GITEX Hot Stuff awards – which plans to see the best gadgets from all of the world compete to be crowned king.

So if you were wondering whether that Fitbit you bought was really worth the money, or if that new tablet was the best buy, you’ll have to swing by and see which games and gizmos have been marked as this year’s champions.

– For more, head to the GITEX site.