Here are 6 thrillingly daring extreme stunts in Dubai that will live long in daredevil infamy.

Earlier this month, His Highness Sheikh Hamdan bin Mohammed bin Rashid Al Maktoum, the Crown Prince of Dubai posted an incredible video of himself riding over the Dubai Fountain on wires. Since then, lucky members of the public – including team What’s On – have been given the chance to follow in the Prince’s footstep and zip down past some of Dubai’s most iconic landmarks.

This isn’t the first extreme stunt to take place in Dubai though. In fact, our emirate has been the backdrop to some of the world’s most audacious and death-deyfing acts that have since received worldwide attention.

Here are 6 thrillingly daring extreme stunts in Dubai that will live long in daredevil infamy.

As iconic ziplines go, the XLine in the heart of Downtown Dubai, tops the lot. This gnarly ride begins some 30 stories high and shoots you across the sky like a barrelling roller coaster with a one-track mind – to fly you through the air at lightening pace. The zipline was just one of the exploits organised by XDubai, a new action group who have single-handedly helped to put the UAE on the map for epic extreme stunt locations.

2. Free-climbing the Burj Khalifa (oh, and the twisty tower…)

French climber Alain Robert is no stranger to the skyscrapers in Dubai: He’s solo-climbed two of the biggest!

In 2011, the 52-year old Spider Man made headlines around the world having scrambled up the Burj Khalifa, wearing only a rope and harness to comply with the organisers’ requirements.

Then, in 2015, he returned to Dubai to haul himself from ground level to the very top of the 75-storey Cayan (Twisty) Tower relying on just chalk and sticky tape on his fingertips.

For over a fortnight in April 2015, we gazed upwards to the top of Dubai Marina’s Princess Tower, watching as some of the world’s most extreme athletes leapt from a platform plummeting from the 99th floor back to earth.

The jaw-dropping stunt named Dream Jump Dubai was executed by Never Before Events in association with Skydive Dubai.

4. Donuting on the Burj Al Arab

Former Formula 1 driver David Coulthard maybe a pro when it comes to hairpin turns, but a helipad on top of one of the world’s most iconic hotels has to be his most thrilling.

While this was the first time an F1 car has burnt rubber on the world’s most talked-about deck, the Burj Al Arab is of course no stranger to eye-popping sporting feats. Tennis greats Andre Agassi and Roger Federer famously played tennis on it in 2005. 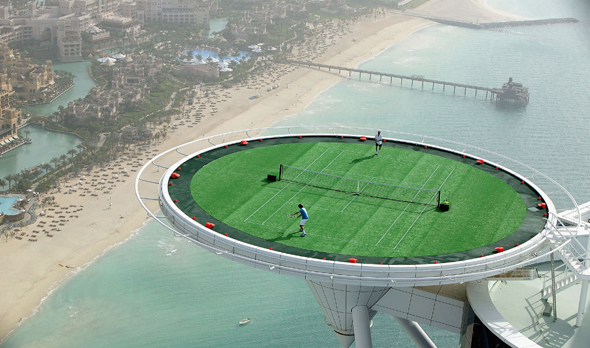 5. Base Jumping from Burj Khalifa

No, this isn’t a CGI scene from a blockbuster movie; this actually happened. It’s the ultimate base jump, for the absolutely insane. Skydive Dubai sponsored Soul Flyers World Champions Vince Reffet and Fred Fugen broke the Guinness World Record for the ‘highest base jump from the tallest building in the world’ in April 2014 when they took flight from a three-metre platform protruding from the very top. “This was the jump of a lifetime and an achievement of three years of hard training. I am glad we landed successfully, accomplishing a lifelong dream,” said Fugen.

Gaze up at the sky and you might just spot Jetman Yves Rossy whizzing past whilst strapped into his jet-powered wings. Most recently, Jetman introduced his new protégé, famed 31 year old skydiver and BASE jumper Vince Reffet (one of the basejumpers above) and the pair’s record setting twin human formation saw them fly together over landmarks like the iconic Burj Khalifa, The Palm Jumeirah and the Liwa desert.

News
Outdoor
Sport & Fitness
Things to do
EDITOR’S PICKS
So, when is the next UAE public holiday in 2021?
READ MORE
All of the lavish new hotels set to open in Dubai in 2021
READ MORE
16 of the best pool passes in Dubai that are fully redeemable
READ MORE
All of the restaurants at West Beach, Palm Jumeirah
READ MORE
MOST POPULAR
Abu Dhabi to relax certain rules in nurseries
Review: No. FiftySeven Boutique Café inside Mall of the Emirates
Al Ain Raceway temporarily closed after freak storm on Saturday
UAE 50: Here's your chance to have your photographs published in a coffee-table book
Get Dhs2 ladies' nights, brunches and cinema tickets
YOU SHOULD CHECK OUT
Our website uses cookies and other similar technologies to improve our site and your online experience. By continuing to use our website you consent to cookies being used. Read our privacy policy here.