A new 8.4km cycle track has just opened near Meydan in Dubai

A brand new, Dhs81 million, 8.4 kilometre cycle track near Meydan has just opened, and it’s free to use and open to the public.

Found in District One in the still-under-development Mohammed Bin Rashid Al Maktoum City (which is just next to the Meydan Hotel), the cycle track took eight months to construct and opened to the public yesterday afternoon.

Oh, and how awesome is the view?

The view and the location of the new District One Cycling and Running track doesn’t get better than this! #MeydanSobha #D1CyclingRunning #DistrictOne #Repost from @altber with @repostapp ・・・ stunning weather, Cycling with my friends in the new meydan cycling track #dubai #uae #altber #mydubai

Also coming to the upscale community of District One in Mohammed Bin Rashid Al Maktoum City is a lagoon, manmade beaches and a 14km boardwalk. The neighbourhood will be ready-to-move-into next year.

The picturesque new cycling track, which is also a running track and is lit at night by solar powered lights, is just a small part of Dubai’s development of cycleways, with the RTA planning around 900 km of tracks for safe cycling over the next few years. Areas they’re developing tracks in right now include Al Sufouh, Al Mamzar Park, Hor Al Anz and Mushrif Park.

Keen to check out the new Nad Al Sheba track? Here’s a map: 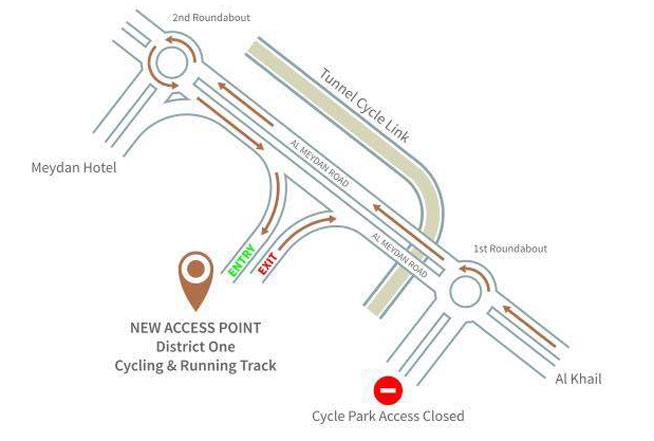 News
Sport & Fitness
EDITOR’S PICKS
UAE holiday dates announced for National Day
READ MORE
Emirates Dubai 7s is back: Here's why we're excited...
READ MORE
Tennis ace Andy Murray to play at Mubadala World Tennis Championship
READ MORE
UAE 50: Where to watch National Day fireworks in Dubai
READ MORE
MOST POPULAR
UAE confirms its first case of the Omicron variant
Alhosn Green Pass to only be valid for 14 days after negative PCR
20 of the best things to do in Abu Dhabi this long weekend: Part 2
First look: London-loved restaurant The Cinnamon Club opens in Dubai
Check out this amazing display at the world's highest outdoor infinity pool
YOU SHOULD CHECK OUT
Our website uses cookies and other similar technologies to improve our site and your online experience. By continuing to use our website you consent to cookies being used. Read our privacy policy here.