Star Wars The Force Awakens finally hits cinemas this Thursday and it’s arguably the biggest movie release of all time. And more importantly, much of it was filmed right here in Abu Dhabi.

Back in November 2012, Disney broke the internet. But they didn’t take a sledgehammer to it, or hire Kim Kardashian for a photoshoot – they did it by simply announcing they’d be making not one, but three new Star Wars movies. What’s more, they’d be set after the classic Return Of The Jedi, and the original cast (including actors Mark Hamill, Carrie Fisher and Harrison Ford) would all be returning to one of the most loved movie franchises of all time.

It was then the UAE’s turn to go potty when it was announced by twofour54 and the Abu Dhabi Film Commission that the first new film, The Force Awakens, would be partly shot right here in Abu Dhabi and that the emirate’s sandy Western Region would play an integral role in the flick. Three years on and the film has finally arrived, and hits UAE cinemas on December 17 (a day before the international premiere). Here, What’s On gives you the lowdown on the film, and looks at how the emirate we call home ended up making it into one of the biggest movie releases of all time. 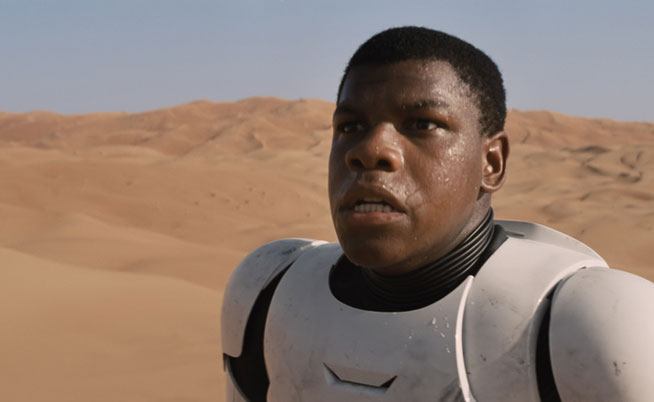 The movie was filmed in the Liwa desert last June – so we imagine the makeup department didn’t have to help John Boyega on the sweat front.

While the exact location remains a secret, filming is reported to have taken place in the Liwa area of the Western Region here in Abu Dhabi. Our rolling sand dunes double up as the barren desert planet Jakku, home to the film’s new female lead character Rey (played by British actress Daisy Ridley).

There are no abandoned sets in the desert

Despite rumours by some sections of the press, you won’t find a Tie Fighter or abandoned AT-AT Imperial walker if you go for a hike in Abu Dhabi’s Western Region. All the sets were packed away once filming finished. “The last thing we want is hordes of tourists driving around getting lost in the desert,” said a spokesman for Abu Dhabi’s local media company, twofour54.

You might get to see props in a museum

Daisy Ridley looking for an Adnoc in Abu Dhabi.

There are plenty of rumours though coming out from the emirate to suggest that props from the film could end up in a permanant museum on Saadiyat Island.

The UAE gets things done quickly

If you live in the UAE, you know anything is possible – and the Abu Dhabi government moved quickly to secure filming here, when many in Hollywood thought it couldn’t be done. “[We built] sets and roads in the middle of the desert in no time,” says twofour54’s CEO, Noura Al Kaabi.

A lot of people made the new movie

JJ Abrams and a mate on set in Abu Dhabi

It’s estimated around 700 people worked on the shoot in Abu Dhabi.

The Force Awakens won’t be the last Star Wars film to be made in the emirate, according to reports.

Look out for Jar Jar Binks 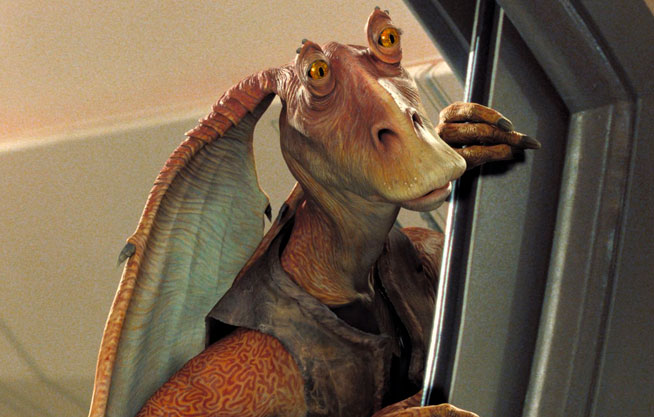 Jar Jar Binks – one of the universe’s most annoying aliens.

Back in June, the new film’s director JJ Abrams (the man behind the Star Trek reboots), said he might sneak the skeleton of Jar Jar Binks, the extremely disliked goofball alien from the prequel trilogy, into a scene in the new film in the desert. Was he joking? Or is our Abu Dhabi the final resting place of one of the most annoying characters in cinema history?

Abu Dhabi didn’t do too badly out of the shoot. It’s been estimated by twofour54 that filming has generated Dhs220 million worth of publicity for the capital.

10 QUESTIONS ABOUT THE MOVIE ANSWERED

Surprisingly, no one really knows – yet. Director JJ Abrams is famously secretive about his films and has done a great job of keeping the plot under wraps. What we do know is it’s set 30 years after the end of Return Of The Jedi. Jedi Knight Luke Skywalker has gone missing, the Empire is still in business (but is now known as The First Order) and the movie’s main baddie, Kylo Ren, is obsessed with the villain from the original trilogy – Darth Vader.

Look at those feminine curves.

Much of the pre-release publicity has surrounded cute robot BB-8, who has featured heavily in all the trailers (its body is the shape of a football). Lucasfilm president Kathleen Kennedy has referred to the astromech as a girl in interviews.

Arms appear to be in tact here.

There are rumours the furry wookie Chewbacca will lose an arm in the film, and sketches have been doing the rounds on the internet that show Han Solo’s right hand, er, walking carpet, with a robotic replacement. Whether the idea made it into the final cut remains to be seen.

04. It features a new set of siblings?

Speculation is growing that two of the film’s main characters are related – and we’re not just talking about Luke Skywalker and Princess Leia from the original trilogy. The Force Awakens’ main villain Kylo Ren (played by Adam Driver from hit US comedy TV series Girls) and desert scavenger Rey (played by Brit Daisy Ridley) are said to be brother and sister. But who are their parents?

One scene in recent Star Wars trailers shows Rey crying – and the fanboys have been going nuts as a result. Despite director JJ Abrams’ attempts at secrecy, the internet is full of gossip about a major character meeting their maker in the new movie. Some are claiming it’s an old favourite from the original trilogy, others are claiming it’s one of the new characters.

Has Luke turned to the dark side? He certainly looks like he’s pondering it here.

The trailers have been surprisingly light when it comes to footage of Luke Skywalker. Some film websites believe he’s in hiding and will hardly feature in the new film at all, others are claiming the big reveal will be that Mark Hamill’s character has turned to the dark side of The Force. Hamill himself hinted he’d like the character to turn evil in a TV interview a few years back. And the reason why people think it might be true? Abrams was on the same TV show…

Much has been made about Disney’s use of practical effects in this new film as opposed to CGI, but what hasn’t gained so much attention is just how much Abrams and Co have tried to make a film in the spirit of the original trilogy. The screenplay was co-written by Empire Strikes Back screenwriter Lawrence Kasdan and the movie’s makers have based a lot of its look on concept art from the original trilogy by illustrator Ralph McQuarrie.

08. Why don’t we know all about the characters yet?

With less than a month before the film is released, we still don’t know much about the roles played by three huge Hollywood names – Andy Serkis (the motion caption king who brought to life Gollum in the Lord Of The Rings trilogy), Max Von Sydow (Minority Report and the classic Flash Gordon), and Lupita Nyong’o (12 Years A Slave). Turns out Abrams is good at keeping secrets after all.

09. Can we expect any surprise celebrity cameos?

We imagine the flannel’s not part of the alien costume.

We know that Brit actor and Star Wars nut Simon Pegg is in it as an alien (he was in a behind-the-scenes video released by Lucasfilm), and there were rumours that Daniel Craig also snuck in a few shots dressed as a stormtrooper, a report the James Bond actor has gone on to deny. Another rumour claims Judy Dench will also appear in the film. “I’m not in it, but that would’ve been nice, wouldn’t it?’” she said.

Lando and Hans catching a break during the striking back of the Empire.

Another character featured heavily in the trailers is Finn, a stormtrooper who goes rogue, and is played by British actor John Boyega. There have been claims Finn is the son of one of the original trilogy’s characters, Lando (Han Solo’s mate from Empire Strikes Back).

Culture
Film
News
EDITOR’S PICKS
UAE holiday dates announced for Eid Al Adha
READ MORE
Another update: Emirates extends suspension of flights from India to UAE
READ MORE
Coming soon: Everything we know about Ain Dubai so far
READ MORE
Khorfakkan set to open new tourist attraction 580 metres above sea level
READ MORE
MOST POPULAR
It's Dhs350 to brunch, stay and play at the What's On Lock In this weekend
After party: 8 of Dubai's best after-brunch deals on a Friday
Jones The Grocer is bringing its cheese, grape and jazz night to Abu Dhabi
A two-day art festival is taking place in Alserkal Avenue this weekend
Transport to Greece as Opa's monthly brunch returns
Al Qana update: Abu Dhabi mega project announces four new F&B outlets
YOU SHOULD CHECK OUT
Our website uses cookies and other similar technologies to improve our site and your online experience. By continuing to use our website you consent to cookies being used. Read our privacy policy here.