Dubai is the world's most cosmopolitan city

Dubai is home to 2.4 million people: 83 per cent of those people that call the city home (at least for now) are foreign born. This is according to a new report by the International Organisation for Migration.

This means that Dubai is the world’s most cosmopolitan city.

It’s also one of the reasons we think the city is so great – you meet people from different countries every single day, and can sample a unique world cuisine every night of the month if you should so desire.

The new World Migration Report ranks cities based on the percentage of the population that is foreign born, and Dubai comes out on top.

*MORE: Dubai aiport is about to get bigger*
*REPORT: So is Dubai an expensive place to live?*

The other most culturally-diverse cities in the world are Brussels, Belgium (62 per cent), Toronto, Canada (46 per cent) and Auckland, New Zealand (39 per cent).

The phenomenal diversity of Brussels and Dubai are chalked up to the fact that the cities have “high mobility workforces”, with many people moving here for a period of time for career reasons.

It is estimated by YouGov that there are over 200 nationalities living in the UAE.

Here’s a larger list of the world’s most diverse cities (note that Dubai and Singapore are the only non-Western cities in the top 10): 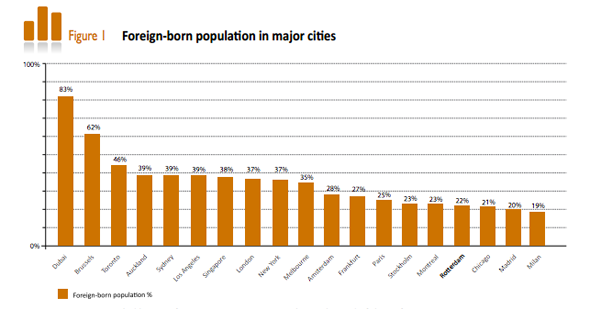 News
EDITOR’S PICKS
There's a five-day weekend coming up in the UAE, from December 1
READ MORE
The hottest restaurants, bars and clubs opening in Dubai in 2020
READ MORE
Dubai’s best Christmas Day brunches under Dhs500, including drinks
READ MORE
Sheikh Mohammed announces new 10 year UAE golden visa categories
READ MORE
MOST POPULAR
Will there be fireworks in Abu Dhabi for UAE National Day 2020?
Animals in Distress: This sweet rescue cat is looking for a forever home
You can now catch a movie on the slopes of Ski Dubai
Jack Whitehall to perform in Dubai this January 2021
Taste dishes from 15 of Dubai's top chefs at Reform this weekend
YOU SHOULD CHECK OUT
Our website uses cookies and other similar technologies to improve our site and your online experience. By continuing to use our website you consent to cookies being used. Read our privacy policy here.