What is going on with Dubai traffic this morning?

This morning some commuters woke up to surprisingly clear roads, while those taking Sheikh Zayed Road toward Sharjah are experiencing terrible jams.

The road was tail-to-tail from Tecom to Business Bay this morning, a route that is usually relatively clear. Why? Well because a new 16-lane flyover has opened. The catch is that the rest of Sheikh Zayed Road – the part we’ve driven down in the past when passing Business Bay – was completely closed this morning.

The opened-today bridge will take traffic over Dubai Canal toward Sharjah once the canal is completed. (The image above shows where the canal will run through once flowing.)

It looks like we’re now going through the growing pains traffic stage as the traffic is currently bottlenecking into a few lanes before diverting onto the beautiful new flyover, and people are slowing down as they drive due to the change. Whether the original lanes will be reopened soon is unclear (many of them will definitely disappear when they become water), however we’ll keep you updated if they do. The blockades this morning didn’t look permanent, so here’s hoping.

We imagine some lanes will be reopened before Thursday rush hour tonight. We’ll keep you updated.

Here’s what the traffic situation was at 8.50am this morning. Dark red means very, very bad: 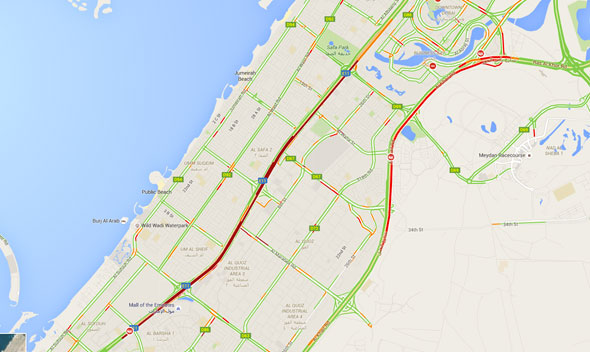 Here are all the people reacting to the jam on the traffic app Waze: 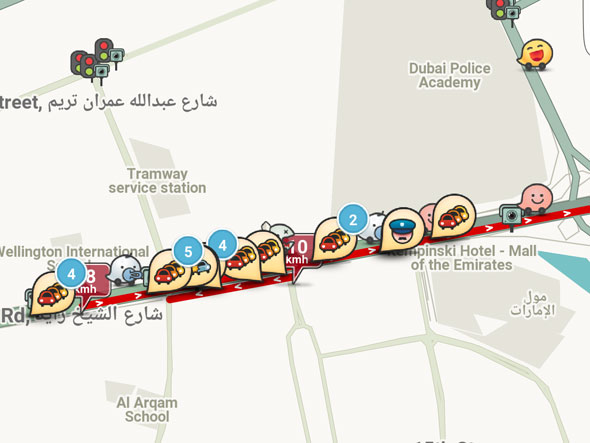 No good idea today SZR around business bay, only 2 lines on the way to the airport, 6 am and the traffic jam is getting huuuge! #dubai oommm

@RTA_Dubai Could new SZR canal bridge not been opened tmrw when quiet thereby saving disruption to thousands of journeys this morning?

Surprising no #traffic in #alnahda2 #dubai #UAE. I wonder why? pic.twitter.com/7HwnovNVad