Legoland Dubai gets its first resident - a giant red dragon

Legoland Dubai is opening later this year, and it has just received its first tenant in the form of an enormous Red Dragon that weighs more than 500kg and is made of over 230,000 Lego bricks.

Not only is the Red Dragon massive, but it’s also animated and features glowing eyes, a moving head and a mouth that chomps up and down. Oh, and it breathes smoke out of its nostrils. 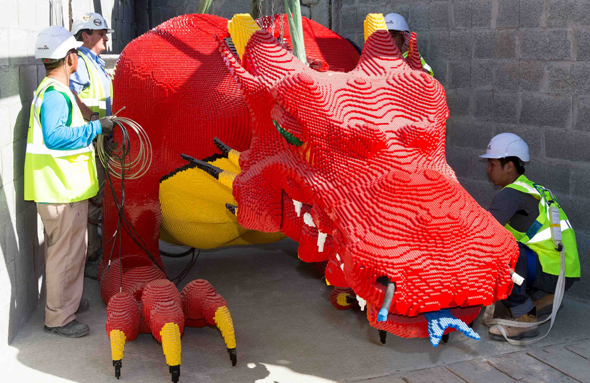 The dragon itself, smoke nostril tubes and all.

The Red Dragon will stand proudly as the largest model in the Lego Kingdom area, and one of the largest models in the Dubai park. It will play guard to the King’s treasure inside his home, which is the Legoland Castle.

The Red Dragon is just one of many models that will be found in the new Dubai theme park – there will be 15,000, and they will be made from a combined total of more than 60 million LEGO bricks.

A glimpse of what the dragon will look like once in the park.

The other two parks involved in the project include Motiongate Dubai (a Hollywood-themed park) and Bollywood Parks – they will all be connected by Riverland Dubai, a retail, dining and entertainment walkway.

News
Sport & Fitness
Staycations
EDITOR’S PICKS
Here's the full list of UAE public holidays in 2023
READ MORE
23 incredible things to look forward to in the UAE in 2023
READ MORE
Hidden gems: 10 UAE desert pop-ups to discover this winter
READ MORE
Where to travel in 2023: 10 new flight routes from the UAE
READ MORE
MOST POPULAR
26 of Dubai's best beachfront restaurants
8 wonderful things to do in Dubai this week: Feb 6 to 9
Where to go to get your Al Baik fix in the UAE
Reset and recharge with a relaxing staycation at this stunning Dubai hotel
The most expensive apartment in Dubai just sold for Dhs410 million
YOU SHOULD CHECK OUT
Our website uses cookies and other similar technologies to improve our site and your online experience. By continuing to use our website you consent to cookies being used. Read our privacy policy here.